For 2016, American health care providers will have delivered bad news to an estimated 1.7 million patients. “You have cancer,” they’ll have said. Thirty-five percent of these patients will eventually die from the disease, which actually is an improvement over past decades because of better cancer treatments. 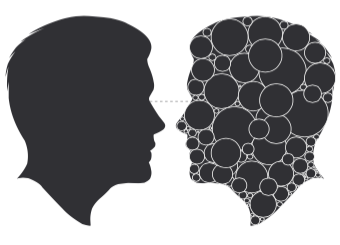 For 2016, American health care providers will have delivered bad news to an estimated 1.7 million patients. “You have cancer,” they’ll have said. Thirty-five percent of these patients will eventually die from the disease, which actually is an improvement over past decades because of better cancer treatments.1

Older treatments (eg, chemotherapy and radiation) are associated with formidable adverse effects. Fortunately, immunotherapy, the novel therapeutic strategy, takes a “fight fire with fire” approach by addressing some of the shortcomings associated with traditional cancer treatments.

Oncologists have long believed that the slashburn-poison approach (ie, surgery, radiation, antineoplastics) was insufficient, that we needed to target cancer’s molecular mechanisms and their effects on the immune system. Within the past 15 years, oncology researchers have made tremendous progress. Immunotherapy, also called biologic therapy or biotherapy, is a laudable breakthrough.2,3

Cancer and the Immune System

The immune system involves organs, specialized cells, and substances (eg, cytokines) that recognize other substances as foreign, or “non-self,” and activate when they sense intruders. Most of the time, it works efficiently to identify antigens. Cancer cells—cells that start in a patient’s organs, have aberrant apoptosis (programmed cell death), and grow rapidly&mdash;challenge the immune system in that it often fails to see them as foreign until the cancer has caused considerable damage. The immune system’s response may be inadequate in the face of rapidly growing cells, or the cancer cells themselves may secrete substances that fool the immune system.2,3 Immunotherapies (table 2,3) boost the immune system, lessening the chance that cancer can circumvent an immune response. They increase recognition of cancer cells and strengthen that response.

Which Tumors, Which Therapy?

Some immunotherapy has an established place in medical history. Researchers developed the Bacillus Calmette-Guérin vaccine against tuberculosis, discovering later that it provides a robust anti-tumor response when given to patients with bladder cancer.4 Approved in 1990, it is still the standard of care.5

Certain malignancies, especially renal cell cancers and melanomas, appear to be immunogenic and more resistant to conventional chemotherapy than others. Yet some immunogenic tumors still respond when exposed to high-dose cytokine therapy (eg, interleukin-2).6 Researchers tried administering cytokines with chemotherapy, but high rates of toxicity and insignificant improvements in survival outcomes stalled these efforts in all but a small subset of patients.7,8

The cornerstone of advances in immunotherapy was the realization that cancer cells and the immune system have a unique relationship. In cancer, antigen presentation is necessary, but still insufficient, to activate the immune system. Therefore, a second action, costimulatory signals to activate cytotoxic T cells, is necessary.9 Researchers’ discovery of inhibitory pathways, which squelch T-cell activation and promote tumorigenesis,10,11 shed light on a potential mechanism: blocking these pathways. The concept of checkpoint inhibitors was born, and agents developed along this line of thought have provided durable clinical responses in several cancers, even a few not considered immunogenic in the past.12-15 Immunotherapy’s success builds on our understanding of elimination, equilibrium, and escape (online figure 16). Looking at tumors as just a mass of cancer cells is short-sighted. Cancer is a constellation of factors, including stromal cells, immune cells, fibroblasts, and endothelial cells, each of which contributes to a tumor’s malignant potential and response to the immune system.16

• Some patients will experience early tumor responses, just as they do with chemotherapy. Immunotherapies destroy tumors by causing immune cells to infiltrate them. Tumors often appear enlarged on an x-ray or computed tomography scan before they begin to shrink (called pseudo-progression). Routine scans do not differentiate between malignant tumor tissue and normal infiltrating immune system cells and fluid.17,18 A tumor may swell as the immune system kicks in, suggesting malignancy growth. Tumor shrinkage may take more time than expected with traditional treatments.19

• Many patients will eventually respond, and that response can last years, even after immunotherapy ends.19

• Although melanoma outcomes have been linked to the development of vitiligo and responses to targeted therapies and cytotoxic chemotherapy are sometimes associated with specific toxicities,20 toxicity does not predict response to immunotherapy.

The pseudo-progression phenomenon has led to new immune response criteria that is used in lieu of the traditional Response Evaluation Criteria In Solid Tumors.19 So that they can exclude pseudo-progression, oncologists discontinue immunotherapy no sooner than 4 weeks after an initial scan showing progression. 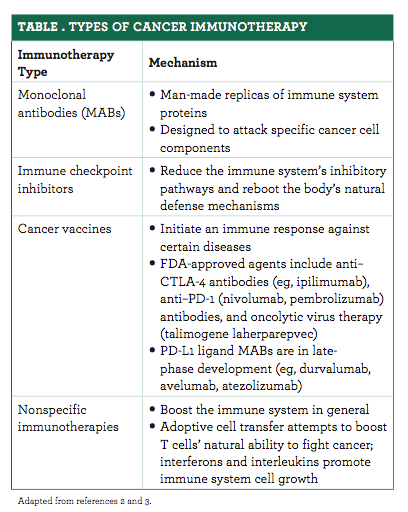 Some of immunotherapy’s challenges include measuring response and accurate, noninvasive pharmacological monitoring.17,18 The need for meaningful, accurate diagnostic tests that promptly reflect immunotherapies’ effects is apparent. For example, for oncolytic viruses, having tests similar to those used in HIV would allow physicians to base treatment on the actual level of the virus within the target cells.2

Immunotherapy has changed many an individual’s cancer prognosis, often lengthening time to progression and sometimes generating a cure. And the news continues to improve: researchers are using immunotherapy in other conditions. In Alzheimer’s disease (AD), several biologics (aducanumab, saracatinib, solanezumab) are in clinical trials and experts are cautiously hopeful that they will stop or significantly delay AD’s progression.21 With time, immunotherapy may offer new hope for many systemic diseases

Ms. Wick is a visiting professor at the University of Connecticut School of Pharmacy.