Cancer Screening: Let's Talk About It

Over the past 2 decades, the cancer death rate has drastically declined in the United States, falling 23% from its 1991 peak. This translates to 1.7 million lives saved. 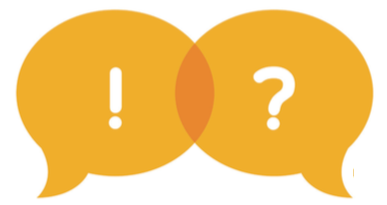 Over the past 2 decades, the cancer death rate has drastically declined in the United States, falling 23% from its 1991 peak. This translates to 1.7 million lives saved.1 For women alone, incidence rates also dropped or remained stable between 2003 and 2012, and similar improvements were noted in certain racial and ethnic groups.2 Statisticians largely attribute the good news to preventive efforts, early detection, and better treatments. Pharmacists are well positioned to educate patients about all of these. Screening is a particular challenge, however, because of the vast number of screening types and patients’ confusion about which tests are right for them—and when. Counseling sessions offer opportunities to discuss preventive medicine, such as immunizations, healthy lifestyles, and health screenings.

Who Should be Screened?

Cancer does not discriminate, and everyone has some risk. However, certain individuals and age groups are at elevated risk at different times and should be screened. See table 13-11 for a concise overview of the most common recommendations. Multiple organizations (eg, the US Preventive Services Task Force, American Cancer Society, National Comprehensive Cancer Network) have developed cancer screening recommendations. Because clinicians may use different guidelines, pharmacists need a working knowledge of basic recommendations.

Ideally, clinicians would be able to screen for all kinds of cancer, especially those that are the most aggressive and fatal, such as lung cancer and pancreatic cancer. Developing screening tests involves statistical and scientific analysis. Screening can be very costly, invasive, and complicated and may be more harmful than helpful.12,13 Therefore, expert organizations recommend screening procedures only if they are valid (eg, sensitive and specific) and reliably differentiate between individuals with and without a disease (table 214,15). Statisticians and scientists need to weigh these factors when choosing screening tests for the general population. 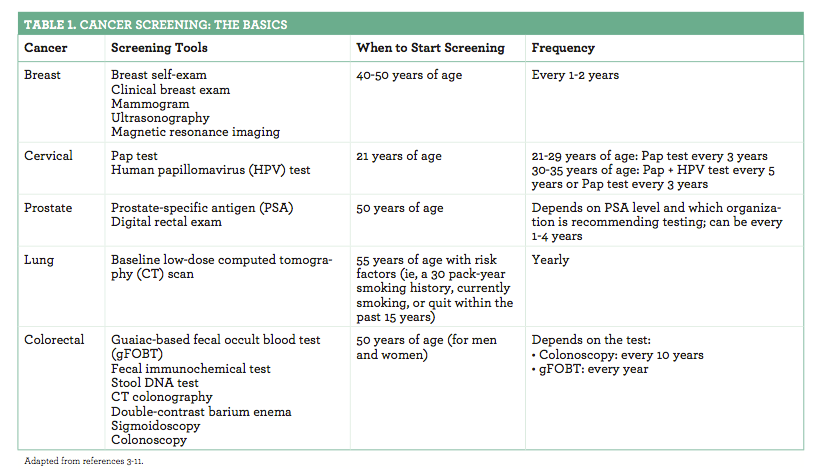 Screening can be as simple as a breast self-exam or as complex as a colonoscopy. Patients who are at the highest risk may require more than one type of screening test. For example, a woman with a first-degree relative (eg, mother) who had breast cancer has a 20% to 25% lifetime risk of developing this disease and may need early mammograms and annual magnetic resonance imaging. The patient’s decision may be influenced by her health insurance if it does not cover screening tests.10 Similarly, Medicare covers colonoscopies at no cost, but beneficiaries have a 20% co-pay for a double-contrast barium enema, which can detect smaller tumors and evaluate abdominal symptoms, such as blood in the stool and persistent constipation.11,16,17

Patients’ perceptions and preference can stand in the way of screening, as patients consider cost, benefits, comfort, and what they may have heard from friends and family. For example, consider patients at elevated risk for colon cancer. These patients often fear colonoscopy because of the bad reputation of bowel preparation. As an alternative, a fecal occult blood test can be done at home. Pharmacists who offer this alternative should counsel patients that the test does not detect polyps and that an additional test may be needed if the lab detects blood in the stool. 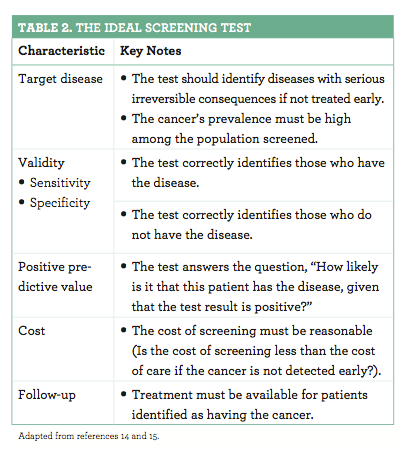 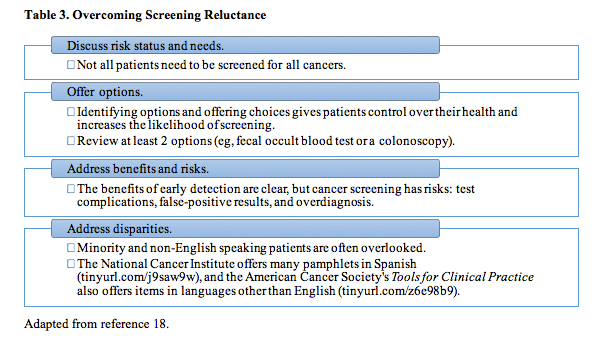 The number-one reason why patients skip cancer screenings is a health care provider did not recommend it.18 Pharmacists can step up, recommend appropriate screenings, and address patients’ reservations with rational explanations. Although screenings have risks (eg, complications from procedures, false-positive results), detecting cancer early increases the likelihood of cure. Pharmacists who develop screening algorithms, make recommendations, and persistently and politely remind patients can make a difference.

Ms. Sharabun is a 2017 PharmD candidate, and Ms. Wick is a visiting professor at The University of Connecticut School of Pharmacy.