E-Pedigree: An Inevitability for the Industry

Despite the hefty price tag for implementing e-pedigree technology, it will become a reality in the coming years.

As President Barack Obama pushes a plan to bring electronic health records (EHRs) for all Americans over the next 5 years, many in the pharmaceutical drug industry are working to become compliant with existing or upcoming electronic pedigree (e-pedigree) regulations. With the global drug counterfeiting epidemic going strong, more and more states have some form of legislation in place requiring e-pedigree technology in order to ensure drug safety in the supply chain, from the manufacturer to the pharmacy. Although the technologies are available, implementation takes time and money—to the tune of several million dollars for a large manufacturer or distributor.

"A good amount of manufacturers and distributors have realized that this is going to take time," said John Krachenfels, IBM Pharmaceutical Track & Trace Solutions executive. "It's certainly a multimillion-dollar project for a large manufacturer, but the benefits are there."

The estimated $40-billion worldwide counterfeit drug trafficking trade continues to thrive. Although the World Health Organization reports that counterfeit drug issues exist mostly in developing countries and occur rarely in the United States, the national trend toward states enacting e-pedigree laws is growing. According to the Healthcare Distribution Management Association, 29 states throughout the country have some form of e-pedigree legislation either in place or in the works.

The federal government also is on board. In 1987, Congress passed the Prescription Drug Marketing Act, which included a paper-based drug pedigree component. Nationwide e-pedigree legislation has yet to be enacted, but it is in the works. The FDA forecasted e-pedigree for all products by next year. Considering President Obama's championing of EHRs, it appears likely that e-pedigree regulations will soon be forthcoming. In addition, countries around the globe are working to fight what has become a growing epidemic. 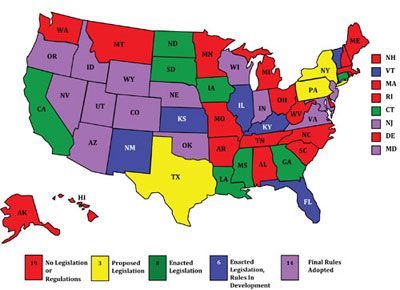 California is perhaps a microcosm of the country in terms of the e-pedigree issues faced by those in the drug industry. The state legislature passed S 1307 in 2004, which consisted of anticounterfeiting and antidiversion regulations. Although the law included e-pedigree provisions, those portions were not implemented at the time. Instead, later legislation moved the enactment of the e-pedigree regulations to 2009, at which time no drug in the supply chain could be sold, traded, or transferred without an e-pedigree.

Those in the industry scrambling to get e-pedigree solutions into place caught a break last spring. The California Board of Pharmacy voted to delay the legislation for another 2 years, until January 1, 2011. More recently, stragglers on the road to e-pedigree compliance had the good fortune of seeing the legislation delayed again, until 2015. The postponed regulations will arrive on a graduated schedule—manufacturers must have 50% of drugs serialized by 2015, and 100% by the following year. For wholesalers, the deadline is 2016, and pharmacies must become compliant by 2017.

"The drug pedigree requirement was scheduled to go into effect in 2011 to provide a system of tracking prescription drugs from the point of manufacture until they reach a pharmacy or hospital to prevent the counterfeiting, diversion, or misbranding of drugs. However, there are a number of complexities that make it difficult to meet the 2011 date," stated California Sen Mark Ridley-Thomas, author of S 1307, after the 58-1 California State Assembly vote to delay the deadline once again. "All vested parties, including consumer protection advocates and pharmaceutical manufacturers and distributors, have reached resolution and have identified a reasonable and workable solution that will allow additional time and flexibility to comply with current requirements."

Changes to the slated e-pedigree regulations have been made along the way, including the grandfathering of existing drug supplies and a call for regulations on drugs sold via drop shipment and the use of inference, or the appraising of a package's contents without opening it. These changes helped to address what some in the industry saw as a lack of specificity in the upcoming regulations. Further, the revised law includes provisions to put California's requirements on par with those of the federal government, when a national e-pedigree law is enacted.

"This critical proposal will ensure California's current e-pedigree law achieves full implementation, thereby creating an efficient tracking system so consumers and the health care industry have a reliable resource that guarantees pharmaceuticals are safe and of the highest standard we have come to expect," said Sen Ridley-Thomas. "S 1307 will propel California to the national forefront and set the gold standard for the safety of pharmaceuticals as it did with curbing greenhouse emissions."

Once the standard is officially set, noncompliance will come with any number of penalties, including civil fines, injunctions, or prosecution. Fines could reach up to $5000 per occurrence, which means that amount would be levied on each salable unit that does not meet regulations. Formal action against licensees is another possibility. Officials plan to conduct monitoring in several ways—through regular, unannounced inspections, investigation of consumer complaints, and referrals from other agencies.

For those in the business of selling e-pedigree solutions, the impending law in California is a boon. "The California pedigree legislation has really served as a catalyst for the industry," said Krachenfels.

With a minimum of >5 years to prepare for the coming regulations, one might think the California drug industry has plenty of time to get up to snuff with e-pedigree. Not so. E-pedigree solutions can take up to 5 years to implement for manufacturers, according to Krachenfels.

Cost also is a factor. Although exact numbers vary depending on the size of a company, Krachenfels estimated the lifetime costs of e-pedigree implementation for a large distributor or manufacturer to be somewhere in the millions. Not only do drug companies have to purchase the necessary software, packaging must be redesigned in order to incorporate bar-coded serial numbers. For all affected companies, total costs go beyond the price of first implementing the technology, according to Internet infrastructure services company VeriSign, which markets e-pedigree solutions. Upgrades are an inevitability with all technology products, but are particularly so with e-pedigree due to regulatory evolution.

Whereas regulations are fueling the drive toward e-pedigree implementation for most, Krachenfels was quick to point out business benefits to be gleaned by getting on board. "I think the business benefits are becoming more evident to companies going down this path," said Krachenfels.

Inventory management is an area positively impacted by the technology. Recalls can be conducted with much greater efficiency using e-pedigree technology, allowing for precise targeting of the merchandise in question. Users can enjoy the same ease and accuracy with returns, said Krachenfels. Most importantly, with e-pedigree solutions, there is never a question about the authenticity of a drug. "This has always been about patient safety."

SupplyScape, a company that touts its creation of the first serialized e-pedigree model, pilot, and commercial deployment, also makes assertions about advantages that go beyond mere regulatory compliance. Its e-pedigree solution helps companies to reduce business risks and successfully find their way in an ever-changing "uncertain business environment," the company notes. In addition, SupplyScape professes the overall improvement of business operations, as well as financial benefits, that come as a result of employing e-pedigree.

"Companies that adopted the technology for e-pedigree are now proceeding to improve their supply chain practices through lower inventory costs, better supply chain visibility, and other business values," said Shabbir Dahod, SupplyScape chairman and founder. "We've maintained all along that the best situation for the industry would be for all trading partners, including manufacturers, to leverage their pedigree data for their business value, not just to meet regulatory requirements."