Women whose cholesterol levels are either too high ortoo low run the risk of delivering premature babies, accordingto researchers from the National Human GenomeResearch Institute (NHGRI), part of the National Institutes ofHealth.

The researchers confirmed previous findings from otherresearch groups that found that very high cholesterol levelscan increase the risk of a premature birth.

The NHGRI investigators also found, however, that maternalcholesterol levels that are below average could lead toadverse birth outcomes, including premature birth and lowinfant birth weight. In addition, a trend toward smaller infanthead sizes was noted. The new findings were published inthe October 2007 issue of Pediatrics.

The researchers studied 1058 women, aged 21 to 34years, and their newborns and found that about 5% of thewomen with cholesterol levels in the moderate range of 159to 261 mg/dL gave birth prematurely. Women whose levelswere less than 159 mg/dL, however, had a 21% incidence ofpremature births. Full-term babies born to women with lowcholesterol weighed an average of 5 oz less than similarbabies born to women with moderate cholesterol. In previousstudies, it had been shown that about 12% of womenwith levels above 261 mg/dL also gave birth prematurely.

Link Between Cholesterol and HeartDisease: It?s in the Details

Researchers from St. Louis University School of Medicinehave found details regarding the link between cholesteroland heart disease that might aid in the development of newheart disease treatments. They found that cholesterol contributesto atherosclerosis by suppressing the activity of akey protein, transforming growth factor-?, which protectsthe heart and blood vessels. The researchers hope that thisfinding could answer questions about other diseases thatare associated with high cholesterol levels, including certaincancers. The findings were published in the October 15,2007, edition of the Journal of Cell Science.

The researchers also found that cells with higher cholesterollevels stimulate an inflammatory response. ?Cholesterolin various chemical forms is very prone to being oxidized,[and] the oxidized form of the cholesterol turns out tobe very toxic to cells,? the investigators stated.

Many doctors fear that when they prescribe medicationsto their patients diagnosed with high cholesterol the patientswill take the medicines as a license to eat unhealthily andincrease their fat intake. A study from the Mount Sinai Schoolof Medicine shows, however, that these patients insteadcombine their medicines with a heart-healthy diet to staveoff heart disease.

The researchers collected data on 71 patients who weretaking statins to prevent heart disease. They interviewed thepatients when they started taking the medicine, 3 monthslater, and 6 months later. They found no significant change inhow much saturated fat the patients ate in their regular diets.

The investigators encouraged doctors to continue stressingthe importance of lifestyle and dietary changes in conjunctionwith medication therapy to their patients with highcholesterol. Their findings were published in the August 2007issue of Mayo Clinic Proceedings.

British researchers have suggestedthat children as young as 15 monthscould have their cholesterol levelsscreened to determine future risk ofheart disease.

They based their suggestion onresearch into familial hypercholesterolemia,where high cholesterol runsin families. The condition affects about2 in every 1000 people and causes veryhigh levels of low-density lipoproteins(LDLs), increasing a patient's risk ofdeath from coronary heart disease. Theresearchers' findings appear in theSeptember 2007 issue of the BritishMedical Journal.

The investigators looked at publishedstudies on total and LDL cholesterollevels in people with and without familialhypercholesterolemia to figure outthe most efficient way to screenpatients and at what age. They foundthat screening was most effective ifdone in early childhood (1 to 9 years),which detected 88% of affected patients.Screening newborns and youngadults was not as effective.

Once a child was identified as affected,his or her parents would bescreened as well, and the affected parentwould be treated for high cholesterolright away. The child would betreated in adulthood. 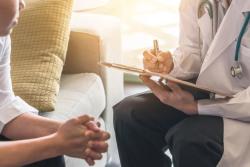