Antipsychotics for Children With ADHD Should Be a Last Resort

Careful treatment selection can prevent lifelong and serious complications from these medications.

A growing concern is that prescribers may be using such drugs for nonpsychotic conditions in which experts and guidelines recommend psychosocial interventions as first-line treatment. These conditions include disruptive behaviors and attention-deficit hyperactivity disorder (ADHD), with the latter accounting for about half of all antipsychotic drug use in children.1,8-11 This is not a new concern. More than 10 years ago, the Agency for Healthcare Research and Quality raised concerns and recommended that organizations monitor antipsychotic medication use in children.12 The Healthcare Effectiveness Data and Information Set has included a measure for this perceived problem since 2015.

A primary concern is the potential for significant adverse effects (AEs) in children who experience long-term exposure to these drugs. Pharmacists are well aware of antipsychotics’ adverse metabolic effects (ie, hyperlipidemia, hyperprolactinemia, increased risk of type 2 diabetes, and weight gain).13,14 These conditions have lifelong implications. Other serious risks include cardiac arrhythmias, extrapyramidal AEs, liver toxicity, sedation, and somnolence.2-7 Aripiprazole and quetiapine carry a boxed warning indicating that in adolescents, children, and young adults who take antidepressants for major depressive disorder and other psychiatric disorders, risk of suicidal behavior and thinking is elevated. (Note that although aripiprazole and quetiapine are not FDA approved for depressive episodes in bipolar I disorder or as adjunctive treatment for major depressive disorder in pediatric patients, they carry this warning.3,5) A recent study found that using antipsychotic doses higher than 50-mg chlorpromazine equivalents was associated with an increased risk of unexpected death 3.5-fold higher than in children treated with lower doses or those who did not receive an antipsychotic. Thus, the concern is evidence based.15

ADHD often occurs in conjunction with other mental health conditions. Common comorbidities include conduct disorder (depression, or oppositional defiant disorder),16 and prescribers may use antipsychotic drugs to augment other approaches. The evidence does not support using antipsychotic medication for depression in youths, but some data support a risperidone trial for conduct disorder or oppositional defiant disorder in stimulant-resistant youths with ADHD.16-24

A second concern is aggression. Aggression that stems from poor impulse control is common in youths who have ADHD,25 and it frequently occurs in children who have comorbidities. This behavior is often associated with a need for assessment, hospitalization, or urgent care and requires careful follow-up and cautious risk assessment.26 ADHD may not respond to stimulant medications, so prescribers may use antipsychotic drugs off-label in an effort to reduce aggressive outbursts.27,28 Research shows that antipsychotic-treated youths with ADHD often have clinical characteristics associated with aggression. However, few youths with ADHD who were treated with antipsychotics received the evidence-indicated trial doses of 2 stimulants before an antipsychotic.25

Pharmacists can monitor antipsychotic drug prescribing and make a valuable recommendation to the pediatric treatment team. Table 2 lists some guidelines.15,29,30 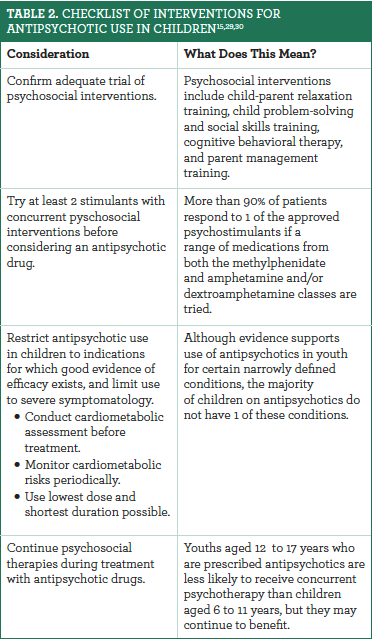 ADHD can be challenging for health care providers and parents and often has difficult-to-treat comorbidities. Careful selection of treatments can prevent lifelong and serious complications.

Jeannette Y. Wick, MBA, RPh, FASCP, is the assistant director of the Office of Pharmacy Professional Development at the University of Connecticut School of Pharmacy in Storrs.