Anticoagulants, Antiretrovirals Can Prevent Strokes in AF for Patients With HIV

Conduct proper review and evaluation of ARV and DOAC pharmacokinetics and metabolism prior to recommending treatment.

Significant morbidity and mortality are associated with an aging population because of cardiovascular disease, which is very common in individuals with HIV. Atrial fibrillation (AF), the most common type of cardiac arrhythmia, increases with the severity of HIV disease, with a 40% increase with a CD4 cell count of less than 200 cells per mm3 and a 70% increase with an HIV viral load greater than 100,000.3 Overall, the rate of AF in individuals with HIV per year is about 3.6.4

An estimated 2.7 to 6.1 million people in the United States had AF in 2010, and that number is expected to rise to between 5.6 and 12 million by 2050.5 More than 750,000 hospitalizations occur each year, causing an annual increase of about $6 billion in medical costs. Per-person medical costs for individuals with AF were $8705 higher than for those who did not have the condition.5

There are numerous risk factors associated with AF, including advanced age, chronic kidney disease, diabetes, European ancestry, heart failure, hypertension, hyperthyroidism, and obesity.6 Moreover, the increased risk of stroke associated with AF is 5 times more severe and causes 15% to 20% of all ischemic strokes.6

Randomized trials tested the long-term use of antithrombotic agents in patients with nonvalvular AF from 1966 to 2007.7 Compared with a placebo, adjusted-dose warfarin reduced the risk of a stroke by 64%.7

Gradually, the era of direct oral anticoagulants (DOACs), such as apixaban (Eliquis), dabigatran (Pradaxa), edoxaban (Savaysa), and rivaroxaban (Xarelto), has taken the market by storm. DOACs are becoming more favored by patients and physicians.

Countless AF studies have been conducted to assess the efficacy and safety of DOACs in patients with nonvalvular AF. The open-label, randomized RE-LY trial (NCT00262600) comparing dabigatran and warfarin has shown an annual rate of stroke and systemic embolism of 1.1% and 1.7%, respectively.6 The annual rate of stroke and systemic embolism was 2.1% with rivaroxaban and 2.4% with warfarin in the ROCKET- AF trial (NCT00403767).6 ARISTOTLE (NCT00412984), comparing apixaban and warfarin, has shown an annual stroke and systemic embolism rate of 1.3% and 1.6%, respectively.6 Additionally, in the EngageAFTIMI48 trial (NCT00781391), the annual rate of the conditions was 1.6% with edoxaban and 1.8% with warfarin.6 There is major concern about the lack of ability to monitor the level of anticoagulation with the newer agents.

The coadministration of some ARVs with non-ARV medications may be contraindicated or require dosage adjustment. All NNRTIs and PIs are metabolized by the hepatic CYP 450 system, particularly CYP3A4.

All PIs are CYP3A4 substrates. They are either inducers or inhibitors of other CYP isoenzymes or P-glycoprotein (P-gp). NNRTIs are substrates of CYP3A4, and can act as inducers, inhibitors, or mixed inducers.

Warfarin is metabolized in the liver by the CYP 450 enzymes, with the R enantiomer metabolized by CYP3A4, CYP1A2, and CYP2C19 and the S enantiomer by CYP2C9.9 PIs, such as atazanavir, darunavir, ritonavir, saquinavir, and tipranavir combined with ritonavir, have been shown to inhibit CYP 2C9 or 3A4. Hence, a 20% reduction in warfarin dose may be required.9

Other NNRTIs, such as efavirenz (3a4), etravirine (3a4), nevirapine, and rilpivirine, can induce 2C9 or 3A4, causing an increase in the warfarin dose that is required to maintain the therapeutic international normalization ratio range of 100% to 140%.9 Hence, the challenge to treat patients with HIV who are anticoagulated with warfarin for stroke prevention is convoluted.

There are interaction possibilities at the level of absorption or first transformation and at the level of metabolism and excretion. The PI ritonavir, which is a strong 3A4 inhibitor, is more likely to precipitate a clinical effect when used with certain DOACs, such as Eliquis and Xarelto, concomitantly.11

Dabigatran appears to be favorable for patients who have HIV with AF. The Department of Health & Human Services’ Guidelines for the Use of Antiretroviral Agents in Adults and Adolescents Living with HIV recommend specific adjustments if the administration of an ARV and DOAC is necessary.

A 50% Eliquis dose reduction and toxicity monitoring are required when the drug is combined with Elvitegravir/Cobicistat (EVG/c).12 The coadministration of betrixaban, dabigatran, edoxaban, and rivaroxaban and EVG/c is not recommended.12

Individuals with HIV have an increased risk of AF and stroke. DOACs provide the promise of more convenient and safer anticoagulation. However, concerns arise about the lack of an antidote for some of these agents. In addition, periprocedural management remains questionable. Although guidelines recommend DOACs as alternatives to warfarin, because of increased efficacy and safety, it is important to conduct a proper review and evaluation of ARV and DOAC pharmacokinetics and metabolism prior to recommending treatment in individuals with HIV to prevent stroke in AF. 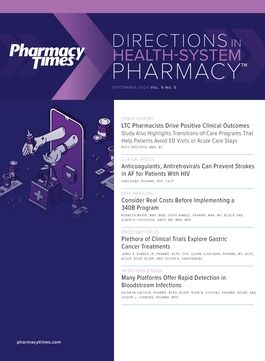 Using Anticoagulants to Treat Patients With Obesity Presents Challenges
Many Platforms Offer Rapid Detection in Bloodstream Infections
Plethora of Clinical Trials Explore Gastric Cancer Treatments
Anticoagulants, Antiretrovirals Can Prevent Strokes in AF for Patients With HIV
Consider Real Costs Before Implementing a 340B Program
LTC Pharmacists Drive Positive Clinical Outcomes
Patient Assistance Programs Are the Good, the Bad, and the Ugly
Asembia offers a complete ecosystem of products and services focused on financial solutions and contracting programs to the specialty pharmacy market.
When Will a Vaccine Be Ready?
Related Videos
Related Content