Iodine and Fertility
2018-06-28 14:00:00
Kathleen Kenny, PharmD, RPh
In general, infertility is described as an inability to conceive despite having frequent, unprotected intercourse for a year or more. However, because fertility is inversely proportionate to age, many women over 35 are evaluated for infertility after 6 months.1

About 12% of women aged 15 to 44 years in the United States have difficulty getting or staying pregnant, regardless of marital status.1

Iodine
Although there are many nutrients and trace minerals involved in conception, iodine is among the most important. Iodine is a nonmetallic trace mineral essential to the function of the thyroid. In turn, the thyroid is responsible for manufacturing the hormones thyroxine (T4) and triiodothyronine (T3). These hormones are responsible for regulating various enzymes and organic processes required for life. Examples include cell division and metabolism; growth, development, and repair of the body; immune system function; mental state; ovulation; and weight management.2

The CDC estimates that 2 billion people worldwide are deficient in iodine.3 Fortification of salt with iodine has been one of the most successful nutritional interventions, leading to 71% of the world’s households’ having reasonable access to iodized salt.3

Salt iodization has resulted in increased intelligence quotient points and a significant decline in the prevalence of iodine deficiency disorders such as hypothyroidism.3 New research has suggested that iodine also has an important impact on fertility.4

Results from a recent population-based prospective cohort study by the Eunice Kennedy Shriver National Institute of Child Health and Human Development have shown that moderate to severe iodine deficiency is associated with a decrease in fecundability, or the probability of becoming pregnant within a given period of time.5

The study consisted of 467 American women who were trying to become pregnant. Women with moderate to severe iodine deficiency showed a 46% decrease in the likelihood of conception compared with women with normal iodine levels.6 Even women with a mild iodine deficiency had a more difficult time conceiving, though this difference was not statistically significant, according to investigators led by James Mills of the US National Institute of Child Health and Human Development.6

“The Western diet has changed in the last few decades, and the adoption of vegetarian and vegan diets [has] led to a reduction in dietary iodine consumption,” said Tomer Singer, director of reproductive endocrinology and infertility care at Lenox Hill Hospital in New York, New York.6

Recommended Daily Allowance (RDA)
The RDA of iodine varies based on age, pregnancy status, and lactation status. For a complete table of RDAs of iodine, see Table 1.7 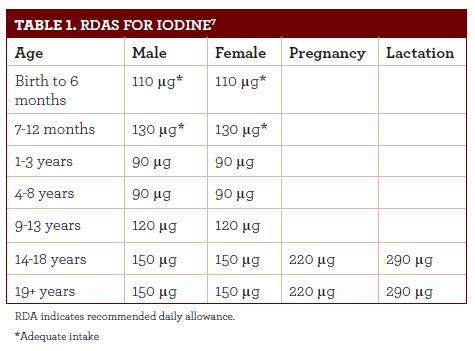 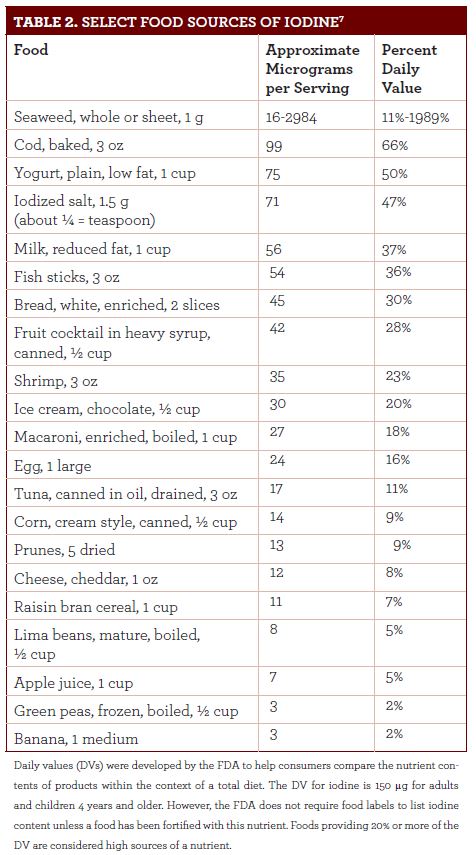 Conclusion
This new study highlights an important link between fertility and nutrition. Although this is just 1 study and further studies on larger scales are needed, the evidence suggests a causal relationship between a moderate to severe deficiency in iodine and decreased fertility. Not only is iodine very important for conception, but it is also critical during and immediately after pregnancy, as well as during lactation. The consensus is that women should take iodine and folic acid containing prenatal vitamins for 3 months before trying to conceive and continue taking them throughout lactation.
Kathleen Kenny, PharmD, RPh, earned her PharmD from the University of Colorado Health Sciences Center in Aurora. She has more than 25 years of experience as a community pharmacist and is a freelance clinical medical writer based in Colorado Springs, Colorado.
References
36753
Iodine and Fertility
In general, infertility is described as an inability to conceive despite having frequent, unprotected intercourse for a year or more.
/publications/issue/2018/June2018/iodine-and-fertility