Affairs of the Heart: Cardiovascular Disease in Women Vs Men

Atherosclerosis affects both genders, but its profile in women is unique. For example, 42% of women who have heart attacks die within a year, compared with 24% of men.

Surprisingly to many people, heart disease is the No. 1 killer of American women. One-third of women also die from heart-related episodes. Atherosclerosis affects both genders, but its profile in women is unique. For example, 42% of women who have heart attacks die within a year, compared with 24% of men.1 Traditionally, clinicians and investigators thought that estrogen was cardioprotective. However, later research disproved this theory, and even premenopausal women can experience serious heart disease.2

In general, risk factors that increase the likelihood of symptomatic heart problems are similar for men and women (Table 1).1,3-6 Diabetes is a stronger contributor in women, doubling the likelihood of death.7 Smoking also accelerates heart disease in women faster than in men.8 Individuals who have 1 risk factor have twice the risk of heart disease as those who do not. Once an individual accumulates 3 risk factors, she has 10 times the risk. Addressing modifiable risk factors can slow or stop heart disease’s progression, and women’s hearts respond better to healthy lifestyle changes than men’s do.1

Misdiagnosis of heart disease in women is common, which is why it is important to identify symptom differences (Table 2).1,3,9 An essential fact to remember is that most patients who experience a myocardial infarction (MI) report that their symptoms—the magnitude of pain and location of discomfort or associated symptoms&mdash;were different from what they expected.10 Among women who die from MI, nearly two-thirds had no history of chest pain.1 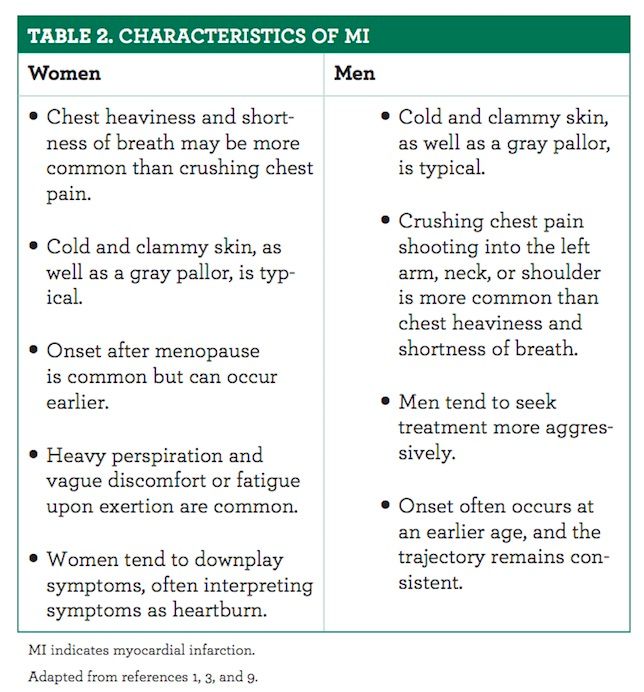 The 2013 American College of Cardiology and American Heart Association Guideline on the Assessment of Cardiovascular Risk introduced a calculator that determines an individual’s 10-year risk of heart disease or stroke, and numerous organizations have online calculators on their websites. Use of these calculators is controversial, but they do set a threshold for intervention.11 Clinicians need to know that a common tool used to assess patients is less accurate in women than in men. To understand why, clinicians need to differentiate between atherosclerotic cardiovascular disease (ASCVD), which affects the large arteries, and microvascular (or ischemic or nonobstructive) disease (MVD), which affects cardiac arterioles. In ASCVD, plaque gradually occludes large coronary arteries and may eventually completely block blood flow. In MVD, plaque builds evenly within the walls of small arteries. Blockage may not occlude blood flow completely but cause ischemia. Women, especially younger ones, are more likely than men to have MVD. Between 2 million and 3 million women in the United States have MVD.11

Clinicians rely on conventional testing, such as coronary angiography and stress testing, to diagnose ASCVD. Coronary angiography uses dye and x-rays, graphically displaying the large coronary arteries. Coronary angiography will not identify MVD, however, making it less useful in women.11 One alternative screening method, the Duke Activity Status Index (DASI), is a better measure of MVD.6,12 MVD symptoms often occur during routine daily tasks, such as cooking, gardening, and shopping, and the DASI identifies patients whose angiography results are negative but who experience ischemia.

Aspirin is a mainstay of cardiac care, but its effects vary by gender also. Consider 2 studies:

It is difficult to compare these 2 studies precisely because participants differed in age, aspirin doses, baseline rates of MI, and time. Regardless, aspirin’s effects are different in men and women.

The underlying explanation is both apparent and elusive. Aspirin’s molecular pharmacology is identical, regardless of gender, which suggests that men and women would respond identically. But gender influences aspirin’s pharmacodynamic profile. After identical doses, women experience salicylate levels higher than men do, and platelets also behave differently, causing a less-than-predictable antithrombotic effect. Further, women’s vascular anatomy differs from men’s; women have smaller coronary arteries. (Interestingly, when a woman’s heart is transplanted into a male recipient, these arteries enlarge, even if the woman’s body surface area was larger than the man’s.) Additionally, atherosclerotic plaque distribution, carotid anatomy, electrical repolarization, and vascular reactivity differ based on gender. Some of these differences may be hormonal, as estrogen upregulates prostacyclin production.13