Rhinovirus in the Elderly: The Commonest of Colds
2015-01-09 10:28:57
Jeannette Y. Wick, RPh, MBA
Rhinovirus infection tends to aggravate other conditions in the elderly. 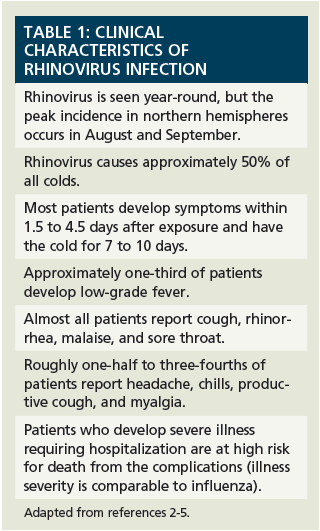 Globally, acute respiratory tract infections are the most common of all illnesses; they are generally caused by rhinovirus, adenovirus, coronavirus, and (of course) influenza.1 Influenza is associated with the most severe respiratory viral illness (RVI), but rhinoviruses—which manifest as the common cold—cause the greatest number of RVIs. Rhinovirus usually causes a milder clinical syndrome (Table 12-5) than influenza does,2 but rhinovirus may progress to acute sinusitis and often exacerbates other pulmonary conditions.3 Having a rhinovirus infection does not preclude having another viral or bacterial infection, and patients with concurrent infections are at increased risk for severe illness.2,6 In elderly patients, rhinovirus infection can lead to serious trouble.

Among individuals older than 65 years, increased susceptibility to infection occurs in those who have lower humoral and cellular immunity, impaired physiologic function, impaired mobility, or immunosuppression. Pharmacists need to acknowledge the varied presentation of rhinovirus infection among the elderly, in whom atypical clinical presentations and discordant disease severity are common. Seniors may have signs and symptoms that are milder—or more severe—than expected. Clinicians need to adjust their therapeutic approach, taking comorbidities (especially chronic lung disease), organ failure associated with senescence, and polypharmacy or polymedicine into consideration.3,7,8

Seniors who contract rhinovirus may be afebrile or feverish and often have no cough or headache. They may, however, experience changes in cognition, myalgia, or pleural pain.7 Elders infected with rhinovirus are significantly more likely than their younger counterparts to be forced to restrict their activities or require consultation with a medical professional. Rhinoviruses cause more lower respiratory illnesses in the elderly, increasing the likelihood that these patients will need to see a physician and restrict physical activity.8 The greatest concern about rhinovirus infection in the elderly is its propensity to aggravate other conditions, setting the stage for increased morbidity and mortality. Community-Acquired Pneumonia
Individuals older than 75 years are 50 times more likely to acquire community- acquired pneumonia than younger adults and are significantly more likely to die as a result.7 Although multiple pathogens cause community- acquired pneumonia, rhinoviruses (there are 99 recognized types of human rhinovirus) are often involved as a causative agent or precursor. Consider this: researchers studied 191 patients with pneumococcal pneumonia, stratifying them into 2 groups. Patients with a Pneumonia Severity Index score of 91 or higher (n = 99) were considered to have severe illness, whereas those with a score less than 91 (n = 92) were considered to have nonsevere illness. Forty-eight patients (52%) had RVIs before developing pneumonia, and about 10% of those infections were rhinoviruses. Having a preceding RVI doubled the likelihood of developing severe pneumococcal pneumonia.9

Asthma
Respiratory viruses, especially rhinoviruses, have been linked to the development and exacerbation of asthma. Patients with allergic sensitization are especially at risk. Rhinovirus can precipitate asthma attacks, and roughly 20% of adults with mild to moderate asthma develop wheezing and increased bronchial reactivity when infected.3 Researchers suspect that after viral infection, immunoglobulin E– mediated pathways block critical type I interferon responses, allowing viruses and allergens to induce asthmatic disease cooperatively and synergistically.10

Chronic Obstructive Pulmonary Disease
Chronic obstructive pulmonary disease (COPD) is an inflammatory lung condition that is associated, in large part, with the cumulative effect of years of smoking. Thus, it is a disease of older adults. Rhinovirus exacerbates COPD, and patients with COPD are at increased risk for bacterial infection following rhinovirus infection. In patients with COPD who develop rhinovirus infection, it appears that bacteria already present in the lung proliferate. (This bacterial burden has not been noted in otherwise healthy individuals.) Rhinovirus seems to precipitate secondary bacterial infections and hospitalization in those with COPD.8,11,12

On the other hand, results of a recent study showed that after intranasal inoculation with rhinovirus, patients with AR had fewer and less severe cold symptoms if allergic inflammation was induced before viral inoculation. These results suggest that allergy may attenuate respiratory viral disease.14

Conclusion
During a typical 74-year life span, humans will experience cold symptoms for about 1800 days (approximately 5 years). Because most patients are not tested for a specific virus when they contract a cold, pharmacists need to assume the condition is viral and that about half of the infections are due to rhinovirus. Preventing or actively managing rhinovirus infections in elderly patients can reduce complications (Table 2).8,10,11

Ms. Wick is a visiting professor at the University of Connecticut School of Pharmacy.
References