These health care professionals should receive education on how to prevent opioid misuse.

A 2018 article in the American Journal of Public Health addressed prescription opioid abuse in veterinary medicine. The article reported on a study by Lee S. Newman, MD, MA, FACOEM, FCCP, founding director of the Center for Health, Work, and Environment at the Colorado School of Public Health in Aurora, that looked at whether veterinary medicine has contributed to the opioid abuse problem in the United States. The study was based on a 2014 survey of 189 veterinarians in Colorado.

In the survey, 62% of the veterinarians said they thought they had some role in preventing opioid abuse, and 40% were unsure whether it was a problem in their communities. However, 73% agreed that “their training on opioid abuse in veterinary school was fair, poor, or absent.”

This is not surprising, as I found many years ago that there was little education on opioids provided to doctors of any kind during their schooling. In Cincinnati, Ohio, law enforcement agencies offered to provide an hour of training at medical schools on the topic of prescription drug abuse and were routinely told there just was not a single hour available for these future drug prescribers. The only way we edged our way into educating medical students was when a drug representatives invited us to do our thing while they fed the students and discussed their products. This stood in contrast to pharmacy schools, where we were welcomed with open arms to provide education on prescription drug abuse.

During our enforcement efforts, we certainly encountered diversion in the veterinary world among pet owners, veterinary staff members, and sometimes the vets themselves. Some of these situations would have been comical if they had not involved addiction.

One example is a pet owner who would bring his small dog into the vet’s office, claim that the little guy had anxiety, and request benzodiazepine to calm his behavior. I am an avid dog lover, and I think many small dogs have anxiety as part of their makeup. This dog, however, seemed to need diazepam from 5 vets each month. The owner was doctor shopping, but not for Fido. Another pet owner trained his dog to cough so he could get a prescription for codeine cough syrup.

In another case, a pet owner was used as a pawn by a veterinarian, who was addicted to pain medication, and her assistant, who aided and abetted the vet. This duo found that many of the dogs presented to them needed to spend at least 1 night at the clinic and required prescription opioids. Their modus operandi included writing a prescription for the canine and giving it to the owners, who would fill it at a local pharmacy. Once the owners received the drugs from the pharmacist, they were instructed by the vet to bring them to the clinic so they could be administered overnight. This scam went on for some time until a suspicious pharmacist learned from an owner that the drugs were being returned to the vet’s office for administration. This prompted a call to our office, and we were able to discover a specific pattern of many dogs being kept for 1 to 2 nights and all had been prescribed pain medication. A search warrant served at the vet’s office revealed even more evidence, and the duo was arrested.

In yet another case in an impoverished area of town, a local drug dealer began intimidating the vet who had set up a practice in the neighborhood. The dealer would bring in names of pets and their supposed owners and instruct the vet to write prescriptions, mostly for morphine that was subsequently sold on the streets near the office. The vet received a stipend for each prescription he wrote, but he may have been more afraid of the dealer than interested in making extra money. This case took a very sad turn when the vet committed suicide after his arrest.

These cases are not the norm and have been far exceeded by prescription drug-related criminality occurring in the practices of medical doctors. That said, I think any health professional who administers, dispenses, or prescribes controlled substances should receive meaningful education on the topic.

Cmdr John Burke is a 40-year veteran of law enforcement, the past president of the National Association of Drug Diversion Investigators, and the president and cofounder of the International Health Facility Diversion Association. 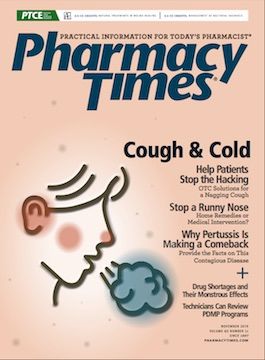 A Pharmacist's Guide to a Once-Daily Treatment for Chronic Hepatitis B Infection
Can You Read These Rxs? (November 2019)
Walmart Essay Winner: A Community Pharmacist's Impact Can Go a Long Way
Letter to the Editor: Re: the Health & Wellness article “What Are the Options for Treating Pain?” in the September issue of Pharmacy Times®:
Descovy from Gilead Sciences Inc
November 2019 Generic Product News
OTC Focus Case Studies: Eye Problems
When Is a "Whoop" Not a Cheer?
Devices, Not Just Doctors, Should Engage Patients
Implementing Critical Pathways of Clinical Care at Moose Pharmacy
Veterinarians Need Rx Abuse Training
Case Studies (November 2019)
Eye Health Is Key in Diabetes Management
Urge Patients to Use Supplements With Caution
Is a Discharged Pharmacist Eligible for Unemployment Benefits?
Related Videos
Related Content