Working at the pharmacy drive-thru is a retail rite of passage. 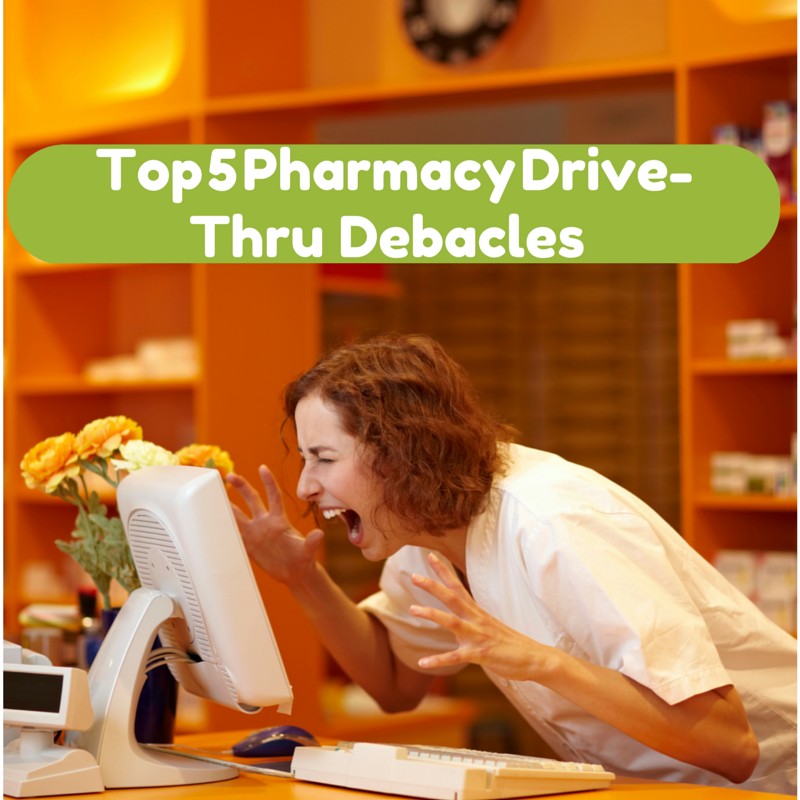 Working at the pharmacy drive-thru is a retail rite of passage.

There’s no question that it can be challenging, hectic, and sometimes, depending on how the winter weather is where you work, extremely chilly. It requires an extra measure of patience, for sure.

Over the years, my colleagues have shared many tales from the drive-thru. As homage to those who man the window day in and day out, I’ve complied the top 5 drive-thru clogging acts that frustrate even the most unflappable pharmacist:

Picture this: You are working the drive-thru window at a 1-lane retail pharmacy. The car in front of the window runs out of gas, rendering it immobile.

Naturally, this happens at the busiest time of day.

For as long as it takes for the car to vacate the lane, you have angry customers at the counter complaining that they had to park, get out of the car, and come into the store!

You are short a pharmacy worker because someone has to help the customer who ran out of gas and figure out how to warn other drivers that they should not get in line behind the stricken vehicle. You feel bad for the mother with the 3 sick kids and the elderly customer who had to make the trek, only to wait in the huge line that has now formed at the counter.

To make matters worse, the customers at the counter are all glaring at you as if you put the car there!

An oft-cited pet peeve about the pharmacy drive-thru is when a client walks up to the window. It’s worse if the person tries to be funny by ordering a Big Mac.

Many stores have policies stating that pharmacy staff may not serve a walk-up/bike-up customer at the drive-thru due to concerns about safety or armed robbery.

If the store happens to have such a policy, pharmacy staff must then figure out how to communicate that policy to the walk-up customer without opening the drive-thru window—which makes the customers in vehicles angry because it clogs up the line.

Drive-thru pharmacies were put on this Earth for customer convenience. However, drive-thru customers regularly seem to mistake pharmacy staff for personal shoppers.

If a customer wants an item from the pharmacy, that’s fine. But asking for lunchmeat (at the grocery store pharmacy), a Coke, and Band-Aids is just holding up the line.

If the pharmacy is short-staffed, it is often impossible for anyone to leave to fetch the items, anyway. Telling a customer that you cannot get their lunchmeat/Coke/Band-Aids, thereby forcing them to come into the store, can sometimes result in a complaint or call to you manager.

Filling prescriptions takes time. Often, customers leave the doctor’s office after receiving a prescription and proceed directly to the pharmacy.

In most cases, the prescription hasn’t even arrived yet—but the customer is there, at your window, refusing to move. Even after repeated pleas, the customer refuses to come back later or walk inside to wait.

Subsequent cars complain about the drive-thru being “so slow” and ask, “Why does putting pills in a bottle take so long?” Ugh.

Attempting to consult with a patient via a drive-thru speaker over the din of a running car is difficult, at best, for both parties. At worst, the patient’s safety could be compromised if he or she misses important information.

There seems to be a baffling resistance to walking into the store to resolve complicated issues, resulting in many complaints from other customers.

In closing, I’d like to salute all the drive-thru pharmacists out there. You have a tough job—and you really do see it all!