To D or Not to D: That Is the Question

Vitamin D encompasses a group of fatsoluble secosterols that are found in certain foods and supplements and can also be produced when synthesis of vitamin D is triggered after the sun’s ultraviolet rays touch skin.

Vitamin D encompasses a group of fatsoluble secosterols that are found in certain foods and supplements and can also be produced when synthesis of vitamin D is triggered after the sun’s ultraviolet rays touch skin. It is required for bone growth and remodeling,and when paired with calcium, it can help to prevent osteoporosis. Low levels of vitamin D have been linked with poorer health and with disease.1 Although the importance of vitamin D in regard to bone health has been established, its importance in other areas, such as skin pigmentation, pregnancy, cancer, and immune function, is unclear and not supported by clinical evidence.1,2 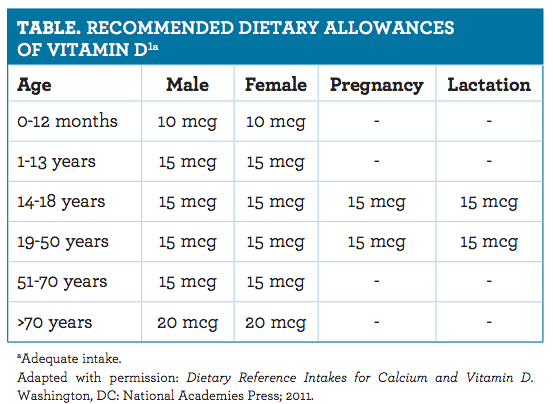 The American Academy of Pediatrics (AAP) recommends that infants who are breastfed receive vitamin D supplementation. Although most infant formulas contain vitamin D, the AAP still recommends that infants who are receiving less than 1 L of formula per day also receive supplementation, in addition to those who are exclusively breastfed.3 The results of a 2010 study of data from the Infant Feeding Practices Study II, in which mothers of both breastfed and formula-fed infants responded to mailed questionnaires on a variety of topics, including dietary intake, found that 44% to 58% of infants met the 2003 recommended amount of 5 mcg per day of vitamin D. When the AAP recommendation increased to 10 mcg per day in 2008, less than a quarter of infants would have met the recommendation.4 Mothers who responded to the question gave a variety of reasons for not supplementing their infants with vitamin D, including lack of knowledge about supplementation, misinformation about vitamins in formula and breast milk, inconvenience of administering supplements, and infant’s dislike of them. Common phrases repeated by the mothers were, “I didn’t know I should,” “Baby formula has all that is needed and recommended,” and “It causes [the baby] to spit up.”5

Of the mothers who responded to the questionnaire who were breastfeeding, most (88.4%) preferred to take a vitamin D supplement themselves rather than directly administer it to their infant. The benefits of maternal supplementation with vitamin D include ease of administration, both mother and infant receiving vitamin D, and decreased risk of infant toxicity due to dosing errors. Maternal supplementation at 100 mcg to 162.5 mcg per day, or a single monthly dose of 3750 mcg, can sufficiently enrich breast milk with enough vitamin D to meet an infant’s needs without causing toxicity. If mothers choose to give their infants vitamin D supplementation directly, the infant should receive 10 mcg per day through drops administered by mouth or in the bottle.5

The results of a study conducted between 2011 and 2014 found that vitamin D supplementation use has increased in the United States, with 26% of older adults (≥60 years) taking a vitamin D supplement.6 As people grow older, their skin becomes thinner and they cannot absorb and process vitamin D as efficiently.1 Further, renal decline can occur in older adults. This affects vitamin D levels because the kidneys are needed to convert vitamin D in the body.1

Increasing vitamin D levels is also a modifiable risk factor to potentially reduce falls and fractures in older adults if taken daily. Sanders and colleagues sought to determine whether a high annual dose of vitamin D, instead of daily doses, would reduce the risk of falls and fractures. They conducted a study in 2010 on community-dwelling women 70 years and older and found that annual administration of 12,500 mcg of vitamin D increased the risk of falls and fractures, with the highest risk being within the first 3 months after administration.8 Based on these findings, daily dosing for older adults is preferred. It is recommended that adults younger than 70 years receive 15 mcg of vitamin D per day, and those 70 years and older receive 20 mcg per day.2

Individuals Who Have Undergone Bariatric Surgery

Obesity, which is prevalent in the United States, poses many health risks, and an increasing number of adults are undergoing weight loss (bariatric) surgery.9 Although bariatric surgery decreases the risk of disease and other complications related to obesity, it also decreases the body’s ability to absorb vitamins and other nutrients.10 According to the American Society for Metabolic and Bariatric Surgery, vitamin D deficiency occurs in up to 100% of patients who have undergone surgery for weight loss. To this end, they recommend vitamin D3 supplementation for these patients at daily doses of 75 mcg.11

Vitamin D deficiency also has been linked with hypertension, kidney disease, and diabetes.12 Beta cells in the pancreas, where insulin is secreted, have vitamin D receptors, and it is speculated that vitamin D may improve insulin sensitivity and secretion, as well as glomerular filtration rate.13 Study results related to this effect have been inconclusive, however, and research on the effect of vitamin D supplementation in patients with diabetes continues.14 Regardless, supplementing with 15 mcg of vitamin D per day in people younger than 70 years, and 20 mcg per day in those 70 years and older, to ensure that each patient meets the recommended daily value, has many health benefits and may later prove to be beneficial in patients with type 1 and type 2 diabetes.2

WHAT PHARMACISTS AND THEIR PATIENTS NEED TO KNOW

Although in some instances quantities that are higher than the recommended dietary allowance are indicated, overaggressive supplementation of vitamin D, or any nutrient, may result in adverse reactions.1 Inform patients that evidence supports the benefit of vitamin D to bone health but that its use is unclear in areas previously discussed, such as skin pigmentation, pregnancy, cancer, and immune function. For the average, healthy adult patient, the recommended dietary allowance of 15 mcg per day—and 20 mcg per day for those aged over 70 years&mdash;is appropriate. 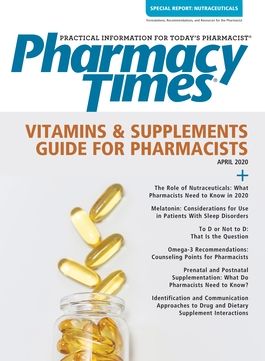