A growing number of Americans are feeling the long-term effects of spine curvatures.

A growing number of Americans are feeling the long-term effects of spine curvatures.

Shakespeare described England’s king as a “hunchbacked toad” in his 1592 historical play, Richard III.1 Richard reigned from 1483 until he died in battle in 1485. His men buried him in an unidentified grave. Richard’s adversaries mocked his alleged deformity, and it became a legacy of sorts. Historians wondered if the deformity rumors were true; few paintings of Richard III existed or survived. In 2012, archeologists made history when they excavated a parking lot and exhumed him.2 The exhumation allowed skeletal analysis, confirming that Richard III had scoliosis, but not to the extent that it would have been classified as kyphosis (the medical term for hunchback). 3 Richard III’s enemies tarnished history with lies. What is scoliosis, and what are its repercussions? 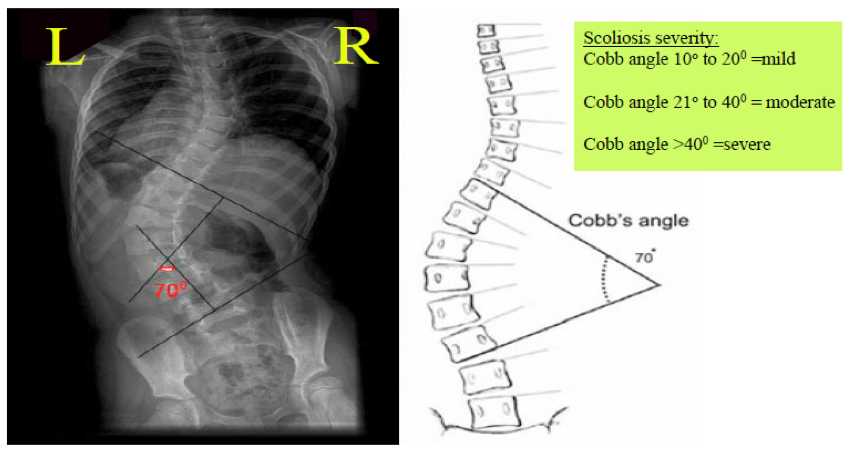 We tend to think of the spine as straight, but each spine deviates somewhat. Deviations measured as Cobb angles exceeding 10o—3-dimensional lateral curvatures with axial rotation, usually convex to the right (Online Figure)&mdash; are usually noticed in childhood, resulting in a diagnosis of scoliosis. Most scoliosis is idiopathic and is classified by the severity of the curvature and the age at diagnosis (ie, infantile scoliosis affects toddlers younger than 3 years, juvenile scoliosis affects children 4 to 10 years of age, and adolescent scoliosis affects youths 11 to 18 years of age).4 Up to 4% of adolescents have idiopathic scoliosis (IS). Girls develop scoliosis 10 times more often than boys, and the curvature tends to worsen during growth spurts.5

Approximately 6% of adults older than 50 years have scoliosis, which may reflect degenerative scoliosis or progression of childhood IS. Curves in different spine regions progress differently. Curves of 40o to 50o at skeletal maturity generally progress 10o to 15o during a lifetime. Curves larger than 50o at skeletal maturity progress approximately 1o to 2o annually.6 IS has been associated with reduced bone mineral density and an increased likelihood of spinal arthritis, so a consequence may be an increased tendency toward osteoporosis.7 Additionally, standard dual-energy x-ray absorptiometry tests often overestimate bone density in patients with even slight (>5°) axial rotation.8 There is limited information about treatment options for adults with scoliosis.9

Scoliosis can also be congenital or neuromuscular, with the latter related to diseases such as cerebral palsy, muscular dystrophy, spina bifida, and polio.4,5

Historically, researchers have described IS as typically asymptomatic. Today, orthopedic researchers dispute that claim. Most patients receive a diagnosis after they (or their families) perceive a deformity, and about one-fourth of patients present with pain.10,11 Another symptom, psychological stress, is common and serious. Adolescent IS patients are more likely to have suicidal thoughts, strained peer interactions, and concern over body development.12

IS’s progression can be relentless, and at its most severe, it is deadly. Curvatures that approach 70o can compress and compromise the heart and the lungs. Affected patients have uneven hips or shoulders (one shoulder may be higher than the other), or have obvious deformities. Patients may report back pain or fatigue after sitting or standing for a long time. These manifestations may present late in life as IS or degenerative scoliosis progresses.6,9

Patients diagnosed with juvenile IS are at highest risk for complications and symptoms; curvature progresses in nearly 90% of these patients, and approximately 70% eventually need corrective surgery.13 An initial curvature of >25% or a convex curvature to the left is associated with a poorer prognosis.5 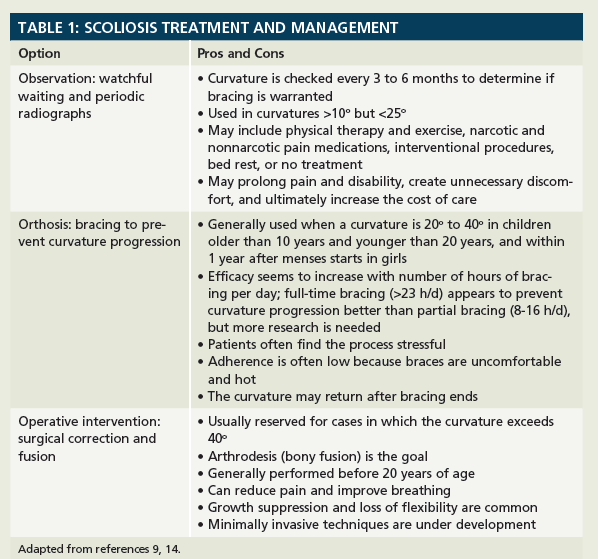 Collective knowledge about IS’s natural history is still lacking. Once IS is diagnosed, most orthopedic experts select the appropriate treatment from among “the 3 Os”: observation, orthosis, and operative intervention. Selecting the best treatment (Table 19,14) for specific patients is complicated, as skeletal maturity is a critical factor, the risk of progression varies considerably, and long-term consequences are difficult to predict.

Implications in the Pharmacy

Scoliosis may not be a primary reason that patients seek care in the pharmacy, but a growing number of Americans, especially older Americans, are feeling the long-term effects of spine curvatures. Table 25,10,15-18 lists points to remember when caring for patients with scoliosis.

Richard III’s exhumation brought muchneeded attention to scoliosis, its prevalence, and its treatments. Scoliosis can cause lifelong problems, including pain. As our population ages, pharmacists will see more patients, elders in particular, who have back pain from spine curvatures. Appropriate counseling can help these patients medicate appropriately.

Ms. Terrie is a clinical pharmacist and medical writer based in Haymarket, Virginia.