Back to School Immunizations: Protecting the Pediatric Patient Population

Vaccinations need to be up-to-date as children head back to school. Pharmacists should be current on the benefits of immunizations as was as the requirements in their region.

Vaccinations need to be up-to-date as children head back to school. Pharmacists should be current on the benefits of immunizations as was as the requirements in their region. 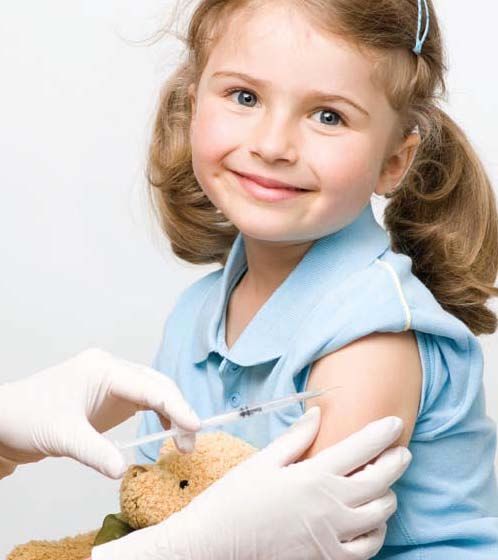 August is designated as National Immunization Awareness Month and serves as an excellent reminder for parents to ensure that vaccinations are up to date, particularly as children head back to school. While certain vaccinations are mandatory for children to attend school, preschool, day care, or child care facilities, the overall benefits of these immunizations for all individuals should never be underestimated.

Vaccines are considered to be one of the most cost-effective preventive measures against certain diseases. The Centers for Disease Control and Prevention (CDC) declared vaccinations to be one of the top 10 public health achievements of the 20th century, as they have saved millions of lives since their introduction more than 200 years ago.1-3 Through the years, the use of vaccines has eradicated smallpox, eliminated wild poliovirus in the United States, and significantly reduced the number of cases of measles, diphtheria, rubella, pertussis, and other diseases that often caused serious illness or even death.4

Schools have played a key role in the control of vaccine-preventable diseases in the United States, because state-based school entry vaccination laws have contributed to achieving high rates of immunization among the pediatric patient population.1,5 Immunization laws for entry to school date back to the 1850s in Massachusetts and were first established to control outbreaks of smallpox in schools.1 By the beginning of the 20th century, nearly half of the states had established requirements for certain vaccinations for entry to school in order to prevent epidemics of vaccine-preventable contagious diseases, such as measles and pertussis.1

Currently, all 50 states and the District of Columbia require documentation of certain vaccinations for entry to school, although the requirements may differ from state to state.6,7 Many states also have laws requiring certain vaccinations for college admission. Some states specify which vaccines and how many doses are required in the law itself, while other states authorize the state health officer or health board to determine the nature of required vaccinations.1,8

Since 1989, vaccination requirements have been expanded for schools and day care settings.6 As of the 1998-1999 school year, all states required vaccination against diphtheria, measles, and polio.6 In addition, all states and the District of Columbia now require vaccination for children in licensed day care facilities.6 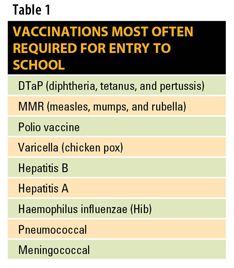 Since 2005, the Advisory Committee on Immunization Practices (ACIP) has recommended routine immunization with a quadrivalent meningococcal conjugate vaccine for all adolescents aged 11 to 18 years, as well as for older high-risk groups, such as college freshmen living in dormitories; however, all schools may not mandate receiving this vaccine.9

As of June 2009, 18 states had school mandates for the meningococcal vaccine for elementary and secondary schools.10 Currently, no states have mandates for the rotavirus vaccines.7 The ACIP recommendations are often considered by states as they determine which vaccinations will be required for entry to school.1 Vaccine requirements for entry to school vary from state to state, but in general, most schools require the vaccines found in Table 1.

An estimated 75% of states have reached the Healthy People 2010 objective of at least 95% vaccine coverage for all of the vaccines recommended by ACIP for children in kindergarten and first grade.11 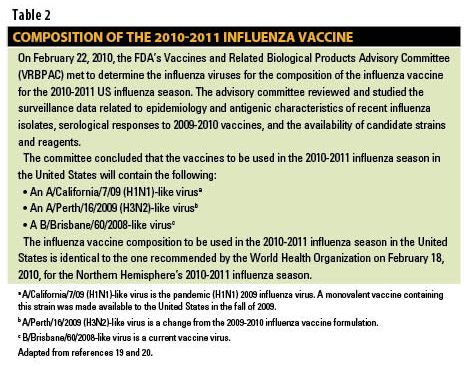 Menveo is a vaccine indicated for active immunization to prevent invasive meningococcal disease caused by Neisseria meningitidis serogroups A, C, Y, and W-135. Menveo is approved for use in individuals 11 to 55 years of age.14 It is administered as a single 0.5-mL dose via intramuscular injection after reconstitution.14 The most common adverse effects associated with this vaccine include pain at the injection site, headache, myalgia, malaise, and nausea.14

Prevnar 13 is indicated for active immunization for the prevention of invasive disease caused by Streptococcus pneumoniae serotypes 1, 3, 4, 5, 6A, 6B, 7F, 9V, 14, 18C, 19A, 19F, and 23F. In addition, Prevnar 13 is indicated for the prevention of otitis media caused by S. pneumoniae serotypes 4, 6B, 9V, 14, 18C, 19F, and 23F.15 It is approved for use in children aged 6 weeks through 5 years, and the 4-dose immunization series consists of a 0.5-mL dose via intramuscular injection administered at 2, 4, 6, and 12 to 15 months of age.15 The most common adverse effects include redness, swelling and tenderness at the injection site, fever, decreased appetite, irritability, increased sleep, and decreased sleep.15

In October 2009, the FDA approved Cervarix (human papillomavirus [HPV] bivalent [types 16 and 18] vaccine, recombinant) manufactured by Glaxo- SmithKline.16,17 Cervarix is indicated for the prevention of cervical cancer and cervical intraepithelial neoplasia caused by HPV types 16 and 18.16,17 It is approved for females aged 10 to 25 years and is administered intramuscularly. The most common adverse effects associated with this vaccine include pain and redness at the injection site 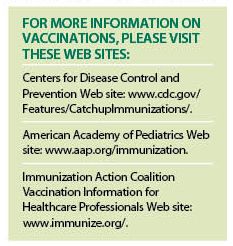 as well as fatigue, headache, myalgia, gastrointestinal symptoms, and arthralgia.19,20 In October 2009, the FDA also approved a new indication for Gardasil (Merck) for the prevention of genital warts (condyloma acuminata) due to HPV types 6 and 11 in boys and men aged 9 through 26 years.18

Due to the 2009 outbreak of the H1N1 influenza virus, the CDC urged many individuals, especially school-aged children, to receive the H1N1 vaccine. The composition of 2010-2011 H1N1 vaccine can be found in Table 2.19,20

School vaccination requirements are critical in both eliminating and reducing vaccine- preventable diseases in the United States, thus protecting our children and keeping them healthy. Parents should be encouraged to review and discuss their children’s current immunization profile with their primary health care provider. By increasing awareness about the safety and efficacy of vaccines, parents can make informed decisions about their children’s health. A complete list of vaccination requirements for school entry by state can be found on the Immunization Coalition Web site at www.immunize.org/laws/.

Ms. Terrie is a clinical pharmacy writer based in Haymarket, Virginia