Pharmacists can help improve adherence by providing patient counseling and guidance about the importance of needle selection and appropriate injection technique.

This article was sponsored by BD

Medication nonadherence, which is prevalent among patients with type 2 diabetes mellitus (T2DM), is associated with increased rates of mortality and hospitalization.1 A recent survey (2008) which included 500 patients with diabetes identified that 33% of patients have some level of dread associated with daily insulin injections and 57% of patients intentionally skip insulin injections.2 Insulin administration is an essential component of diabetes management for many patients, and pharmacists may help positively impact medication adherence by providing patient counseling and guidance about the importance of needle selection and appropriate injection technique.

Insulin should be administered into the subcutaneous tissue without reaching the muscle layer. Intramuscular administration, which more often occurs when administering insulin in the thigh, should be avoided to prevent the risk of rapid insulin absorption, which may result in hypoglycemia.3 As illustrated in Figure 1, inadvertent injection of insulin into the muscle fascia is more likely to occur with longer (8-mm, 12.7-mm) needles.4 Thus, selection of a needle of appropriate length is clinically important. 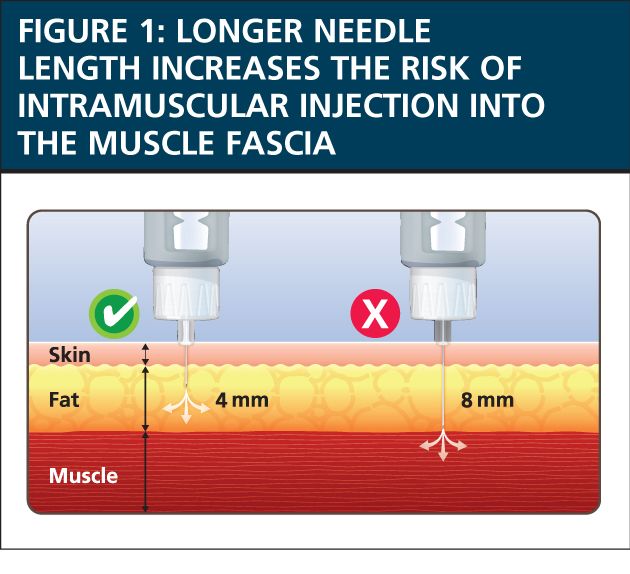 There is no medical reason to use needles longer than 6 mm for subcutaneous insulin injections.4 In a clinical study by Gibney and colleagues, which included obese patients with diabetes, it was estimated that over 99.5% of injections with 4-mm needles would result in successful subcutaneous injection when proper injection technique was followed.5 As shown in Figure 1, the 4-mm needle length is the optimal length to achieve a subcutaneous injection yet short enough to avoid an intramuscular injection. Because of safety and tolerability advantages over longer needles, shorter needles (ie, 4 mm, 5 mm, and 6 mm) are now recommended for use in children or adults, regardless of body mass index (BMI).4

Although current recommendations support shorter needle length, an increased awareness of the advantages of using shorter needles (6 mm or less) is needed. In a recent international survey (2009) of more than 4000 patients with type 1 or 2 diabetes mellitus (Insulin Injection Technique Questionnaire), more than half of adults (56%) who administer insulin were using an 8-mm or longer needle. In this same survey, 63% of patients had been using the same needle length since the time of their initial diagnosis.6 This suggests that a unique opportunity exists for pharmacists to evaluate patient knowledge and discuss the importance of needle selection for all patients who are administering insulin. In general, 4-mm needles can be used in almost all individuals, including children/adolescents and obese patients.7

Injection sites for insulin include the upper arm, antero-lateral upper thigh, abdomen, and buttocks.5 Needles should be inserted at a straight-in, 90° angle to the skin surface. 4-mm and 5-mm needle lengths allow for a single-handed, no-pinch technique, which gives more patients the option to inject in their upper arm or buttocks. A skin pinch is recommended for needles 6 mm or longer.3,4,7 Patients should also be educated on the importance of rotating injection sites. Practical tips from the American Association of Diabetes Educators for minimizing pain during injection are shown in the Table (see below).

Patients who inject insulin are concerned with comfort and ease of use. Also, patients with T2DM tend to have significantly lower hand strength versus control subjects without T2DM, regardless of age, as observed in a study by Cetinus et al.8 As discussed, selection of shorter needles is clinically important to help ensure proper injection of insulin into the subcutaneous layer. The BD Ultra-Fine™ Nano™ 4-mm × 32G Pen Needle is the shortest and thinnest pen needle available from BD, and it is compatible with all diabetes pens.* It is covered at the preferred copay by virtually all managed health plans, including Medicare Part D, although copays vary by plan.

Although the use of pen needles is growing, approximately 40% of all patients in the United States still inject with insulin syringes.13 BD Insulin Syringes with the BD Ultra-Fine™ 6-mm × 31G needle meet the needs of patients who use insulin syringes. It is the shortest needle available on an insulin syringe and its efficacy is equivalent to longer needles while being 53% shorter than the 12.7-mm needle (Figure 2).14

Pharmacists can help positively impact medication adherence in patients who inject medications for the management of their diabetes. It is important for pharmacists to be aware of available products as well as best practices for injection. Interestingly, most patients have been using the same needle length since diagnosis,6 selected before current products became available. When these patients were asked to try using an insulin syringe with a 6-mm needle, over 80% of patients said they would prefer to use BD Insulin Syringes with the BD Ultra-Fine™ 6-mm needle over their current product.15 Shorter needles are less painful, easier to use, and preferred by most patients,11 and they are now recommended for use in children or adults on insulin therapy, regardless of BMI.4

Pharmacists can help by letting patients know about the available options. Several features distinguish the BD Nano™ 4-mm Pen Needle from other pen needles, including PentaPoint™ Comfort and EasyFlow™ Technology; these technologies help ensure ease of use, which may improve adherence to insulin therapy. Greater treatment adherence leads to more frequent patient visits to the pharmacy, allowing additional opportunities for pharmacists to provide patient counseling and guidance. To learn more about this subject, visit http://bd.com/us/diabetes/.