Nearly 30% of first-time prescriptions never make it to the pharmacy, according to a recent study published in the Journal of General Internal Medicine. According to the study’s authors, previous research focused on adherence after prescriptions had been filled, but no large studies to date have observed how often and why patients fail to fill prescriptions in the first place.

Adherence was higher for prescriptions written by pediatricians, and patients aged 18 and younger were most likely to fill prescriptions, with a primary adherence rate of 87%. Primary nonadherence was most common among patients with chronic illnesses, such as hypertension (28.4%), high cholesterol (28.2%), and diabetes (31.4%).

The survey may lead public health initiatives in a new direction, said Michael A. Fischer, MD, the study’s lead author. Interventions that focus on specific medication classes, such as those used to treat common chronic conditions, could dramatically improve overall rates of primary adherence, the study stated. Such initiatives are already in place in several retail pharmacy chains, which offer special discount programs and counseling services to patients with certain conditions. These and other pharmacy-based solutions could provide a model for researchers to design interventions that address the crucial gap between receiving a prescription from a physician and having it filled.

In this podcast from the CDC, host Matthew Reynolds and epidemiologist Clark H. Denney, PhD, discuss what preventive actions the 1 in 3 Americans who have high blood pressures are taking (or not taking) to reduce their risk of heart disease and stroke. 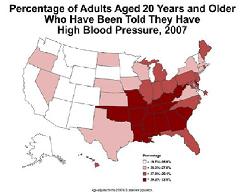 A 2007 study by the Centers for Disease Control and Prevention (CDC) found distinct regional trends in the prevalence of hypertension among adults aged 20 and older.

Pharmacists who practice in areas of the country where high blood pressure is most common can play a greater role in educating patients about this severe chronic condition.

Patients with high blood pressure benefit from increased intervention from pharmacists, new research suggests. Researchers monitored the progress of 104 patients diagnosed with hypertension and found that patients who received care from both pharmacists and physicians showed marked improvements in blood pressure control over time. The findings were published in the journal Pharmacotherapy.

The trial was designed to examine the benefits of “team care,” in which interdisciplinary groups of health care providers—including nurses, physicians, and pharmacists&mdash;work together to improve patient outcomes. As part of the study, nurses measured participants’ blood pressure at baseline and after 9 months of treatment. Researchers collected data from the same patients’ medical records 18 months after the study ended, and then again after 27 months to assess long-term results.

At the end of the treatment period, 78.5% of patients in the physician—pharmacist intervention group achieved blood pressure control, compared with only 48.7% in the control group.

The results were similar at 18 and 27 months, though blood pressure did deteriorate at a similar rate in both groups following the initial treatment period. Overall, the percentage of patients who maintained blood pressure control remained comparatively high in the intervention group long after the trial ended.

The findings, researchers concluded, suggest that treatment plans for high blood pressure should include long-term involvement of pharmacists to achieve better clinical outcomes. 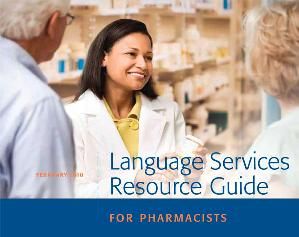 iations, “Language Services Resource Guide for Pharmacists” provides a wealth of resources for pharmacists, from basic multilingual tools to specific guidelines for building a language services program from the ground up.

“Take two kiss a day, by the little.” Written on a prescription slip, these words would prompt most pharmacists to call the physician’s office for clarification.

Yet many such labels—translated from English to Spanish by computer programs&mdash;find their way into the hands of Spanish-speaking patients and could cause serious confusion, according to a study published in the journal Pediatrics. Researchers rated the quality of prescription labels translated by 13 of the most commonly used translation programs as “inconsistent and potentially hazardous.”

Among the 76 labels studied, Iman Sharif, MD, MPH, the study’s lead author, and her colleagues reported an overall error rate of 50%. In pharmacies without a bilingual pharmacist on staff, those errors are difficult to catch.

The most common problem was mixing Spanish and English, which occurred in 43% of Spanish labels and often yielded instructions that were inaccurate or misleading. The programs failed to translate certain common words, such as “once,” which means “eleven” in Spanish. Without further clarification from a pharmacist, this simple mistake could lead to an overdose.

Examples of poorly translated labels included such baffling directives as “Apply to affected area twice to the indicated day like” and “Take 1.2 aldia give dropperfuls with juice eleven to day.”

Dr. Sharif said the mistranslations expose a missing link in the nation’s health care system, which has long struggled to explain and rectify disparities in care for non-English speakers. The study’s results may not even capture the full extent of the problem, which likely affects prescriptions translated into other languages as well, the authors noted.

To combat the problem, the researchers called for more funding and regulations that support the development of software capable of producing intelligent, nuanced translations of medical information. Until then, Dr. Sharif believes software is no replacement for consultation with a live pharmacist—even one who does not speak Spanish. If a translator or bilingual pharmacist is not available, Spanish-speaking patients and pharmacists should work together to ensure clarity. Dr. Sharif recommends patients “repeat instructions back to the pharmacist, to catch any miscommunications."