Pharmacists Are Happy With Their Salaries, Less So With Their Jobs, Survey Shows (Part 2)

Although many pharmacists are divided when it comes to their job satisfaction, most of them are currently happy with their compensation, according to a recent Pharmacy Times® Salary and Job Satisfaction Survey.

Although many pharmacists are divided when it comes to their job satisfaction, most of them are happy with their compensation, according to a recent Pharmacy Times® Salary and Job Satisfaction Survey.

The first article in this 3-part series provided a general overview of the survey and its respondents. In this article, we will explore the questions and answers concerning compensation.

When asked on a scale of 1 to 7 (with 1 being "not at all" and 7 being "extremely") how satisfied they are with their current annual total compensation, about 62% of 290 pharmacists gave a favorable answer of 5, 6, or 7. Comparatively, about 24% of respondents gave a more lukewarm answer of 3 or 4, while about 14% rated their salary satisfaction as 1 or 2. For a breakdown of how pharmacists responded to this question, please see the Table. 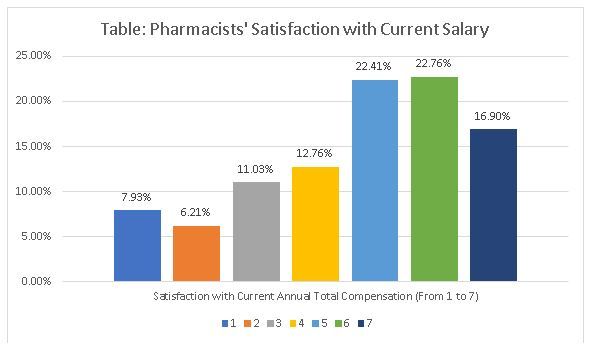 Many respondents also seemed to suggest that they had grown slightly more satisfied with their salary since graduating from pharmacy school. When asked to rate (from 1 to 7) how satisfied they were with their annual total compensation during their first year after pharmacy school, about 60% of 290 respondents gave a favorable score of 5, 6, or 7, while about 28% gave a score of 3 or 4 and 12% gave a score of 1 or 2.

Notably, the survey results showed a shift from community pharmacy practice to health systems and other nontraditional settings during the course of some pharmacists’ careers. When asked about the practice setting in which they primarily worked during their first year after graduating from pharmacy school, 64% of respondents answered that they worked in a community pharmacy, 26% said that they worked in a health-system pharmacy, and 9% described their primary setting as “other.” However, 52% of pharmacists indicated that their current primary setting is a community pharmacy, while 31% of pharmacists said that they currently work in a health system, and 16% described their current primary practice setting as “other.”

Although the majority of survey respondents were generally satisfied with their salaries, some were more critical. Katherine Cheng, PharmD, a New York state community pharmacist with 17 years of experience in the profession, rated her satisfaction with her annual total compensation as a “3.” Specifically, she voiced concern about the fact that the evolving roles and responsibilities of pharmacists are quickly outgrowing both salary levels and regulations meant to protect pharmacists and the patients they serve.

“Although we are paid a decent salary, I do not feel we are fairly compensated as long as laws governing our well-being are lacking. For example, many retail pharmacists continue to work 8-hour or more shifts and are not provided a break,” Cheng said in an interview.

“The workload, especially with emerging roles of a pharmacist, make it unrealistic for us to take a few minutes for ourselves,” she said. “While I am an advocate for the expansion of the pharmacist's role in health care, I am against the high workload demanded of us without sufficient support staff which has been shown to lead to higher rates of medication incidents.”

Cheng also said that current salary levels are not adequately keeping pace with inflation and tuition rates, placing an excessive burden on the growing number of recent pharmacy school graduates.

“It's sad to see that starting salary for a new pharmacist is equal to or perhaps even lower than what it was 18 years ago, when factoring in rise in cost of living and inflation,” she said. “Pharmacy students are spending more time in obtaining their degree but aren't being compensated for the additional education, due to too much competition from the overabundance of graduates.”

However, Cheng ultimately emphasized that salary was not as important to her as other factors.

Next month, in part 3 of Pharmacists are Happy With Their Salaries, Less So With Their Jobs, Survey Shows, we will explore how survey respondents view their job satisfaction.