Renal cell carcinoma is considered the most prevalent form of kidney cancer, and accounts for an estimated 9 of every 10 cases of renal cancer.

Renal cell carcinoma (RCC), also referred to as renal cell cancer or renal cell adenocarcinoma, is considered to be the most prevalent form of kidney cancer, ranking third among the most common genitourinary cancers in the United States and accounting for an estimated 9 of every 10 cases of renal cancer.1,2 RCC represents an estimated 3% of malignancies among adults3,4; it is the eighth most commonly diagnosed malignancy and the tenth leading cause of cancer deaths among men in the United States.3,4 According to the National Cancer Institute (NCI), an estimated 57,760 Americans received a diagnosis of cancer of the kidney or renal pelvis in 2009, with 12,980 deaths.2 The incidence of RCC increases between the ages of 25 and 79 years, with peak incidences occurring between 40 and 70 years, and it occurs more commonly in men. The estimated 5-year survival rate associated with RCC is 67%.2 For those with localized disease, the estimated 5-year survival rate is 89.6%; for regional disease, 60.8%; and for metastatic disease, 9.5%.3,4 RCC is characterized by a lack of early warning signs, diverse clinical manifestations, and resistance to radiation and chemotherapy.3,5,6

In the 1980s, approximately 80% of patients had advanced kidney cancer at the time of diagnosis.7 With recent advances in detection methods and a better understanding of RCC, that figure has dropped to approximately 40%. Although RCC typically grows as a single tumor within a kidney, there may be 2 or more tumors in 1 kidney or even tumors in both kidneys.1,7 These tumors are often found incidentally on computed tomography scans or by ultrasounds performed for health concerns other than kidney cancer.1 According to the NCI, certain risk factors may be associated with an increased risk of RCC (Sidebar).2,7 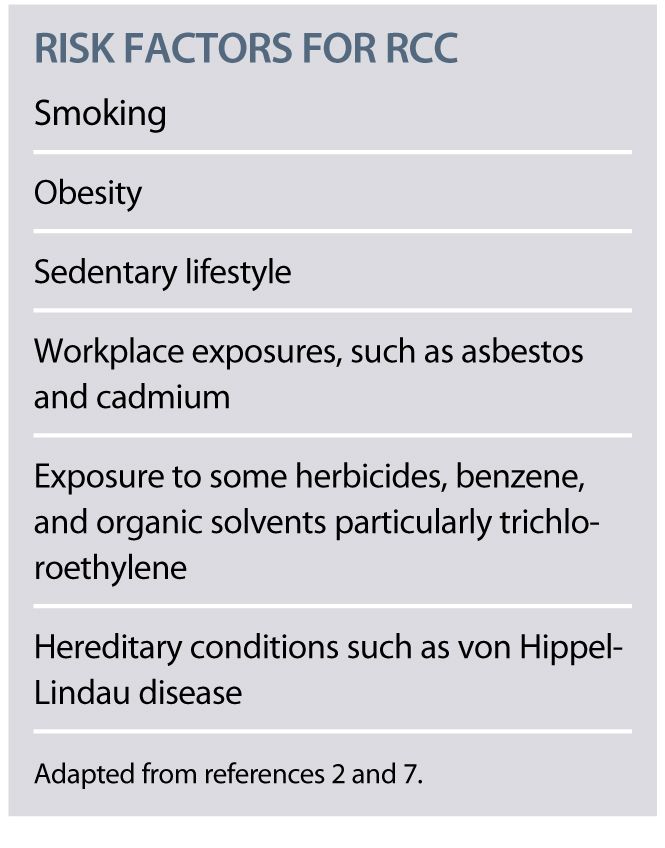 In its early stages, RCC typically causes no noticeable symptoms.10,11 When symptoms are present, the most common are gross hematuria, flank pain, and the presence of a flank mass.10,11 In a study in the Journal of Urology, approximately 53% of people with localized RCC had no symptoms.11 RCC metastases easily, most often to the lungs, bones, liver, and distant lymph nodes.1

The prognosis and treatment of RCC depends on the stage of the cancer, the patient’s age, other medical conditions, and overall health.13,14Treatment options include surgery, radiation therapy, chemotherapy, hormonal therapy, immunotherapy, or a combination of these approaches.1,3 Comprehensive management of RCC may also include palliative care.2 Typically, surgery is the mainstay for treatment of RCC stages I to III and can include a complete or partial nephrectomy of the affected kidney or removal of the tumor only.2,3,15,16 When surgery is not possible, arterial embolization may be used to shrink the tumor.17

RCC appears to be resistant to both radiation therapy and chemotherapy.18 Although 5-fluorouracil has been considered to be the most effective chemotherapeutic agent currently available for kidney cancer, response rates are only in the range of 5% to 8%.18 Systemic therapy for advanced renal cancer may include both biologic response modifiers, also known as immunotherapy, and targeted therapies that inhibit pathways known to be involved in its pathogenesis.2,3 Standard therapy for treating RCC used to include the cytokines interferon alfa and aldesleukin; however, the emergence of new drugs has given patients other treatment options.2,10,19,20 Studies report that both cytokines cause tumors to shrink to less than half their original size in about 10% to 20% of patients.19,20 Interleukin-2 (IL-2) is the only therapy that appears to result in long-lasting responses, although only a small percentage of patients respond in this manner.19,20 Immunotherapy with interferon alfa and IL-2 is useful for the treatment of metastatic disease, but it does not improve survival in the adjuvant setting after nephrectomy.20 In October 2009, the National Comprehensive Cancer Network Clinical Practice Guidelines in Oncology: Kidney Cancer was released. The guidelines, updated in 2010, contain an algorithm that follows a step-by-step clinical decision-making process. The most recent version can be found at http://img.medscape.com/pi/editorial/articlecme/2009/712614/Kidney%20V.2.2010%20%28Medscape%29.pdf. 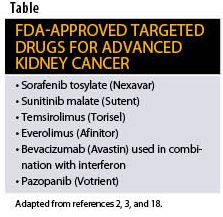 Since 2005, several new treatment options have been approved by the FDA for use in treating advanced RCC (Table).2,3,18 These agents inhibit pathways relevant to the pathogenesis of RCC and impede tumor angiogenesis, cell progression, and metastasis.2,10,21 Not only have these drugs increased the number of available therapeutic options, they appear to prolong survival for patients with advanced RCC.2,21 While these agents may shrink or slow the progression of the cancer, it is not yet clear if any can be curative.21

Recent clinical trials have established the role of targeted therapy as the first line of defense in patients with metastatic RCC.2,3,10 Three agents that target angiogenesis (sunitinib, bevacizumab, and pazopanib) and 1 agent that is a mammalian target of rapamycin (mTOR; temsirolimus) have been approved as first-line therapies, have lower toxicity profiles, and positive effect patient response.10

Four of the 6 targeted therapies approved for RCC (sorafenib, sunitinib, everolimus, and pazopanib) are administered orally, whereas temsirolimus is administered once a week via intravenous (IV) infusion. Bevacizumab is administered every 2 weeks via IV infusion in combination with interferon alfa, which is given 3 times weekly via subcutaneous injection.2 As the optimal treatment plans continue to evolve, these agents have largely replaced cytokine immunotherapy in treatment-naive patients.2,3,10

In 2009, the FDA approved 3 agents for the treatment of RCC, including everolimus (Afinitor, Novartis Inc), which was approved in March 2009. Everolimus is classified as an inhibitor of mTOR, a serine-threonine kinase, downstream of the PI3K/AKT pathway and is specifically indicated for the treatment of advanced RCC after treatment failure with sunitinib or sorafenib.22,23 Everolimus is supplied as a 5-mg or 10-mg tablet for oral administration. The recommended initial dose is 10 mg, to be taken once daily at the same time every day, either with or without food. The tablets should be swallowed whole with a glass of water; they should not be chewed or crushed. Most common adverse effects include stomatitis, asthenia, fatigue, rash, nausea, and diarrhea.22,23

In July 2009, bevacizumab (Avastin, Genentech Inc) was approved for RCC. It is classified as a humanized antibody to vascular endothelial growth factor (VEGF), and is specifically indicated for the treatment of metastatic RCC in combination with interferon alfa.22,24 Bevacizumab is supplied as a solution for IV administration. The recommended initial dose for RCC is 10 mg/kg every 2 weeks in combination with interferon alfa. Adverse effects include epistaxis, headache, rhinitis, proteinuria, hypertension, and taste alteration.22,24

Pazopanib (Votrient, GlaxoSmith- Kline), a VEGF receptor specifically indicated for the treatment of patients with advanced RCC, was approved in October 2009. Pazopanib is supplied as a tablet with a recommended initial dose of 800 mg orally once daily without food (at least 1 hour before or 2 hours after a meal). The dose of pazopanib should not exceed 800 mg. Adverse effects include diarrhea, nausea, fatigue, vomiting, and hypertension. 22,25 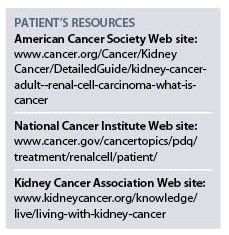 Patients with risk factors for developing RCC should be made aware of the signs and symptoms, and the need for early intervention for possible cure should be stressed. Patients with early-stage RCC who have undergone treatment should be educated about possible relapse, the importance of maintaining routine checkups, and treatment options.2 Statistics report that more than 50% of patients with early-stage RCC are cured, but the outcome for stage IV disease is poor.3,16 During counseling, patient education at both the start of therapy and continual monitoring throughout treatment is crucial. Patients should understand the possible adverse effects of the selected therapy and understand the need to contact their primary health care provider when warranted so optimal therapeutic effects are achieved.2 Patients should be encouraged to join support groups and discuss any concerns regarding treatment and prognosis with their primary health care provider.