Researchers have discovered how HIV infects healthy cells without being detected by the immune system.

HIV copies its RNA genome into DNA to infect cells with its virus; however, it was previously unknown how the virus acquires nucleotides, and how it remained undetected. The researchers discovered that HIV hides within the capsid while it builds DNA.

“We used to think that the capsid came apart as soon as the virus entered a cell but now realize that the capsid protects the virus from our innate immune system,” said senior author Dr Leo James. “The channels we've discovered explain how the fuel for replication gets into the capsid to allow the viral genome to be made.”

The team was able to discover this by detecting the atomic structure of the capsid in different states, and creating mutant versions of HIV viruses to see how it changed infection, according to a study published by Nature. Researchers were able to see iris-like pores in the capsid that can open and close similar to the human iris.

The pores were able to suck in nucleotides at great speed, and can keep out any other molecules, which explains why it is successful at evading the immune system. Researchers then designed an inhibitor molecule (hexacarboxybenzene) that can block the capsid pores.

Once the pores were blocked, the HIV virus became non-infectious, because it was not able to create copies of itself, according to the study. Although hexacarboxybenzene cannot cross the membrane of human cells, researchers believe that future drugs could be created that can enter the cells.

“We have already designed a prototype inhibitor that directly targets the channel,” said lead author David A Jacques, PhD. “We predict that this feature may be common to other viruses and will be an attractive target for new antiviral drugs, including new treatments for HIV and related viruses.” 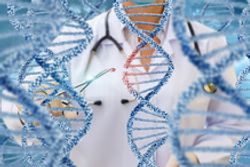