The law makes New Mexico the third state to enact a co-pay cap for insulin.

House Bill 292, introduced by Rep. Michaela Cadena (D-33rd) and Sen. Daniel Ivey-Soto (D-15th), passed the New Mexico House on a 61-2 vote and in the Senate 40-1. The legislation caps co-pay and out-of-pocket expenses for insulin at $25 per prescription for a 30-day supply.1

The CDC estimates that approximately 30 million people in the United States have diabetes, while another estimated 84 million are prediabetic and could require insulin later in life.

The act preceded a recently passed Virginia bill that forces insurers to cap insulin costs at $50 per month, joining Colorado and Illinois as the only states with insulin caps.2

According to CNN, insulin costs between $2.28 and $3.42 for drugmakers to manufacture, but patients with diabetes pay hundreds of dollars for the drug.3 The cost tripled between 2002 and 2013, and approximately 25% of insulin-dependent diabetics have at some point rationed their supply in response to the high cost, according to a 2016 study published in JAMA.4

Colorado was the first state to enact sweeping legislation on insulin prices in 2019, capping co-payments for insulin at $100 per month for insured patients, regardless of the supply they require. The law states, “[1] in [4] type 1 diabetics have reported insulin underuse due to the high cost of insulin…[t]herefore, it is important to enact policies to reduce the cost for Coloradans with diabetes to obtain life-saving and life-sustaining insulin.”6

This year has seen more interest in capping insulin costs, with Oscar Health becoming the latest insurer to cap some plan members’ out-of-pocket costs for insulin and other medications. In a statement, the New York-based insurer announced that its individual insurance plan members will now pay $3 for a 1-month supply of 100 commonly used drugs, including insulin.7

Additionally, CVS Health, owner of insurer Aetna, plans to eliminate out-of-pocket costs for all prescription diabetes medications for members whose pharmacy benefits are managed by the company starting in 2021.7

House Bill 292 requires the New Mexico Department of Insurance to issue a report that includes a summary of insulin pricing practices, as well as public policy recommendations to control and prevent overpricing of prescription insulin drugs made available to New Mexico consumers.1

“I am proud of House Bill 292, ensuring all New Mexicans can afford medicine they need to survive and thrive. Capping insulin copays brings much needed relief to families facing unconsciously high drug prices,” Cadena stated in a tweet for the New Mexico House Democrats.8 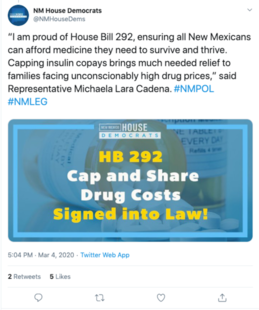 In a statement, Grishman said that the law will end an “unacceptable dilemma for thousands of New Mexicans with diabetes.”1

LaShawn McIver, MD, MPH, senior vice president of government affairs and advocacy for the American Diabetes Association, said that the legislation marks another step forward in the fight for more affordable insulin.9

“New Mexico is the third state to pass this type of legislation, proving that there is momentum to bring down insulin prices for those who need it. Legislators are hearing the cries of the approximately 7 million Americans who rely on insulin to live. We are grateful to Gov. Lujan Grisham, Sen. Ivey-Soto and Rep. Cadena for introducing and passing this critical legislation, and for your continued efforts to protect the more than 230,000 New Mexicans living with diabetes,” McIver said in the press release.9