Monoclonal Antibodies for Use in Multiple Myeloma

Multiple myeloma (MM) is a cancer caused by uncontrolled proliferation of plasma cells in the bone marrow.

Multiple myeloma (MM) is a cancer caused by uncontrolled proliferation of plasma cells in the bone marrow. Over the past decade, MM survival time has increased substantially due to the development of novel treatments, such as immunomodulatory drugs (IMiDs), proteasome inhibitors (PIs), and autologous stem-cell transplantation (ASCT). Although these advances have increased survival time, most patients die from refractory disease, propagating the need for effective treatments with longer remissions.

In November 2015, the FDA approved 2 monoclonal antibodies (mAbs) for the treatment of MM: daratumumab (Darzalex, Janssen) and elotuzumab (Empliciti, Bristol-Meyers Squibb). In April 2015, recruitment began for a phase 1 clinical trial evaluating the safety and efficacy of atezolizumab (Tecentriq), an anti-programmed death ligand-1 antibody, for use in MM.1-3

Therapeutic Use, Dosing, and Administration2-5

Daratumumab is FDA-approved in patients who have received at least 3 prior lines of chemotherapy or who are refractory to both a PI and an IMiD, whereas elotuzumab is indicated in patients who have received 1 to 3 prior chemotherapies. Both mAbs are dosed according to body weight and administered by intravenous infusion once weekly initially, with subsequent reduced frequency. For the first 8 weeks, daratumumab 16 mg/kg IV is administered weekly; after this time, dosage switches to every 2 weeks for the next 16 weeks and then every 4 weeks until disease progression.

In combination with lenalidomide and dexamethasone, elotuzumab 10 mg/kg IV is administered weekly for the first 2 cycles (28 days each), then every 2 weeks thereafter until disease progression. Due to the high risk for infusion reactions, patients should receive an IV corticosteroid, acetaminophen, and an oral antihistamine prior to therapy. If a reaction of grade 2 or greater occurs, the infusion should be interrupted and symptoms managed appropriately.

Daratumumab monotherapy in patients with treatment-refractory MM (SIRIUS) was an open-label, multicenter, phase 2 trial that evaluated the use of daratumumab 16 mg/kg in heavily pretreated patients with MM (n = 106). Patients 18 years or older were enrolled if they had received at least 3 prior lines of treatment with evidence of disease progression or had disease refractory to both a PI and an IMiD. Patients were excluded if they received anti-MM treatment within 2 weeks or ASCT within 12 weeks of day 1 of therapy. The primary endpoint was overall response rate (ORR [partial response (PR) + very good PR + complete response (CR) + stringent CR]). Progression-free survival (PFS) was included as a secondary endpoint. Notably, 87% of patients had received more than 3 previous lines of therapy (median = 5) and 95% were considered double refractory to a PI and an IMiD. An ORR of 29.2% was observed (95% CI, 20.8%-38.9%), and the median PFS was 3.7 months (95% CI, 2.8-4.6 months). No patients discontinued treatment due to drug-related adverse events (AEs).

Elotuzumab Therapy for Relapsed or Refreactory MM (ELOQUENT-2) is an open-label, multicenter, randomized phase 3 trial evaluating the efficacy of elotuzumab in patients with MM. The trial is ongoing and will continue until 427 deaths, the predetermined overall survival end point. It includes patients 18 years or older who have failed 1 to 3 prior treatments with documented disease progression (median = 2) and who are receiving lenalidomide and dexamethasone with elotuzumab (n = 321) or without elotuzumab (control group; n = 325). Co-primary endpoints include PFS and ORR (PR or better). At the time of interim analysis, 35% of the elotuzumab group and 20% of the control group were still receiving study treatment.

Clinical trials evaluating the safety and efficacy of these mAbs in combination with other anti-MM agents are ongoing.

Daratumumab and elotuzumab have not been found to induce or inhibit any transporters or enzymes, so drug interactions are not expected.

Monoclonal antibodies may be a viable option for patients with refractory MM. Unfortunately, these agents have not been directly compared in clinical trials. Daratumumab may be used as monotherapy, and elotuzumab may be used in combination with lenalidomide and dexamethasone. Although effective, mAbs are expensive: the average wholesale prices are $540.00 for daratumumab 100 mg/5 mL, $2160.00 for daratumumab 400 mg/20 mL, $2131.20 for elotuzumab 300 mg/vial, and $2841.60 for elotuzumab 400 mg/vial. Future studies evaluating the use of these agents in varying combinations with other anti-MM agents may expand their current place in therapy. 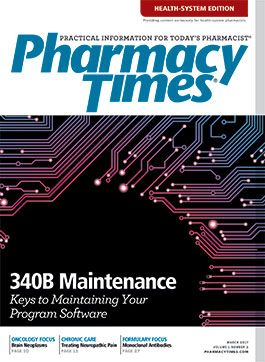 Treatment of Neuropathic Pain
The One that Broke the Camel's Back: DIR Fees Set to Catalyze Transparency Discussion With a Wider Audience
Brain Neoplasms and Malignancies
A Perfect Trifecta: The Pharmacist, Antimicrobial Stewardship, and Rapid Diagnostic Technologies
The Next Pandemic: Ready or Not?
Forgetfulness and Cognitive Issues in an Older Man
Monoclonal Antibodies for Use in Multiple Myeloma
340B Maintenance: Keys to Maintaining Your 340B Program Software to Ensure a Compliant Program
Related Videos
Related Content