Forgetfulness and Cognitive Issues in an Older Man

The physician diagnoses TE with mild Alzheimer’s dementia and wishes to initiate pharmacotherapy to improve his quality of life. She would prescribe an acetylcholinesterase inhibitor (AChEI), but is concerned about TE’s history of second-degree AV block type 2.

Alzheimer’s disease affects an estimated 5.4 million Americans, with nearly 5.2 million of that patient population being age 65 or older.1 It is the most common form of dementia and is typically characterized by progressive memory loss and declining cognitive functioning. There are no medical treatments that significantly alter progression of the disease, but several agents are available to improve cognitive functioning in its different stages.

AChEIs are considered first-line agents for mild to moderate Alzheimer’s disease due to a belief that patients with Alzheimer’s have an impaired acetylcholine synthesis process.2 These medications bind to acetylcholinesterase (AChE) and inactivate the enzyme, thereby increasing the amount of acetylcholine available at the synaptic cleft. This inhibition of AChE affects the acetylcholine not only in the central nervous system but also in peripheral tissue, such as the heart, where it can have an effect on cardiac conduction. Second-generation ChEIs, which include all of the currently available medications, act more selectively to inhibit AChE in the central nervous system and are associated with a lesser incidence of severe cardiovascular events. The most well-known first-generation ChEI is tacrine, which was discontinued in the United States due to concerns over hepatotoxicity.3 The TABLE reviews the various agents that the FDA has approved for Alzheimer’s disease. 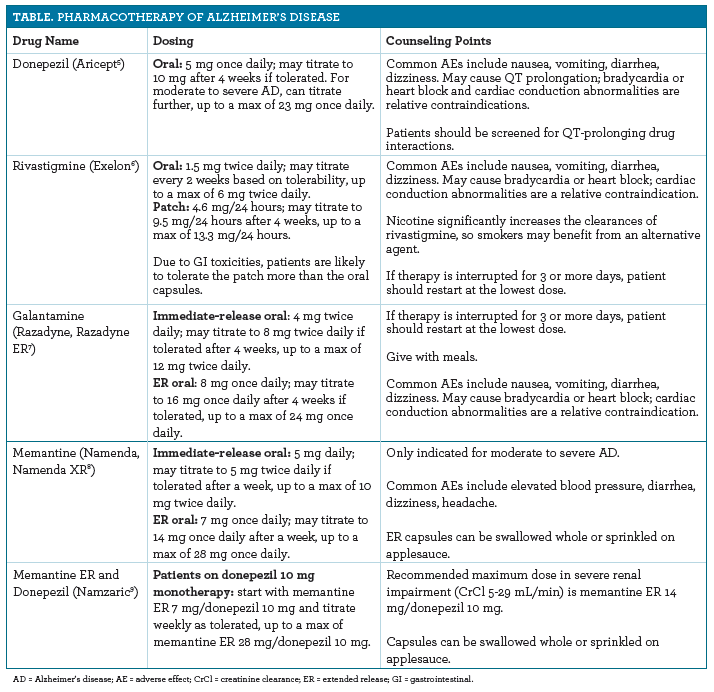 The role of cardiac monitoring in the management of patients on ChEIs was discussed in detail in an article in Advances in Psychiatric Treatment.4 The authors determined that although syncope occurs with relatively common frequency among patients on ChEIs, the incidence of significant cardiovascular events, such as symptomatic bradycardia and heart block, is rare, and frequent monitoring, such as with an electrocardiography or a Holter monitor, was resource-intensive and not justified.4 However, sick-sinus syndrome, bradycardia, and conduction abnormalities are considered relative contraindications to ChEI treatment due to the increased risk of significant bradycardia, which can lead to syncopal episodes, new onset seizures, and heart failure if untreated. Rowland and colleagues proposed a protocol to assist in managing cardiac patients requiring ChEI treatment, and while each clinic may manage patients differently, the protocol is consistent with the reviewed evidence.4

TE would be an appropriate candidate to initiate ChEI pharmacotherapy as long as his current bradycardia is asymptomatic. The provider would want to monitor TE’s pulse after 1 week of therapy and assess for symptomatic improvement of his dementia. Titration should be done carefully after 4 weeks of treatment, noting that the maximum recommended dose for mild Alzheimer’s disease is 10 mg once daily. TE and his family should be aware that any syncopal episodes or suspected seizures are cause for concern and should be reported to his physician. Given his second-degree AV block type 2 history, he has a low threshold for requiring a pacemaker and his cardiologist should be made aware of the new ChEI medication. Pulse checks should be done at baseline, every month while the dose is being titrated, and biannually thereafter. TE would likely benefit from the addition of memantine when his disease progresses to moderate Alzheimer’s disease, but clinical trials currently do not support the use of memantine in mild Alzheimer’s disease and the FDA has not approved it for this indication.