Researcher suggests that medications for high blood pressure may be useful in treating patients with slow-onset immunoglobulin A nephropathy, a topic he will present on this weekend at ASN Kidney Week in Orlando, Florida.

Jonathan Barratt, MBChB, PhD, Nephrologist and immunoglobulin A (IgA) nephropathy (IgAN) researcher at the University of Leicester, joins Pharmacy Times to discuss disease impact, the difficulty of IgAN diagnosis, and how protein in the urine can help nephrologists assess a patient’s success with current pharmaceutical treatment options.

Q: How does IgAN differ from other types of Glomerulonephritis?

Jonathan Barratt, MBChB, PhD: So IgAN is the commonest pattern of glomerular nephritis in the world, and each of the different forms of glomerular nephritis behave very differently. And an IgA nephropathy is typically a disease that affects young people, and it causes a slow progressive loss of kidney function over many years. And if you compare that say to a vasculitis or anchor-associated vasculitis, which causes a very severe inflammation in the glomeruli (and can cause kidney failure in a matter of weeks) it is a very different path. And IgAN is limited to the kidneys, whereas other conditions may have a kidney involvement but are affecting multiple other organs at the same time.

IgAN is distinct, in that it's only a disease that affects the kidneys. And it is a disease of younger people. And it carries a significant risk of kidney failure over the lifetime of that patient. The real challenge with managing patients and identify properties is often they don't have any symptoms. Classically, some will present with episodes of visible hematuria around 48 hours after picking up a cough or a cold. That's commonly the younger teenagers. But most commonly, in my practice [and] in adults, patients don't know they have the disease. They've had a urine dipstick test or a blood pressure chair test, or a blood test. for some other reason—they might be picking up new house insurance or a mortgage, or they might be moving jobs or starting universities… they've had health check. And suddenly, someone realizes that there's blood and protein in the urine, which you can't see. You can only see on a dipstick, or the blood pressure is too high, or the kidney function is not quite normal. And then that precipitates a whole series of investigations that ultimately leads to the person coming to see someone like me and a former guest. And then we will end up forming some more investigations and ultimately doing a kidney biopsy to work out what is going on.

Q: What are the symptoms of IgAN?

Jonathan Barratt, MBChB, PhD: There are lots of reasons for having blood and protein in the urine—and the commonest being actually urinary tract infection. But we know that if you have a significant glomerulonephritis or glomerular disease, you will always have blood and or protein in the urine. We know that that is a clear marker of glomerular disease of kidney disease. We don't routinely screen patients for kidney disease either in the US or in Europe. And there's lots of arguments for, and against, screening programs—going all the way through to cervical and breast cancer screening in terms of the pros and cons.

If we can see a fall in proteinuria, that tells us treatments aren't working. And it also means that that patient's risk of progressive kidney disease has reduced because there is a linear relationship between how much you reduce proteinuria with a treatment and how much kidney protection you will get long term with that particular therapy. So we use it to stratify our patients into high risk interest strategies—but we also use it to monitor response to therapy, and we know a lot of drugs can reduce proteinuria and therefore alter the risk of progression.

Q: What is the significance of biomarker, proteinuria, and developing pharmaceutical IgAN treatment options?

Jonathan Barratt, MBChB, PhD: In terms of drugs that impact on kidney health, we don't even need drugs. If we exercise, we're a healthy weight, we reduce the amount of sodium in our diet, we monitor and watch how much alcohol we drink, we don't smoke… all these things can improve kidney health. They can impact on the amount of protein in the urine, and they can protect against kidney function decline.

So a priority for all patients with kidney disease, particularly IGA nephropathy is to control the blood pressure and break that cycle. And we have lots of drugs available that can control blood pressure. The drugs that we really want to choose to use, particularly when there's protein in the urine, are the renin angiotensin system inhibitors, so angiotensin-converting-enzyme (ACE) inhibitors, like Ramipril, Lisinopril, and angiotensin receptor blockers like Losartan, Valsartan. And those are our drugs we go to first because we know that they will help control blood pressure.

But independent of their ability to control blood pressure, they will also reduce protein in the urine and protect against kidney function decline, so they are by far the most effective drugs in this situation. 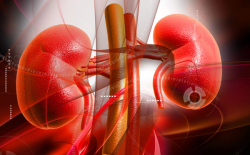