Pharmacists should be aware of the facts and fiction surrounding the use of homeopathic products.

Pharmacists should be aware of the facts and fiction surrounding the use of homeopathic products.

The practice of homeopathy started 200 years ago, and despite considerable criticism and controversy, many people find relief from homeopathic remedies. Advocates of homeopathy cite its lack of adverse effects, its patientcentered approach, and its low cost as reasons for its popularity. Critics say homeopathy is quackery and unfounded in science. Which is it?

Homeopathy is a traditional form of medicine that is significantly different from allopathy, the treating of disease using drugs and biologics that produce effects different from those produced by the disease under treatment. It is based on 3 principles.

The first principle, and the reason it is called “HOMEOpathy,” is the theory that “like treats like,” or “similitude.” Homeopathy’s founding father, German doctor Samuel Hahnemann (1745- 1843), noticed that consuming Peruvian Cinchona tree bark induced malaria-like symptoms—and also cured malaria. He surmised that plant, animal, or mineral substances that cause a particular symptom set in healthy people, when administered in homeopathic dosage forms to ill people exhibiting those symptoms, will cure the symptoms. He experimented with mercury, arsenic salts, and nux vomica, among other things. His experiments are considered some of the earliest work in toxicology. Although Hahnemann formed no explanation of a possible mechanism, the “like treats like” principle was born.1

Second, homeopaths believe that very small doses of plants, animal tissue, or minerals actually can cure, and their remedies gain potency with dilution. Often the substances used to make homeopathic remedies are toxic at undiluted concentrations. Homeopaths call the diluting process “succession.” They vigorously shake the original substance with alcohol or water to activate and ‘‘potenize’’ the substance. Conventional analysis is often unable to detect any molecules of original solute in the finished product. This is the theory with which most health care providers who believe in dose-response and evidence-based medicine have the most concern; they consider the product to be lacking in active ingredients.1,2

Third, homeopaths believe in individualized therapy based on symptoms. They believe that each patient has a unique personality and symptom pattern of illness. Homeopathic practitioners select remedies to address the patient’s specific symptom variation. In this way, homeopathy does not differ from traditional medicine—good allopaths do the same.

Can homeopathy’s extreme dilutions produce a real clinical, biologic, and pharmacologic effect? Pharmacists’ training and experience may lead us to dismiss these products. Recent science, however, has been able to identify particles and processes that, until just recently, seemed infinitesimal, and in fact were immeasurable. (Consider Phase 0 investigational studies—oncology researchers can now give volunteers a few tiny, subtherapeutic doses of an investigational agent and monitor whether the agent reaches the tumor, how it circulates and distributes throughout the body, and how cancer cells respond.3) These cellular-level advances may someday explain how some homeopathic products work.2 Currently, a few theories have been advanced.

Some people suspect that homeopathy works because many conditions improve naturally, and the homeopathic remedy does neither harm nor good. Others cite placebo or nocebo effect, both of which can be powerful.11 Patients’ conditions may respond to the consultation and increased attention alone. The homeopath may be better able to convince patients to implement lifestyle changes.

Some patients like homeopathic remedies. A study conducted in England, where homeopathy is covered by the National Health Service,12 found that 44% of a homeopathic clinic’s patients had suffered with a medical problem for more than 5 years; help from primary or secondary care providers was unsatisfactory. Overall, 73% of patients (n = 183) who were treated with homeopathic remedies reported symptoms, activity, and well-being improvement at 6 months. Approximately 25% of patients reduced their conventional medications at 6 months.12

Pharmacists may field questions from patients about homeopathic medications. Some common products are listed in the Table.13-15 The best approach is to answer all questions respectfully and truthfully. Remember that data are mixed, yet some rigorous studies have shown that certain remedies work. It appears that the safest, most effective use of homeopathy is in conjunction with traditional care. Dismissing positive patient experience as a delusion or placebo effect is ill-advised. 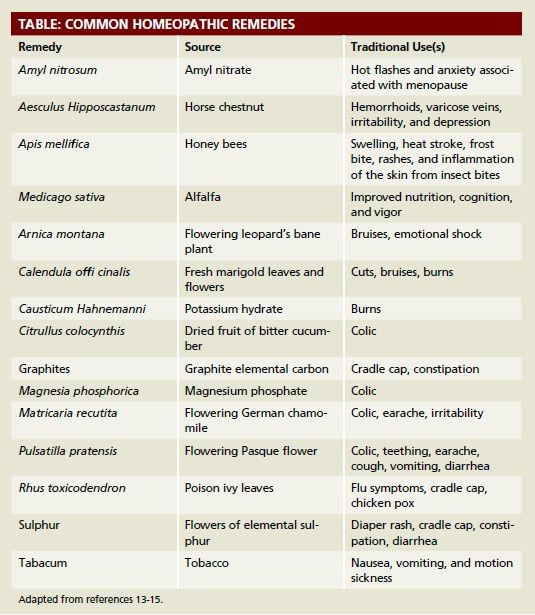 It is always best to keep an open mind where patients and treatments are concerned. Many allopathic medications have unknown mechanisms of action, and some have never been proved effective. Ultimately, each pharmacist may not need to know intricate details of homeopathy, but should know the general principles.

Clathrates (also known as IE crystals and icelike crystals). Some researchers propose water clusters called clathrates may explain how homeopathic dilutions transfer a substance’s medicinal properties to a vehicle solvent. Clathrates grow like crystals during the dilution process, and the evidence for their presence is measured by oscillatory effects on the vehicle fluid.

Hormesis. Also known as the Arndt-Shulz Law, hormesis describes a stimulatory effect caused by small amounts of potentially toxic substances. The theory was first proposed by Stebbing in 1982. This theory has become progressively more useful to the fields of toxicology, pharmacology, and risk assessment, where low-dose effects are of interest.

23. Coghlan A. Is this the trick that proves homeopathy isn’t hokum? common sense says it shouldn’t work, but scientists now agree that something weird happens when you add water. New Sci. 2001;172:4-6.