Big changes are coming in the generic marketplace worldwide in the coming decade.

Big changes are coming in the generic marketplace worldwide in the coming decade.

The use of generic medications today is commonplace. Impassioned discussions at the pharmacy counter regarding the propriety of dispensing generic medications are less common than they used to be. A combination of factors has been responsible for the trend of increased generic usage in the United States and globally. The expiration of patents, emerging markets, an aging population, the increase of chronic diseases, and the efforts of governments and health care service providers have all contributed to the increased use and acceptance of generic drugs.

The United States has the largest pharmaceutical market worldwide. Factors that have driven the market include the large US health care system, high per capita income, and large investments in drug development. The generic drug sector has gained a greater market share than the branded segment in both revenues and prescription volume due to a demand for cost-effective drugs, government regulations, and patent expirations, as reported by market research and information analysis company RNCOS in Booming US Generic Drug Market. 2

Trends in Spending and Usage

Patients being treated for a chronic disease state using generics are more likely to continue their drug therapy and have their prescriptions refilled than those patients using branded drugs. In 2010, generic continuations for a chronic condition increased by 11%, whereas the numbers of brand continuations declined by 12%. 1

Within the initial 6 months of patent loss, patients now receive the generic form of the medication 80% of the time. This is a significant increase from 2006, when 55% of prescriptions filled post-expiry were generic. These statistics reflect the trend toward the increased use of generic medications. 1

Total spending on medications increased from $300.3 billion in 2009 to $307.4 billion in 2010. The increase in costs associated with rising brand prices was partially offset by brands losing patent protection or exclusivity in 2010 and a decline in the volume of protected branded products, despite increased spending on generics. 1

An important factor for increased generic drug usage is that the decreased cost of the generic is attractive to the consumer. Although much of prescription cost is covered by third parties, patient costs are often significantly less for generic products. The third parties or pharmacy benefit managers encourage or require the consumer to use a generic drug when possible through copay tiers and formularies.

As reported by the Generic Pharmaceutical Association, the average retail price of generic medications was less than one-third the price of brand-name medications in 2007. 3 IMS reported an average decline in prescription copayments of 1.8% from 2009 to 2010. The average copays for branded drugs increased by more than 7%, whereas the average copay for generic drugs increased by 5.2%. The consumer saved $1.32 per copay primarily due to change in numbers of generic prescriptions filled as compared with brand-name drugs. 1 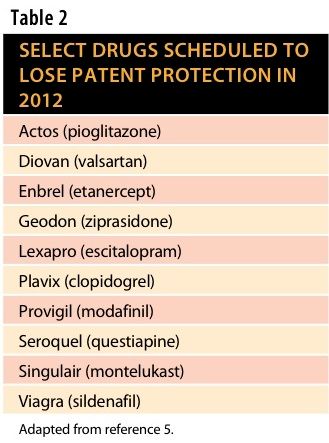 The global generic drug market is expected to grow to $231.02 billion by 2017, a compound annual growth of 9.3% from 2010. Key driving forces for this market growth include patent expiration of some blockbuster drugs, biosimilars, emerging markets, and cost containment efforts of governments and health care service providers. 4

“The patent expiry of several major blockbuster drugs worth $150 billion between 2010 and 2017 will fuel the growth of the global generic pharmaceuticals markets,” reports Frost & Sullivan. Pfizer’s Lipitor (atorvastatin calcium) came off patent in the United States at the end of 2011 and will lose patent exclusivity in Europe in 2012. Lilly is expected to lose $3 billion in revenues from generic competition for Zyprexa (olanzapine), which also went off patent late in 2011. 4

Table 2 lists some of the drugs expected to lose patent protection in 2012.

The market for biologic drug products is increasing. These drugs include vaccines, gene therapy, and blood components. Biologic medicines are derived from living organisms, such as yeast and bacteria. These drugs exhibit high molecular complexity, and can be more sensitive to changes in manufacturing processes than medications made by other chemical processes. Biologics are used to treat cancer, HIV/AIDS, Alzheimer’s disease, and other life-threatening diseases. Some of the better known biologic drugs will have patents expiring soon. These include Rituxan (rituximab), Remicade (infliximab), and Enbrel (etanercept).

An abbreviated licensure pathway to allow biosimilar product development for products that are demonstrated to be biosimilar to or interchangeable with FDA-licensed biologic products was established by the Biologics Price Competition and Innovation Act of 2009. The FDA recently drafted documents to provide guidance to manufacturers for biosimilar product development. The manufacturer will have to prove that the biosimilar drug is highly similar to the licensed FDA biologic product “reference product” and will be expected to produce the same clinical results as the reference product in any given patient. 6

According to the Generic Pharmaceuticals Market—A Global Analysis report, “The trend is shifting towards less competitive, yet commercially attractive segments such as difficult-to-produce generics, specialty generics and biosimilars. Biosimilars are currently growing at the rate of 40.0 per cent and are projected to grow at a compound annual growth rate of 79.0 per cent between 2010 and 2017.” According to a report published by RNCOS, Global Biosimilars Market Forecast to 2015, the biosimilar market will grow to $2.5 billion by 2015. Most of today’s biosimilar market is in Europe, but growth is expected in the United States. 7

Revenue from health care expenditures is expected to shift from developed markets to emerging markets. Growth potential of 15% to 20% annually is predicted for emerging markets such as Brazil, Russia, India, China, Turkey, and South Korea. “Despite the high levels of generic penetration and market saturation, the United States will remain the largest generic pharmaceuticals market in terms of value, owing to the relatively higher profit margins and legislations favouring the growth of generics,” according to the Frost & Sullivan report. Even in the emerging markets with currently low generic penetration, regulations favoring the use of generics will enhance the use of generic drugs. 4

Increased government regulations and price control measures create additional challenges for drug manufacturers. The aging population and the increased incidence of chronic illnesses have given rise to improved measures to control health care spending. Frost & Sullivan’s research shows that “The key therapeutic areas available to generic competition during the forecast period include cardiovascular, CNS, oncology, and rheumatology, attracting the attention of industry participants.” 4

The United States is experiencing a recession, but the generic drug market is not only surviving, it is thriving. The elements driving the market’s success are multifactorial. As the population of the country ages and more chronic diseases are treated with medications, the need for cost-effective drug therapy will continue to grow. It will be interesting to observe how the industry, health care providers, and most importantly, the patients will embrace the upcoming arrival of biosimilar drugs.

Dr. von Koeckritz is a medical writer who resides in Westminster, Maryland, and practices pharmacy at Carroll Hospital Center.