Ten percent of individuals worldwide are affected by autoimmune diseases, with systemic lupus erythematosus being one of the most common.

Ten percent of individuals worldwide are affected by autoimmune diseases, with systemic lupus erythematosus (SLE) being one of the most common.1 Drug-induced lupus erythematosus (DILE) was first recognized in 1945 with sulfadiazine as the offending agent.2 Since then, more than 90 medications from more than 10 drug classes have been implicated in causing lupus.1,3 DILE is estimated to affect 15,000 to 20,000 individuals each year and accounts for 10% of SLE cases.1,2 Risk factors for DILE include being a slow acetylator, having certain serologic features (eg, HLA-DR4 and HLADR0301), having complement C4 null allele, and being female.2

DILE is similar to idiopathic SLE. However, the prognosis of DILE is promising compared with that of SLE. DILE presents itself after exposure to the offending medication and the symptoms usually resolve within weeks of discontinuing the offending agent.2 Refer to Table 13 for a comparison of DILE and idiopathic SLE. 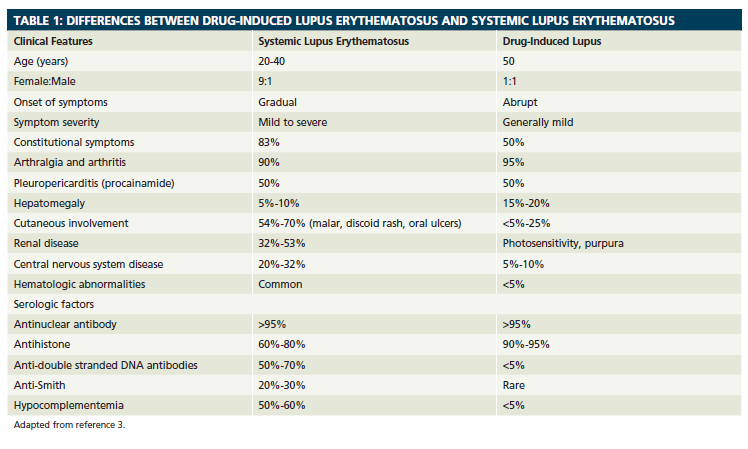 Patients presenting with DILE may experience fever, arthralgia, arthritis, myalgia, or serositis. In fact, 90% of affected patients present with arthralgia and 50% present with myalgia.2 After initiation of an offending medication, DILE can develop from 1 month to more than a decade after exposure to it.2

DILE can be defined by the following, according to Dipiro and colleagues4:

Medications reported to have a definite relationship to DILE, based on controlled studies, include the following2:

Procainamide and hydralazine are associated with the highest risk for developing DILE. Procainamide carries a 15% to 20% risk and hydralazine carries a 7% to 13% risk.3 Quinidine has been classified as having a moderate risk.1 Refer to Online Table 22,3 for a list of medications and their likelihood of causing DILE.

Table 2: Drugs Implicated in the Development of Drug-Induced Lupus Erythematosus

Adapted from references 2 and 3.

Recently, DILE has also been associated with newer medications on the market, which include tumor necrosis factor (TNF) blockers and interferons. There have been several cases of TNF-alpha antagonist—induced lupus syndrome, which is otherwise known as TAILS.3

TNF blockers include the following:

According to an article published in Lupus, “Most cases of TAILS have been … due to infliximab because it is the most immunogenic based on its chimeric structure and its ability to reach high tissue concentrations, followed by etanercept and adalimumab, which is a humanized monoclonal antibody. Only one case has been described with certolizumab pegol, and we are unaware of any cases being reported following golimumab therapy.”3

The interferons that are implicated in DILE include interferons alpha and beta. However, interferon alpha carries the highest incidence of DILE.1,3 Other medications that may be linked to DILE include ticlopidine, various statins, and lisinopril.2,3

Medications that are thought to cause lupus include the following:3

There have also been reports of drugs inducing subacute cutaneous lupus erythematosus (SCLE). Medications that have been implicated in SCLE include antihypertensives (calcium channel blockers, angiotensin-converting enzyme inhibitors, beta-blockers), terbinafine, ticlopidine, and statins.1 Refer to Online Table 31 for a list of medications implicated in SCLE.1

Because there are no set criteria for diagnosing DILE, diagnosis presents a challenge. When making a diagnosis, a clinician must be aware of the differential diagnosis, which includes drug hypersensitivity, eosinophilia- myalgia syndrome, serum sickness, toxic oil syndrome, hemolytic anemia, and other environment factors.1

Once DILE is confirmed, stopping the offending agent is the first step in treatment. When treating musculoskeletal symptoms, nonsteroidal anti-inflammatory drugs can be prescribed.4 If symptoms are serious, more aggressive therapy can be prescribed. In these cases, corticosteroids are considered first-line treatment.3

Although DILE has a more favorable prognosis than SLE, prompt diagnosis and discontinuation of the offending agent are critical. Once mainly associated with cardiovascular drugs, DILE is now associated with more drug classes, including TNF blockers and interferons. Because these agents are used to manage autoimmune disorders, diagnosing DILE can be challenging. The challenge is being able to differentiate a true drug-induced lupus from an exacerbation of preexisting lupus or the unmasking of a second autoimmune disease.1

Dr. Garza received her doctor of pharmacy degree from the University of Texas at Austin. She is currently working as the director of the Life Sciences Library at RxWiki, where she continues to build her practice on the fundamental belief that providing patients with medication information and medical knowledge contributes significantly to the quality of care they receive and improves quality of life and health outcomes. Her work focuses on educating patients and providing them with the resources needed to navigate the overwhelming and complex health system. Before RxWiki, she was director of pharmacy for a Central Texas Department of Aging and Disability facility.