Customer satisfaction with supermarket and drugstore chain pharmacies has improved in the last year, while ratings for mail-order and mass-merchandiser pharmacies have dropped, according to the J.D. Power 2015 US Pharmacy Study.

Customer satisfaction with supermarket and drugstore chain pharmacies has improved in the last year, while ratings for mail-order and mass-merchandiser pharmacies have dropped, according to the J.D. Power 2015 US Pharmacy Study.

Supermarkets’ overall customer satisfaction scores improved from 843 in 2014 to 851 this year, while chain drug stores’ ratings improved by 2 points.

Wegmans, with 887 points out of a possible 1000, earned the highest honors overall and among supermarket pharmacies, followed by Publix and H-E-B. 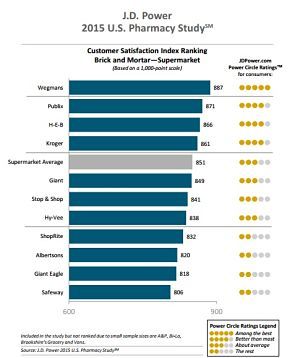 In a press release, Good Neighbor Pharmacy noted that this was the third year it had taken the top honor in this category and the fifth recognition in 6 years. 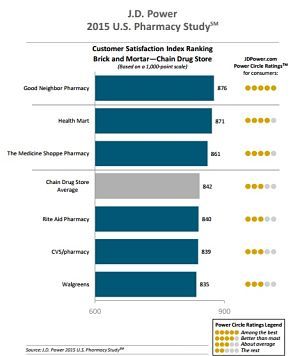 “Locally owned and operated pharmacies Good Neighbor Pharmacy, Health Mart, and The Medicine Shoppe Pharmacy bested the competition in their market segment of the survey,” Hoey said in a statement. “The patient-first approach of these and all independent community pharmacies to customer service resonates with consumers and this study reaffirms that fact.”

Target, with 858 points, nabbed the top spot among mass-merchandiser pharmacies, with Sam’s Club and Meijer following. 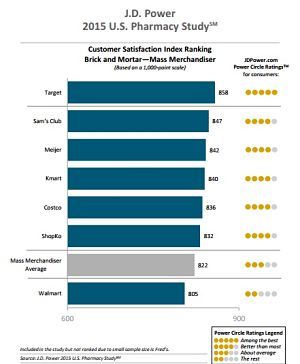 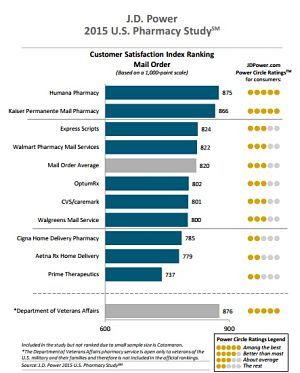 Lower-scoring pharmacies may want their employees to start asking patients if they would like to speak with a pharmacist when dispensing medications, because this led to a 54-point bump in customer satisfaction. Speaking with a pharmacist also increased the likelihood that a patient would buy other products in the store and be more loyal to the pharmacy.

Other offerings, such as a private space to consult with a pharmacist, also improved customer satisfaction scores.

Customers who used health testing and wellness services were also more likely to recommend a pharmacy and feel loyal to their store. These services also upped the odds of customers purchasing non-prescription products.

Being able to obtain the next refill before running out of medication was a big factor for customer satisfaction for both brick-and-mortar and mail-order pharmacies. The study reported that 91% of customers who frequent brick-and-mortar pharmacies get their prescription when or before promised.

The survey involved 14,914 customers who had filled or refilled a prescription during the 3 months prior to the survey period, which was between May and June 2015.