Swisslog Healthcare's Relay, which will deliver medications and supplies, has the potential to assist staff members with daily tasks and deter drug diversion.

A robot that will deliver medications and supplies throughout a health care facility or hospital has the potential to assist staff members with daily tasks and deter drug diversion.

Relay robot was introduced and demonstrated by its supplier, Swisslog Healthcare, at the American Society of Health-System Pharmacists (ASHP) 2018 Midyear Clinical Meeting in Anaheim, California.

Designed and developed by Savioke, a company specializing in service robots, Relay relies on artificial intelligence (AI) and laser technology. The robot has the ability to move about a clinical space on its own, carrying pharmaceutical products in a locked, temperature-controlled compartment.

Relay is the first front-of-house autonomous service robot for health care use, according to Swisslog Healthcare.

“Relay is secure and safe,” Raymond Castro, director of solutions management and transport automation at Swisslog Healthcare, said in an interview. “It can navigate through hallways, onto elevators, open automated doors, all while avoiding contact with people and obstacles in its path.” 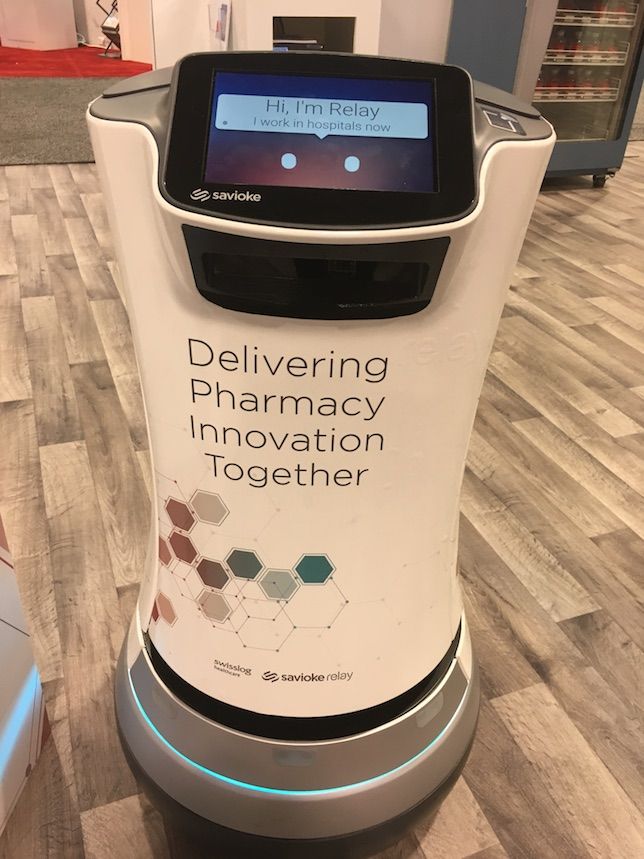 Traditionally, robotic technology in hospitals have been used out of view of most visitors.

However, Relay was designed to operate in a space with people who are not trained to interact with it nor accustomed to sharing space with a robot, Castro said.

“That’s different from other mobile robotic technology in health care. We can take this kind of automated mobile transport into the front of the hospital,” Castro said.

“We can serve use cases, perhaps through a main lobby. Relay can join visitors on elevators," Castro said.

"It does not need dedicated elevator space. Really, it can integrate throughout all those public spaces," Castro said.

"That is really the key innovation of Relay," he said.

Relay was designed with safety for people in mind but also to appeal to those with whom it interacts, Steve Cousins, Savioke's chief executive officer and founder, said in an interview.

Its height of 3 feet and curved, smooth design are conducive to hugs from children, and it can be outfitted with custom wrapping that displays a health system’s logo or other images.

Relay has origins in the hospitality industry, where is it has been serving hotel guests, he said.

The robot was initially tested by having it deliver items to rooms without assistance from staff and relying on guests to operate the transaction.

“Every user was a first-time user. We had to make it work for them,” Cousins said.

Savioke Healthcare’s partnership with Swisslog has allowed Relay to move into health care.

There is interest in Relay from a growing number of health systems and hospitals that offer inpatient and outpatient services, according to Swisslog Healthcare.

Relay is a modern alternative to the more than 2300 pneumatic tube systems in operation across the United States, which are already carrying blood, laboratory samples, medications, band other items critical to patients, according to Swisslog Healthcare.

The robot can assist pharmacy staff members by saving them time and can help mitigate workforce shortages by performing certain tasks, Castro said.

“Relay can take care of all of those manual delivery tasks and allow the skilled staff to focus on the things that they were trained and licensed to do, what the hospital is paying them to do,” he said.

The robot can be used to transport larger items, as well as hazardous medications, including chemotherapy, many of which cannot be sent through a tube system.

“One of our university hospital clients is using Relay to transport infusion medications to patient care areas, freeing up pharmacy staff for more meaningful work,” Michael Blondin, vice president of solutions management for Swisslog Healthcare, said in a statement.

Accessing the payload requires authorization to unlock the secure compartment, and Relay’s data and movements are trackable, which can help deter drug diversion.

The compartment could be set up to provide access only to certain staff members, such as requiring a nurse’s badge to unlock it, Cousins said.

Relay has the potential to become commonplace in health care facilities, Castro said.