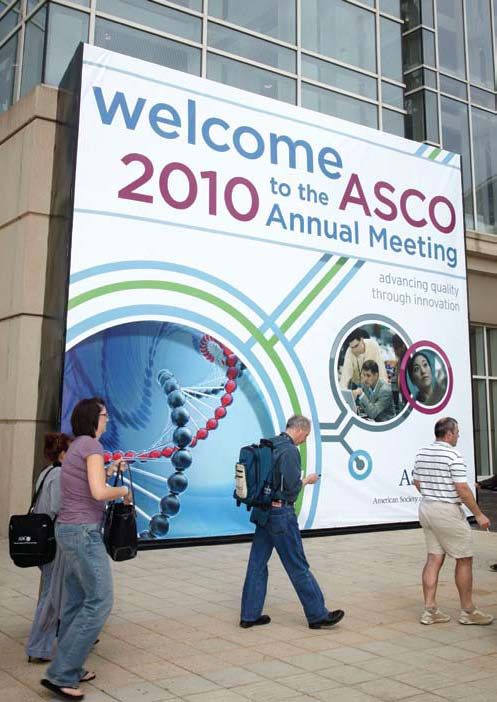 A decade ago, imatinib mesylate (Gleevec) transformed chronic myeloid leukemia (CML) from a deadly condition to a manageable one, improving the 10-year survival rate from 20% to more than 80%. In recent years, the FDA has approved nilotinib (Tasigna) and dasatinib (Sprycel) as second-line therapies. The next step, according to researchers at this year’s American Society of Clinical Oncology annual meeting, is to move these second-generation tyrosine kinase inhibitors (TKIs) to the front line. New data from phase III studies show they are more effective than imatinib at inhibiting the BCR-ABL kinase, a genetic mutation characteristic of CML, and at inducing response. 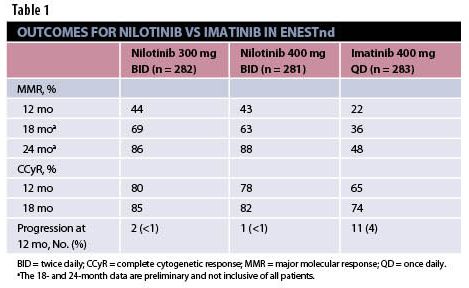 In June 2010, the FDA approved nilotinib for newly diagnosed CML based on findings from the ENESTnd study. Approximately 900 patients were randomized to 300 mg or 400 mg of nilotinib twice daily or 400 mg of imatinib once daily (Table 1). Giuseppe Saglio, MD, University of Turin San Luigi Gonzaga Hospital in Italy, a study investigator, said ENESTnd found that nilotinib was superior to imatinib at inducing major molecular response (MMR) and complete cytogenetic response (CCyR) at 12 and 18 months’ follow-up.

MMR represents a decrease in levels of the abnormal BCR-ABL gene to ≤.1% of baseline, and once it has been achieved, disease progression from chronic phase to accelerated or blast phase is unlikely. CCyR occurs when bone marrow cells show no evidence of the Philadelphia chromosome associated with most cases of CML. “The rate of MMR that can be achieved with nilotinib is twice the rate that can be achieved with imatinib after 1 year,” Dr. Saglio said (44% vs 22%, respectively). Nilotinib was well tolerated, with most adverse effects considered mild and manageable and no serious cardiac events. 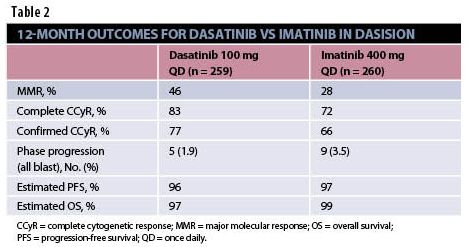 Like imatinib, dasatinib and nilotinib are oral medications, and failing to take them as prescribed is the major cause of poor response. “Thirty percent of patients, when they have resistance, they’re noncompliant,” said Elias Jabbour, MD, assistant professor at the Department of Leukemia at M.D. Anderson Cancer Center in Houston, Texas.

Drs. Saglio and Jabbour emphasized the need to make sure that patients understand the consequences of nonadherence. “A study by David Marin in the May 2010 Journal of Clinical Oncology showed that compliance does correlate with long-term outcome, so always educate patients about compliance—about taking the drug as prescribed, at the accurate time, and not to miss any dose,” said Dr. Jabbour.

Dr. Saglio stressed the importance of regular follow-up to monitor response and assess how patients are feeling. “Even minor problems of tolerance may be important, because this is a chronic therapy. Minor problems may become bigger,” he said.

If the patient is taking the drug as prescribed, but response is poor, Dr. Jabbour recommends genetic sequencing. “If you have the T315I mutation, you don’t want to waste your money and time on the new drugs. Go for clinical trials or transplant.” Other mutations predispose patients to be less sensitive to one TKI or the other, and because nilotinib and dasatinib have different mechanisms, patients who do not respond to one might find success with the other.

Dr. Jabbour believes the higher response rates justify using nilotinib and dasatinib in the front line. “In cancer, you go to war and you use your best weapons up front,” Jabbour said. “With imatinib therapy, 65% will do great but 35% would not respond or respond and lose their response. I have no tool to select these 35% up front,” he explained. “With these new drugs [up front], almost 100% are responding very well at 6 months.”

Dr. Saglio said patients currently responding well to imatinib should stay on it. Dr. Jabbour agreed. “Do not switch patients unless they fail. If you are a coach of a basketball team and you have a player who is scoring 25 points the first quarter, you don’t bench him and replace him with somebody stronger. If you’re winning and scoring, you stay the course,” he said.

The CML story validates the shift toward a more personalized approach in cancer care, as science increasingly disproves the notion of a one-drug-fitsall solution. New biomarkers are being uncovered that can be used to predict response or failure to an established therapy or guide the development of new therapies. This has allowed the transformation of previously fatal diseases to chronic conditions. While a cure for CML is not around the corner, Dr. Saglio believes these second-generation TKIs might be the next best thing for many patients.

Christin Melton is editorial director of Oncology & Biotech News and Contemporary Oncology. She has written several articles on chronic myeloid leukemia over the past several years and interviewed many of the world’s top researchers investigating new treatments in this disease.