New technology is making it easier for researchers to collect data on sleep patterns for large populations, including college students across the country.

New technology is making it easier for researchers to collect data on sleep patterns for large populations, including college students across the country.

In the past, studies of students’ sleep patterns were often small, short, and confined to a single university, but new research relying on data from Jawbone’s wearable UP device was able to analyze sleep information from 18,498 students across 137 schools.

The data included 1.44 million nights of sleep from students wearing UP between 2013 and 2016. UP defined students as those aged 18 to 22 years with syncs on campus in at least 3 months between the months of September and June.

The researchers determined sleep averages across each university by computing the average sleep for men and women, and then weighing them by the school’s gender distribution.

The number of hours of sleep doesn’t include naps or time spent lying awake in bed.

Here are 4 new findings on students’ sleep habits, based on UP data:

1. There’s a relationship between average bedtime on weeknights and the school’s score on U.S. News & World Report 2016 college rankings.

Schools with a reputation for a rigorous academic program tended to have students who went to bed later. 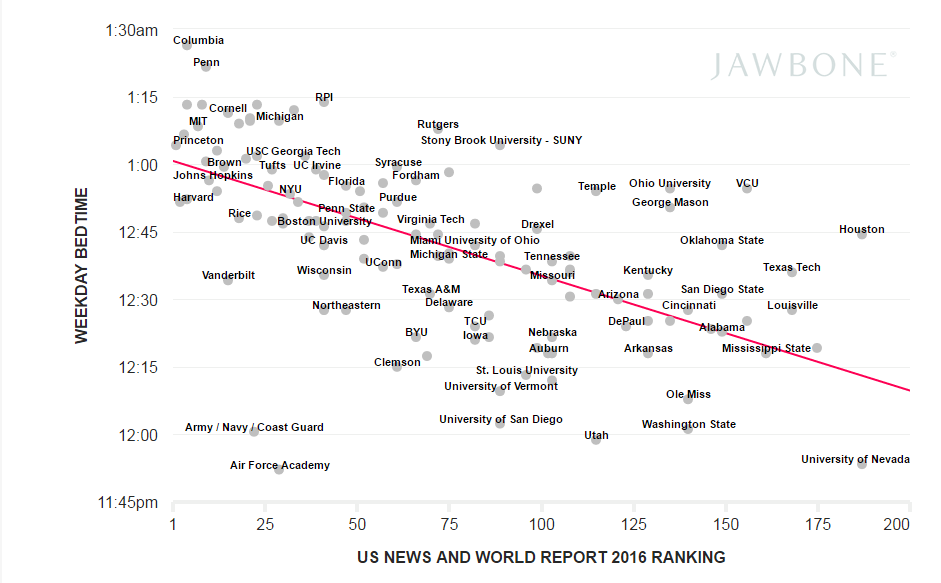 The researchers didn’t find a strong relationship between bedtime and urban schools versus rural schools.

“The relationship between these rankings and amount of sleep was also weak,” the researchers stated. “This seems to confirm the findings…that higher general intelligence (but not necessarily academic performance and grades) is associated with night owls.”

Last year, Sleep Health: Journal of the National Sleep Foundation updated its guidelines for sleep goals. The foundation’s panel added sleep goals for a new age group—those aged 18 to 25 years&mdash;and stated that these individuals should get around 7 to 9 hours of sleep each night.

However, 6 hours and as many as 11 hours of sleep each night may be appropriate for some college-aged individuals, according to the foundation.

Although the sleep averages seen for students fall within the foundation’s 7- to 9-hour range, the UP researchers pointed out that the data could also be interpreted as students getting less than 7 hours of sleep on 46.2% of nights.

3. Women get more sleep than men.

Women tend to get more shuteye than men, as the female students got about 23 more minutes of sleep per weeknight and 17 more minutes per weekend night.

4. Not surprisingly, students at military academies tend to get less sleep.

The schools with the least amount of weekday night sleep on average were:

The Air Force Academy also had the earliest weekday bedtime (11:52 PM) of all schools.

The schools with the largest amount of weekday night sleep were: