According to the National Institutes of Health, 18.2 million Americans (6.3% of the US population) have diabetes.1 Type 2 diabetes accounts for ~90% to 95% of all diabetes. This disease is associated with obesity, a family history of diabetes, older age, and physical inactivity. Type 2 diabetes also is more prevalent among African Americans, Hispanic/Latino Americans, American Indians, and some Pacific Islander and Asian Americans.

Metformin, a biguanide, acts by decreasing hepatic glucose production, decreasing intestinal absorption of glucose, and improving insulin sensitivity by increasing peripheral glucose uptake and utilization. Fortamet ER uses a single-composition osmotic technology (SCOT), consisting of an osmotically active core formulation surrounded by a semipermeable membrane. Two laser-drilled holes on either side of the tablet enable the drug to exit the tablet at a constant rate.3 Absorption is increased by ~60% when the drug is taken with food. The half-life is approximately 5.4 hours, and ~90% of the drug is renally eliminated within the first 24 hours.

Metformin's safety profile has been well-studied, and thus safety precautions are similar to those of other products containing metformin. A black box warning identifies the rare, but potentially fatal, complication of lactic acidosis, caused by metformin accumulation. Beginning with subtle malaise, myalgias, respiratory distress, increasing somnolence, and gastric distress, this condition may be associated with hypothermia, hypotension, and resistant bradyarrhythmias.

Renal function must be monitored, and Fortamet ER is not recommended for patients with severe renal impairment or patients over the age of 80. Individuals with impaired hepatic function should avoid Fortamet ER use, and patients undergoing a surgical procedure should suspend use until oral intake has returned to normal. Individuals should be cautioned to avoid excessive alcohol use because metformin's effect on lactate metabolism is potentiated by alcohol. Persons with hypoxic states?such as sepsis, acute myocardial infarction, or pulmonary embolism?should not take metformin because of the increased risk of lactic acidosis. Fortamet ER is a pregnancy category B agent, although no adequate studies in pregnant women have been performed.

Fortamet ER shows promise for diabetic patients because of its convenient dosing schedule and safety profile. It is available in 500- or 1000-mg film-coated tablets. The 1000-mg tablet is the first available to be taken only once daily. The tablet is smaller and easier to swallow than other extended-release metformin tablets. The suggested starting dose is 1000 mg once daily with the evening meal, and the dose should be titrated up in increments of 500 mg weekly, up to a maximum of 2500 mg.

For a list of references, send a stamped, self-addressed envelope to: References Department, Attn. A. Stahl, Pharmacy Times, 241 Forsgate Drive, Jamesburg, NJ 08831; or send an e-mail request to: astahl@mwc.com. 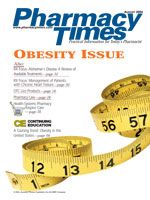