Coping with Rosacea: A Guide from Triggers to Treatments

Rosacea is a chronic, inflammatory disorder of the skin. It affects almost 16 million American adults. It is poorly understood, yet it is spreading worldwide. Rosacea causes inflammation of the nose, cheeks, chin, eyelids, or forehead. It can also cause redness of the face and pus-filled bumps similar to acne. Often it affects the eyes, causing inflammation of the eyelids. It is more common in women, but in men it can result in a more severe disorder. Rosacea causes redness in the face, eventually causing very small red bumps. The disorder usually begins between the ages of 30 and 60 years.

Because of the redness and acnelike aspect of the disorder, rosacea can cause social and psychological problems if symptoms are not controlled. Often, people with rosacea tend to have a lower self-esteem. They avoid social and professional gatherings, and even contact with friends and family, because of the embarrassment caused by the symptoms.

Rosacea tends to have phases:

• Pre-rosacea—In the beginning, skin flushing is seen. Then redness and the appearance of small visible blood vessels sets in. The redness is due to the dilation of blood vessels in the skin.

• Vascular Rosacea—At this point, the symptoms start to worsen, and the skin becomes very sensitive. There is inflammation on the nose and checks.

Doctors do not really understand what causes rosacea. Researchers think it is probably due to the environment or could run in families. Treatment and lifestyle modifications are aimed at reducing the symptoms and improving the skin.

You are more likely to develop rosacea if you:

A number of factors can make rosacea worse.

The first step in treating rosacea is avoiding your known triggers, which vary from person to person. A good place to start is to stay away from skin lotions and makeup that can aggravate the problem. Avoid extremes in temperature, spicy foods, alcohol, and stress or emotional problems. You should also limit sun exposure, especially if you are taking medication that makes you more sensitive to the sun, such as certain diuretics and antibiotics.

Alcohol can aggravate the symptoms, but people who do not drink alcohol can develop rosacea. Without proper treatment, rosacea can worsen and the skin can become disfigured, with more redness, bumps, and thickening of the skin.

Although there is currently no cure for rosacea, there are ways to control the symptoms (Table). The more unsightly symptoms of rosacea can be minimized with the use of creams and antibiotics. Creams are usually used before antibiotics to avoid unnecessary side effects from antibiotics, such as nausea, vomiting, diarrhea, photosensitivity, allergic reactions, and vaginal yeast infections. Creams have proved to be safer and have fewer side effects. Metronidazole gel works as well as some antibiotics and is the treatment of choice. Some patients will feel stinging and burning of the skin when using metronidazole. Metronidazole is available in both an oral (pill) and topical (cream, gel, lotion) form. Both forms can cause a flushing reaction, so avoid alcohol during treatment. 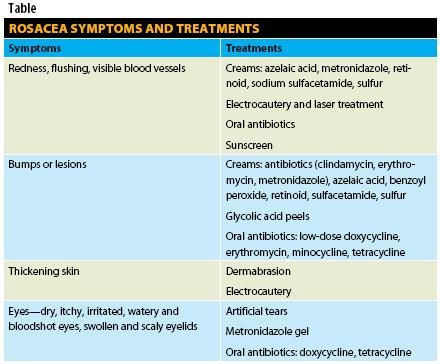 Low-dose oral antibiotics, such as doxycyline, may have faster results than the cream alternatives. When symptoms are more severe, or during a flare-up, antibiotics are used first. Your doctor may prescribe a combination of topical and oral antibiotics.

Retinoids, including topical tretinoin and low-dose oral isotretinoin, are similar to vitamin A. Doctors sometimes prescribe these to treat rosacea when antibiotics fail. Retinoids may help reduce the appearance of pus-filled or red bumps, but sometimes make skin redness and spider veins look worse.

If you use retinoids, avoid supplements with vitamin A, which can cause serious side effects when taken in excess. Glycolic acid facial peels can also sometimes help control rosacea symptoms. If there is thickening of the skin, laser treatments, although costly, are another option. Electrocautery, in which a device delivers a low-powered electrical current, can also help improve the appearance of thickened skin, as well as destroy visible blood vessels. If rosacea has affected the eyes, artificial tears for the dryness and an antibiotic gel for the eyelids are usually prescribed. In some cases, oral antibiotics are needed to clear up the symptoms.

Several natural remedies have been studied and have been shown to relieve symptoms to some degree. Many nonprescription products are available as a combination of these. Natural or herbal products and ingredients that may ease rosacea symptoms include: 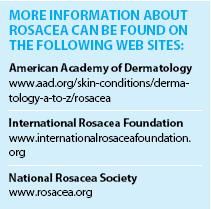 Keeping it in Control

Many times patients must work with their doctors to maintain a skin regimen, which should involve good, gentle cleansing with no scrubbing. Patients with rosacea should use mild skin care products and effective sunscreens. A moisturizer with ingredients such as ceramides, glycerin, and hyaluronic acid is preferable.

Even when medication is needed, one of the most important factors in treatment is keeping triggers in control. Rosacea is a disorder than can be managed, but symptoms must be monitored in the rare severe cases. PT