Authority and Scope of Vaccination: How States Differ
2017-06-22 17:08:22
Sharon Xavioer, PharmD; and Jeff Goad, PharmD, MPH
Immunization is considered 1 of the 10 greatest public health achievements of the 20th century.1 Pharmacists have played a role in immunization since the late 1800s, originally assisting physicians with the distribution of smallpox vaccine.2 Over the last 2 decades, the role of pharmacists in immunization delivery has expanded significantly. The American Pharmacists Association (APhA)’s Pharmacy-Based Immunization Delivery Certificate Training Program is commonly used to train pharmacists on national immunization standards and recommendations set by the CDC.3 At present, more than 280,000 pharmacists have been trained to immunize. All 50 states, the District of Columbia (DC), and Puerto Rico allow for pharmacist-provided immunization in some capacity.4,5 The pharmacy profession has been recognized by the CDC for the impact it has had on immunization rates necessary to combating vaccine-preventable diseases.6

Despite all this, vaccine rates still fall short of desirable goals, such as those outlined in the Healthy People 2020 national initiative.7 Although the CDC and APhA promote the “immunization neighborhood” concept, meaning all appropriate professions should coordinate, communicate, and collaborate to increase immunization rates, challenges are still evident for pharmacies.8 One major factor is the variability in state laws and regulations that govern vaccine administration by pharmacists.5 Significant regulation differences limit which vaccines are permitted, which age groups of patients can be immunized, and which practice model pharmacists may operate under.9

Immunization Models
Pharmacists are authorized to administer immunizations under 3 primary models: prescription from another provider, vaccination protocol, or independently without a prescriber’s order or protocol.5,9 When a state requires a vaccine to be prescribed by a physician, the patient needs to see a physician to get the prescription to then have it administered at the pharmacy. This drives up the cost of health care and increases the barriers and time involved. A vaccination protocol stipulates which vaccines, under which conditions, and which procedures to follow for pharmacists administering vaccines agreed to by a physician or, in some cases, a state public health department.10 An independent model gives pharmacists the authority to directly screen, assess, and administer vaccines autonomously without a protocol or a prescription from a physician.9,10 Many states have more than 1 model operational at the same time.

Independent Administration
As of July 2016, 17 states allow pharmacists to independently administer select vaccines; the other 33 states, Puerto Rico, and DC require other administration models (Figure). In some of the 17 states, only a few vaccines can be independently administered. For example, New Hampshire pharmacists are authorized only for influenza, pneumococcal, and zoster immunizations. Some states, such as West Virginia and Wyoming, have a less restricted list of approved vaccines identified as appropriate for independent pharmacist administration, but they have age requirements. For other states in that group of 17, such as California, the scope of included vaccines and ages in the statewide authority is much broader.5

Further complicating matters, laws governing practice under the autonomous model have age restrictions limiting pharmacist-delivered immunizations. As an example, pharmacists in Alaska can provide immunizations to patients of any age, whereas pharmacists in Maryland may administer influenza vaccines to any patient 9 years or older, but a prescription is required in Maryland based on age for some other CDC-recommended vaccines.5 Despite the variety of state regulations on vaccine type and age restrictions, pharmacists who operate under the independent model of vaccine administration more efficiently serve a larger population than their counterparts who must follow the more restrictive models. Independent pharmacist models remove the time-consuming barrier of obtaining a physician prescription or practicing under a site-specific protocol.11 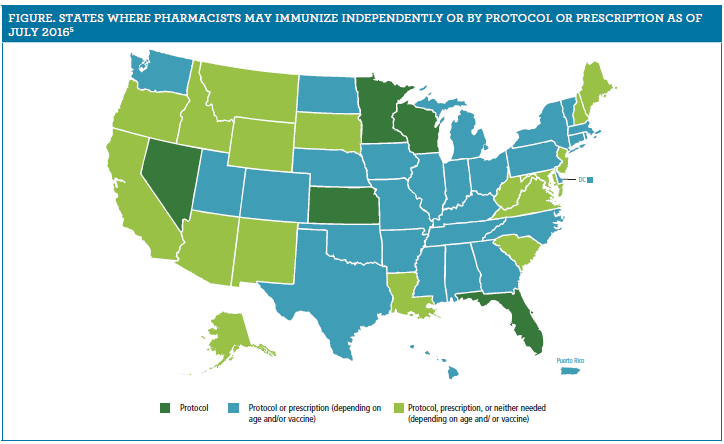 Restricted Models: Prescription and Protocol
In 28 states, DC, and Puerto Rico, pharmacists may provide immunizations only following prescriber-issued protocols or prescriptions, depending on the patient’s age and/or specific vaccine. Some of these states do not have age restrictions for pharmacist administration if prescriptions or protocols are used. California pharmacists follow a unique model with both independent and protocol provisions.5

What is perhaps the most restrictive model limits pharmacists to immunize solely through a prescriber-issued protocol; this model is implemented in 5 states (Florida, Kansas, Nevada, Minnesota, and Wisconsin).5 This model can significantly limit the ability of pharmacists to engage in the practice of immunization if they are unable to form a collaboration with a local physician. Additionally, pharmacists may need to turn patients away who have prescriptions but do not qualify for immunization under the written protocols or if a protocol hasn’t been established. However, because the effectiveness of pharmacist-provided immunizations has been definitively established, it is likely that the scope of pharmacist-based vaccine delivery will expand in these more restrictive jurisdictions soon. Kansas, for instance, was ranked 44th in adolescent immunization rates for 2016, so state lawmakers have started a discussion regarding legislation to allow pharmacists to offer any vaccination to patients 6 years or older without limiting them to operate under site-specific protocols.12,13

Other Requirements
In addition to the state-to-state variability regarding which vaccines pharmacists may provide, age restrictions, and which practice model should be followed, pharmacists in different states are also faced with different reporting requirements.14 In 2014, the American Immunization Registry Association (AIRA) conducted a national survey to evaluate pharmacy reporting of immunizations to statewide registries. Immunization Information Systems (IIS) are intended to serve as a centralized location for patient immunization records. Pharmacies are required to report administered vaccines to the IIS in many states and territories; submission of immunization data may require patient consent, depending on judicial regulations. Of the 45 states, cities, and territories that responded to the AIRA survey, 42 (93%) had vaccination services provided by pharmacies and an IIS program. Mandatory reporting laws required pharmacies to report immunizations to IIS in 22 (49%) of the AIRA survey response areas; 36 (80%) had pharmacies already reporting immunization data. Despite the positive demonstration of IIS utilization by pharmacies in areas without required or mandated reporting, the AIRA survey identified challenges preventing pharmacies from reporting to IIS. State variations in the IIS specifications, mandated reporting, and consent requirements were found to be major challenges; state variations require a substantial amount of effort on behalf of frequently understaffed pharmacies, leading to underutilization of this important tool to enhance immunization rates.15

Another discrepancy among state laws governing vaccination authority concerns the role of student pharmacists or interns. Forty-seven states and DC allow student pharmacists who have completed a certificate training program to provide vaccinations under the supervision of an appropriately credentialed pharmacist. These student pharmacists are subject to operating under the same laws as their supervising pharmacist in their respective states. As of July 2016, New Hampshire, New Jersey, New York, and Puerto Rico do not permit vaccination administration by student pharmacists.5 To meet requirements of the Accreditation Council on Pharmacy Education and American Association of Colleges of Pharmacy/Center for the Advancement of Pharmaceutical Education outcomes, all doctor of pharmacy programs have offered immunization training to students since 2007.16,17 Still, even with implementation of nearly standard training for student pharmacists across the country, there remain substantial variations in their ability to apply and practice immunization skills for the full range of vaccines and patient age groups.

Conclusions
All pharmacists graduating in the last decade have received standardized training on immunizations. Federal entities such as the CDC and the National Vaccine Advisory Committee endorse the use of pharmacists to enhance immunization rates. Many states grant pharmacists full independent practice, yet vast state-to-state differences still exist in laws that allow pharmacists to vaccinate. As pharmacists continue to demonstrate their expertise and utility in protecting the public from vaccine-preventable diseases, more states and territories will move to expand the scope of practice in this area. With continued advocacy, someday pharmacists in every state will be able to fully participate in providing all vaccines to the patients they serve.
Sharon Xavioer, PharmD, is assistant professor, Department of Pharmacy Practice, Chapman University School of Pharmacy, Irvine, California.

16. Accreditation Council for Pharmacy Education (ACPE). Guidance for the accreditation standards and key elements for the professional program in pharmacy leading to the doctor of pharmacy degree. ACPE website. acpe-accredit.org/pdf/GuidanceforStandards2016FINAL.pdf. Published February 2, 2015. Accessed May 10, 2016.

34662
Authority and Scope of Vaccination: How States Differ
Immunization is considered 1 of the 10 greatest public health achievements of the 20th century.
/publications/supplementals/2017/ImmunizationSupplementJune2017/authority-and-scope-of-vaccination-how-states-differ