Managing Pain Over the Counter: A Role for Ibuprofen
2010-07-15 01:26:04
This article was prepared at the request of, and was funded by, Pfizer Consumer Healthcare 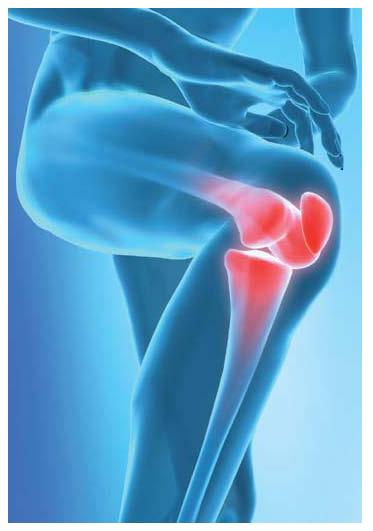 How often do you find yourself at the pharmacy staring at an overwhelming number of pain relievers? As you look down the aisle, you realize there are so many different brands. How will you find the one that works best for you? With so many over-the-counter (OTC) (ie, drugs that do not require a prescription) choices, it is not that easy to find the one that will take care of your aches and pains.

Lots of people turn to oral OTC pain relievers to help relieve pain. Pain is often associated with inflammation, which is an irritation of tissues that can also cause redness, swelling, and heat in the affected area. Conditions that can be treated using OTC pain relievers include:

• Minor arthritis pain and other joint pain. Approximately 46 million adults in the United States have been told they have some form of arthritis. People with arthritis may complain of pain, stiffness, and swelling in their joints—typically in the hands, knees, and hips. Although a doctor should manage arthritis treatment, OTC pain relievers can help with minor arthritis pain and other joint pain.
• Pain from injury. In 2006, nearly 15% of visits to the emergency department or doctors’ offices in the United States were related to musculoskeletal injuries (ie, injuries related to muscles, bones, and joints). Common types include strains, sprains, or muscle bruises, and they can be caused by falling down, playing sports, or from making repetitive movements. Symptoms include pain, stiffness, redness, warmth, and/or swelling near a joint or muscle group.
• Other causes. Pain due to headache, muscular aches, backache, toothache, menstrual cramps, and the common cold or flu.

What OTC Pain Relievers Are Available?

Although there are many different brands available, there are only 2 different types of OTC pain relievers— nonsteroidal anti-inflammatory drugs (NSAIDs) and acetaminophen. For all of these products, it is important to read the label and use as directed.

NSAIDs are medications that can reduce pain and fever. NSAIDs work by limiting the production of certain substances in your body called prostaglandins, which are released when your tissues are injured, resulting in inflammation and pain. There are several NSAIDs available by prescription, but only 3 are available OTC: ibuprofen, naproxen sodium, and aspirin. While prescription NSAIDs are used to treat more severe conditions, OTC NSAIDs such as ibuprofen are used to relieve minor pain due to headache, toothache, backache, menstrual cramps, muscle aches, and the common cold, and pain associated with minor arthritis and other joint pain. They are also used to temporarily reduce fever.

Ibuprofen (the active ingredient in several products including Advil) is an NSAID that was first approved by the FDA for prescription use in 1974. It gained OTC status in 1984 with the launch of Advil. OTC doses of ibuprofen are both safe and effective for the treatment of pain and fever when used as directed. OTC ibuprofen is recommended for the temporary reduction of fever and relief of minor aches and pains associated with arthritis, headache, muscular aches, toothache, backache, the common cold, and menstrual cramps.

Acetaminophen (the active ingredient in Tylenol and other products) is another pain reliever that can be obtained OTC; it has been available since 1950. Acetaminophen is recommended for the temporary reduction of fever and relief of minor aches and pains associated with arthritis, headache, muscular aches, toothache, backache, the common cold, and menstrual cramps.

OTC products containing ibuprofen, such as Advil, are a reasonable choice when considering options for self-care of acute pain. When choosing a pain reliever, keep in mind the symptoms you want to treat, other drugs you may be taking, and your general health. Ask your doctor or pharmacist if you have any questions, and always be sure to tell your doctor or pharmacist what OTC medications, vitamins, or dietary supplements you are taking. 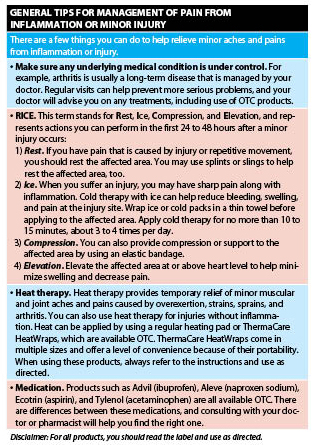 1764
Managing Pain Over the Counter: A Role for Ibuprofen
OTC products containing ibuprofen, such as Advil, are a reasonable choice when considering options for self-care of acute pain.
/publications/issue/2010/July2010/PEPainIbuprofen-0710