Pharmacists Beat Physicians on Honesty, Ethics
2015-12-21 10:54:00
Meghan Ross, Senior Associate Editor
Pharmacists continue to rank among the most honest and ethical professionals in America, according to Gallup’s latest poll on the topic.

Just like last year, pharmacists were ranked as the No. 2 most honest and ethical professionals, following nurses who once again nabbed the top spot.

One difference in this year’s poll results compared to last year’s was that pharmacists ranked slightly higher than physicians. 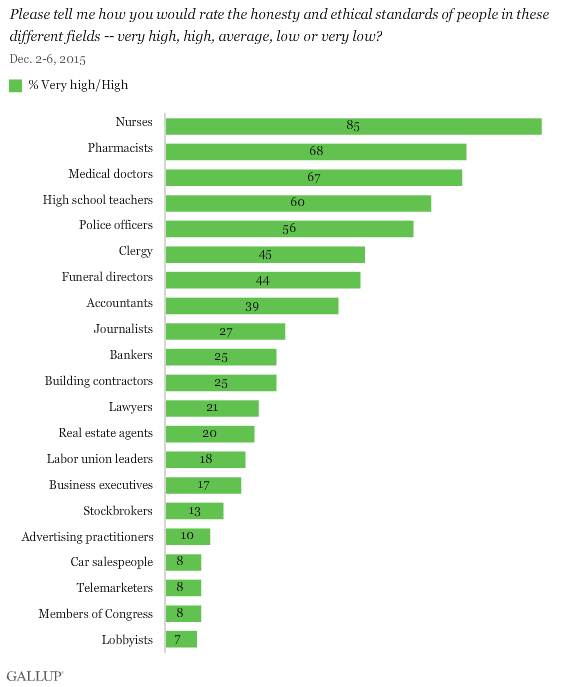 Pharmacists’ scores improved from last year’s poll, as well. In 2014, 65% of adults ranked pharmacists and physicians as having very high or high standards of ethics and honesty.

Only 5% of adults said pharmacists had low or very low ethical standards, while 27% said they had average standards.

CEO B. Douglas Hoey, RPh, MBA, issued a statement on behalf of the National Community Pharmacists Association (NCPA) complimenting pharmacists on their achievement.

“Congratulations to America’s community pharmacists for their rating as the second most trusted US professional according to the latest Gallup survey,” Hoey wrote. “The expertise, accessibility, and care that pharmacists provide all contribute to this impressive standing in the public’s view.”

Members of Congress, lobbyists, and telemarketers continue to remain at the bottom of the list, while nurses, pharmacists, medical doctors, and high school teachers have traditionally stayed at the top.

In the middle range this year were clergy members, funeral directors, and accountants who ranged in honesty and ethical standards between 45% and 39%.

Nurses have been named the most trusted professionals every year since 1999 except for 2001, when firefighters topped the list at 90%.

This year, 56% of adults said police officers had very high or high honesty and ethical standards, which is up from 48% in 2014.

The Gallup poll involved a random study population of 824 adults. The interviews were conducted over the phone between December 2, 2015, and December 6, 2015.

Share:
18259
Pharmacists Beat Physicians on Honesty, Ethics
Pharmacists continue to rank among the most honest and ethical professionals in America, according to Gallup's latest poll on the topic.
/news/pharmacists-beat-physicians-on-honesty-ethics