Pharmacist Tests Harmful Effects of Soda
2015-09-04 05:26:00
Meghan Ross, Associate Editor
Inspired by a viral infographic of the harmful effects of drinking a single can of soda, an expert from South University Pharmacy School put some of its claims to the test.

Former pharmacist Niraj Naik’s infographic asserted that blood sugar would spike after 20 minutes, and blood pressure would rise after 40 minutes. It also stated that after an hour, the soda drinker would become irritable and sluggish while the soda’s diuretic properties cause the body to purge valuable nutrients. 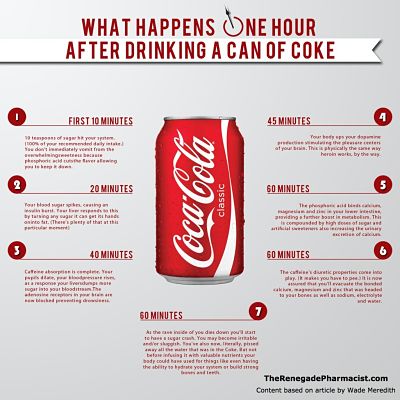 News station WSAV volunteered 1 of its anchors, Ben Senger, to drink a 12-ounce can of soda and see how his body reacted 20 and 40 minutes later.

Senger’s blood sugar level spiked from a normal level to a high level 20 minutes after consuming the soda, according to WSAV.

“Your insulin will compensate for that so it won’t spike too high, but for a patient with diabetes who already has problems with their body regulating their sugar, it could mean they get a more significant spike,” Dr. Jones told WSAV.

After 40 minutes, Dr. Jones took Senger’s blood pressure and saw no significant rise, which she had expected.

“In a normal person, 1 soft drink should not impact them that much,” Dr. Jones told WSAV. “…The key to all of this, like anything else, is moderation.”

The US Centers for Disease Control and Prevention (CDC) estimates that around 1 in 4 adults drink “sugar-sweetened beverages” such as soda or fruit drinks at least once a day.

Daily consumption of these products is linked with obesity and chronic conditions such as diabetes and cardiovascular disease, the CDC warns.

Those who drink 1 to 2 sugary drinks a day have a 26% greater risk of developing type 2 diabetes than those who do not often drink soda, fruit juice, iced tea, and energy and vitamin water drinks, according to a 2010 study published in Diabetes Care.

17018
Pharmacist Tests Harmful Effects of Soda
Inspired by a viral infographic of the harmful effects of drinking a single can of soda, an expert from South University Pharmacy School put some of its claims to the test.
/news/pharmacist-tests-harmful-effects-of-soda