Here are the key points and rationale behind the lower blood pressure (BP) target.

The AHA/ACC/ASH guidelines now recommend a target BP <130/80 mm Hg in some patients with CAD. However, lowering diastolic blood pressure (DBP) <60 mm Hg is not recommended in patients with CAD, especially those aged older than 60 years, due to the potential for increasing cardiovascular (CV) risk.

The lower target may be appropriate for patients with a history of myocardial infarction, stroke, or transient ischemic attack, as well as for patients with certain risk equivalents for CAD, such as:
Key points and rationale

1. There is a continuous increase in CV risk with increasing BP levels.

Younger patients still have elastic arteries, whereas the arteries of older patients have become stiffer and harder. When the heart beats in a younger individual, a wave of pressure from the aortic valve washes through the body and then slowly reflects back to the heart. Importantly, that pressure wave travels back to the aortic value when it has already closed, raising diastolic pressure.

In older patients, however, the arteries are too stiff for the pressure wave to return to the aortic valve before it closes. Rather, the blood pushes back on the aortic valve almost immediately when it is still open. As a result, the next heartbeat has higher pressure, and hypertension in older patients with stiffer arteries primarily raises SBP, rather than DBP as in younger patients.1,3-8

3. There is a long-running J-curve debate regarding the optimal BP level to achieve in different groups of patients.

As a result of intense debate, the recommendation was later changed to a higher target BP level, but the option to use a lower level in appropriate patients has never been disallowed.1,9

However, this debate has led to the current situation in medicine in which BP targets for patients with establish CAD or known CAD risk factors have not been firmly established. According to the ACC/AHA/ASH panel, one of the key factors in the debate is controversy over the J-curve phenomenon, in which CV risk can increase if BP levels are lowered excessively.1

Specifically, if DBP levels are too low, the heart has less available oxygen during the rest phase of the heartbeat to initiate the next heartbeat, increasing cardiac workload, leading to cardiac ischemia, and increasing the risk of cardiac events. In other words, at some point, DBP is so low that the heart stops having to do less work and starts having to do more work (Figure 1).1 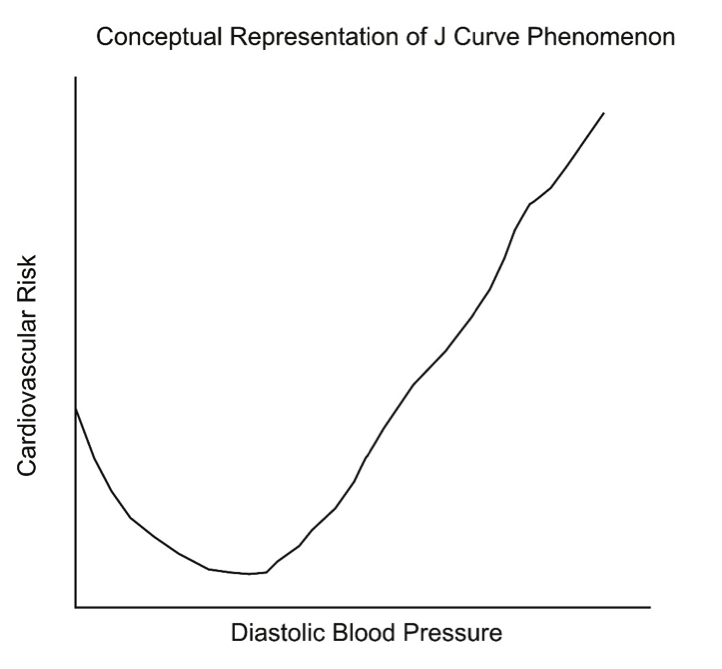 Some scientists believe concerns over low DBP may be overblown. For instance, in dogs, researchers lowered DBPs to the human equivalent of 30 mm Hg, and it did not reduce the ability of heart tissue to contract.1,10-12

Despite this animal data, the panel recognized lowering DBP could have a harmful effect at some point, particularly in patients with CAD. The danger of lowering DBP below a certain level is thought to be the physiologic process behind the J-curve phenomenon. However, finding the inflection point of the J-curve—the optimal BP target—is a challenge because it varies among populations, and clinical trials have not yet found this ideal level in all populations.1

In addition, different studies’ meta-analyses have identified different inflection points for the J-curve, and some studies have even questioned whether the phenomenon exists.13 These investigators hypothesize the J curve phenomenon may simply be a statistical artifact that appears because patients with low BP levels (eg, <120/70 mm Hg) also have more comorbidities, such as diabetes mellitus, heart failure, and cancer.14 Adjusting for these potential confounders, however, other investigators estimated CV risk may not increase until DBP is <50 mm Hg. And yet, still other data suggest the J-curve inflection point may be at a BP level as high as 146/81 mm Hg in patients with CAD.15

Despite these conflicting data, the ACC/AHA/ASH guidelines cited a subanalysis of ACCORD in which a DBP between 60 mm Hg and 65 mm Hg did not increase the risk of coronary events. As a result, the guidelines recommend against lowering DBP below 60 mm Hg, especially in patients aged older than 60 years.1,16,17

Having defined the lower limit of BP reduction, the guidelines recommend a new target BP of <130/80 mm Hg in some patients with CAD. This lower target may be especially relevant for patients with a history of myocardial infarction, stroke, transient ischemic attack, or certain risk equivalents for CAD. These CAD risk equivalents include carotid artery disease, peripheral artery disease, and abdominal aortic aneurysm.1

Understanding that lower target BP levels are appropriate in some patients is an important part of understanding the nuances of hypertension management. Although the majority of patients may be managed with the general approach recommended by the JNC 8 guidelines, treatment targets must ultimately be determined by patient-specific factors. These latest guidelines clarify those factors in 5 specific medical conditions and emphasize the importance of individualization of BP goals, particularly in patients with very high CV risk.