Virtually Observed Therapy May Track Medication Adherence
2018-05-09 17:00:00
Timothy Aungst, PharmD
How do you make sure a patient takes their medication? The topic of medication adherence, for me, boils down to tracking, and promotion of adherence for patients. We have methods developed to promote adherence, whether through packaging (e.g., strip or blister packs), reminders (e.g., text messages, alarms, mobile apps), and other interventions, such as counseling. Nonetheless, verifying if a patient is taking such therapy is tough.
Traditionally, this has done by asking patients directly, and even using different scales of assessment to verify adherence. But, as some research has shown, patients often rate their adherence higher than what it actually is. Other items include conducting pill counts, which can be tough when patients dump medications into containers, and may fudge the number of tablets. Some companies keep track via a Medication Possession Ratio, which essentially monitors how often a patient refills a medication. Ideally, if they are refilling on time, they should have no gaps in therapy, and if they are refilling late, ergo, they are not taking it correctly. This can be problematic, especially if a patient pays cash for a medication (thus not collected on record—for instance, a $4 generic list drug), or they may have a set refill or mail order product, and thus will be delivered drugs no matter if they have extra.
Thus, the conundrum is what to do. We have some new novel technology, such as sensors that can detect the use of inhaler use, and injectable medications (e.g., insulin), but oral medications have posed problematic. Some companies, like Proteus Digital Health, market bioingestible sensors that can tell when a drug is ingested, but rely on ancillary devices worn by the patient to detect this.1 Recently, Otsuka's Abilify MYCITE was approved by the FDA for this instance, and other drugs will likely enter the market with similar sensors.2 The issue remains what to do about other drugs, especially ones that are not costly and adding sensors would dramatically increase their prices.
In that case, there has been an exploration of the virtual observed therapy market of using an app on a smartphone to record when a patient takes their medication. Mimicking what is done with directly observed therapy for conditions like Tuberculosis or methadone clinics, the phone replaces the medical professional observing a patient taking medication. Two companies are pursuing this to a vast extent:
AiCure3—Tackling clinical trials measurement of adherence, and some population health issues, the technology uses exciting algorithms, and some AI technology for facial recognization to determine if a patient takes, and swallows the medication. It is rather interesting, especially given that the tech has been hyped to track if a patient really does swallow the drug, instead of parking it under the tongue or cheeks. The platform provides guidance, and alerts to help patients remember to take their medication.
Emocha Mobile Health4—Similar to AiCure's platform, we again have a technology that observes a patient taking medication via the camera, to track if they swallowed it. I am not sure if the tech is as in-depth to the algorithms that AiCure is using, but it is a potent VOT (virtually observed therapy) program as well.
Now, these platforms are quite different from other companies, like Wellth, that have a patient take a picture of their medication before they take it. Rather, those that track this data on the backend can bring up videos of patients, and watch the recordings to double check (at their choosing) if the patient took their medication. All in all, VOT offers a viable mechanism to track medications being taken orally, without the use of sensors.

The issue is that the use of this technology for everyday use may be encumbering for patients with a high medication load. Take for instance, if someone takes medications 3 times a day, and has more than 10 medications, taking them 1 at a time and recording the process will probably be a barrier. That is why Emocha and AiCure are targeting the clinical trial market, because those generally focus on 1 drug.
The results from Emocha and AiCure have thus far proven promising. Take for instance a trial from AiCure to monitor DOAC therapy in patients with a previous stroke.5 In a cohort study of 28 patients, the platform observed 97.2% (n=15) adherence in the intervention group using AiCure and 90.6% (n=13) adherence in the control group based on pill count. 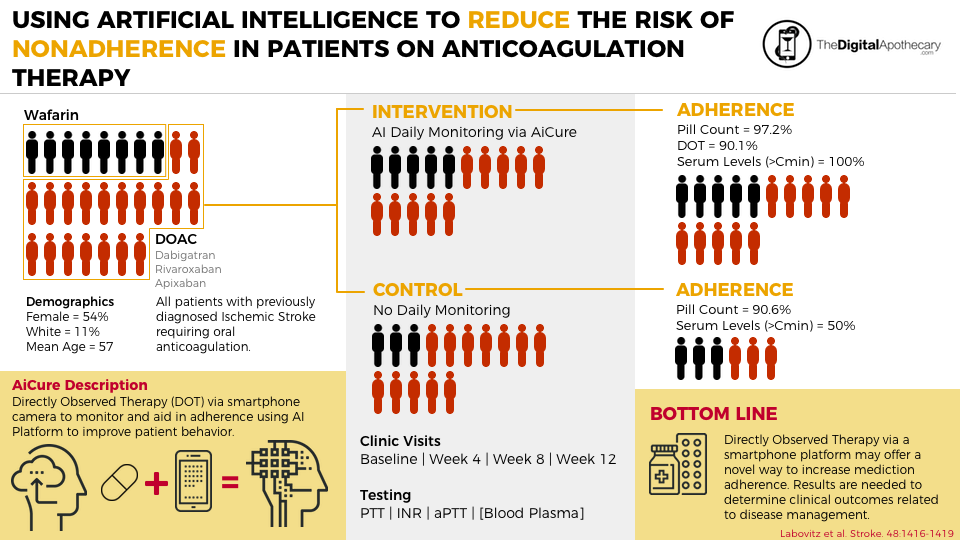 Now, the interesting thing here is, based upon blood concentrations of drugs, the intervention group was 100% therapeutic versus 50% in the control group. So we reach an interesting outcome: patients have what appears to be high adherence based on pill counts, but a big difference in therapeutic outcomes—which goes back to what I spoke about earlier has been problematic when using pill counts.

In a similar vein, Emocha recently released results of a study in patients with TB.6 In this case, using their platform, they conducted a prospective study in 28 patients comparing VOT to DOT. In essence, their results demonstrated a similar measurable adherence rate between both groups. The value here was the fact that VOT could monitor all days of therapy (including weekends and holidays) that aren't always possible with DOT. This helps cut overhead and frees up time for clinicians for other duties.
Overall, acceptance rates of this technology in clinical trials by patients and clinicians have been high. I haven't seen any data using multiple pills in a study, so my concerns from earlier remain unanswered, but I am sure something will be released in the future to confirm or dissuade those thoughts. I would say VOT is a viable solution for the near-term, at least until sensor based medications become more widely practical, based on cost, and technological limitations in the future.
References
36435
Virtually Observed Therapy May Track Medication Adherence
Multiple companies are looking into using smartphones to track patients taking their medications. Who is involved, and what may happen in the future?
/contributor/timothy-aungst-pharmd/2018/05/virtually-observed-therapy-may-track-medication-adherence