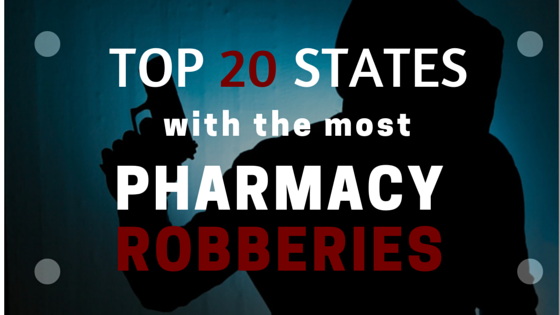 According to a report by Pharmacy Times, 829 chain and retail pharmacies in the United States reported a robbery in 2014. Unfortunately, pharmacy robberies reported in the first 5 months of 2015 threaten to outpace these statistics.

Just in this 5-month period, 382 US pharmacies reported armed robberies, according to data from the Drug Enforcement Administration. Here is a breakdown of the top 20 states for pharmacy robberies:

Indiana has more than twice the number of pharmacy robberies as the next highest-ranked state, and it is on pace to experience a marked increase in 2015 from the 78 robberies it reported in 2014.

These statistics do not include thefts by pharmacy employees, which is another growing problem in the industry.

Although a number of factors have contributed to the uptick in pharmacy robberies, many experts and industry professionals agree that the increase in prescription drug abuse and addiction across the United States is creating a demand for prescription medications that are obtained and resold illegally.

Typically, DEA experts say, robbers are after oxycodone, methadone, Valium, Percocet, Xanax, and other opiates. Many pharmacy robberies last only a few minutes and involve robbers handing a note to a pharmacy employee, giving them plenty of time to flee the scene before law enforcement officials can respond to calls for help.

There are many things pharmacists can do to keep themselves and their co-workers safe in the event of a robbery, experts say. But, the increasing threat of robberies is unnerving, adding pressure to an already stressful job.

With the frightening increase in pharmacy robberies, all pharmacy employees should be routinely trained on how to properly respond. Because pharmacy robberies are no longer considered isolated incidents confined to certain geographic areas, safety and security are the new names of the game.
16394
Top 20 States for Pharmacy Robberies
Here is a breakdown of the top 20 states for pharmacy robberies.
/contributor/alex-barker-pharmd/2015/07/top-20-states-for-pharmacy-robberies