Insurance and Retail Pharmacy: A Look at the Digital Landscape

A look at how the digital landscape could change after a merger between an insurer and giant retail pharmacy company is finalized.

A few years ago, I wrote about how I envisioned that pharmacies could drastically change in our communities. My thought was that they could combine the growing capacity of digital health technology and personalized medicine features, giving the pharmacist an integrative role in which to provide patient care.1 These ideas included:

1. Improving the pharmacy dispensing process and inventory management. There are a few things in this area that can be improved, namely, the whole process of receiving a prescription, filling it, and verifying it by the pharmacist. Obviously, these are not the only considerations to consider. Often, patients and other health practitioners forget that the pharmacy is more than a place to "count, lick, stick, and pour" but is a veritable operation in and of itself, including billing for prescriptions, data management, drug acquisition, and inventory management. The pharmacy has many laws, and they vary from state to state. That said, some areas may be addressed from some recent advancements. For instance, filling medications off-site has shown some success. For instance, Wegmans has done a good job filling medications at outside facilities and then delivering them to its pharmacies for patient pickup, which reduces the workload of the pharmacy staff to concentrate on immediate fills. Other advances I have seen include PillPack, which has brought "oldie but goodie" pharmacy automation technology to the mass market by using multi-drug dispensing systems for mail order. Automation is a big solution, and it is slowly getting better. However, its application always seems to be a barrier. Sometimes, I think the pharmacy world could learn a lot from other industries that must deal with mass inventory management, such as Amazon. Given the recent news about Amazon being interested in the health care sector, I wonder what technology or inventory management processes it would bring. The pharmacy industry needs to turn an eye to others for possible new disruptive technologies to change up the way it delivers medications to patients.

2. Expanding pharmacists' roles and duties. Sometimes, I think modern pharmacists are the most overeducated individuals for their positions. We have been fighting for years to expand our clinical skills and services to patients and be reimbursed for such services. Provider status is slowly coming to the profession, and though it will take time, we will eventually get there. That being the case, the space to function is drastically compacted in the pharmacy to engage in such roles. Look at immunizations. We are doing it in the aisles behind a screen. I would thoroughly support the development of suitable space for pharmacists to engage patients. This area would be a better environment to provide patient counseling, point-of-care testing, various other services. I think that if pharmacists want to be seen as providers, the environment should suit such roles.

3. Engaging patient and expanding services. I look at the 15 or more minutes the patient waits at the pharmacy as wasted time for patient care and engagement. Yes, they can shop, and I think that should be encouraged for business purposes, but often a patient playing on a smartphone could be better engaged. I propose a redevelopment of the waiting room for patients, where we give them something to do that could affect their health. Finally, I think there are a lot of opportunities to leverage the role that digital health has been playing in patients' lives by directly supplying and using such devices in the pharmacy.

I admit, some of these elements are far-fetched and not quite there yet, but some new developments offer hope that this could potentially become a reality, especially given the recent news that Aetna and CVS are merging. A recent statement from Aetna Chief Executive Mark Bertolini emphasized that the local CVS pharmacy could play a significant role in the patient-centered medical home model and that the pharmacy could be like the Genius Bar in an Apple store, where patients could get help for their health.2 The fact that there is a potential vision for pharmacists to play a new role offers optimism.

Below is a graphic I put together, demonstrating how such new facets could play out in a community pharmacy. The key is that there will be a need for more pharmacists to perform specific roles, and if Aetna and CVS want to pilot them and make them a reality, that sparks high hopes for a potential reworking of what a pharmacist can do in the 21st century, moving beyond a focus on dispensing medications. 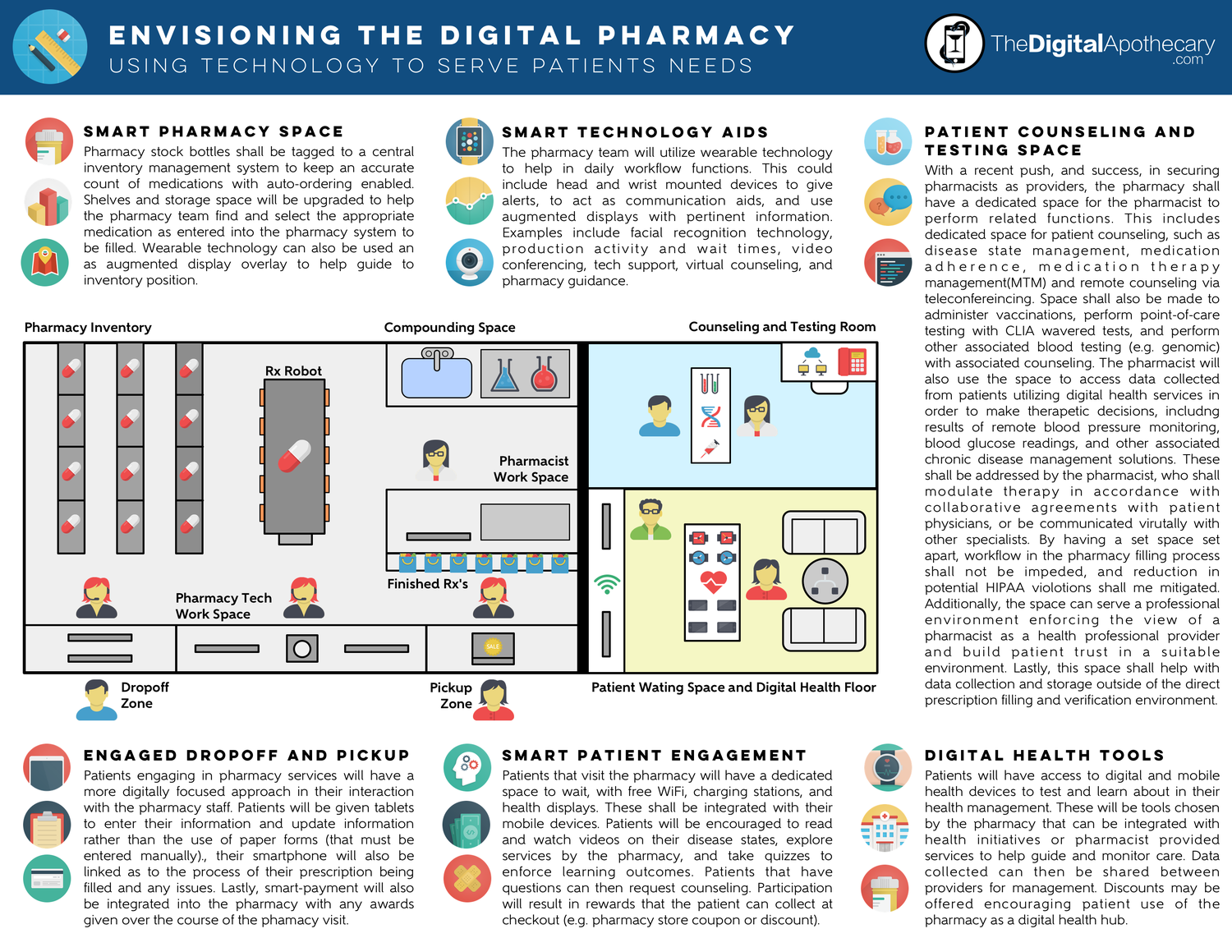