Keep a critical eye on whether precautions should be taken or a change in therapy is warranted.

Pharmacogenomics is a relatively new field in pharmacy practice that can advance the profession further as clinicians specialize in drug therapy. The FDA differentiates pharmacogenomics as “the study of variations of DNA and RNA characteristics as related to drug response” and pharmacogenetics as “the study of variations in DNA sequence as related to drug response.”1 However, in clinical practice, the 2 terms are used interchangeably.2

Pharmacogenomics aims to give clinicians the ability to bypass the trial-and-error phases of starting drug therapy and pinpoint the best drug choices for each patient at the time of therapy initiation. Some may argue that using pharmacogenomics testing may not be cost-effective or feasible.3,4 However, genetic variations are actually very common, with single-nucleotide polymorphisms (SNPs) accounting for the majority of variants.5 These genetic variants materialize into different alleles, which are already responsible for human differences such as eye color. SNPs occur in every 300 to 1000 bases in a person’s genome and result in more than 4 million to 5 million in total.5,6 The potential for pharmacogenomcis testing to target this vast pool of information with simple, 1-time tests cannot be ignored. The results of a study on a medication therapy management (MTM) service in a primary care setting incorporated a clinical decision support system and pharmacogenomics testing to assist in identifying medication-related problems and showed that 24.6% of the problems were druggene interactions, which is comparable to the 29% that were standard drug-drug interactions.7 The top drugs identified in these interactions were anticoagulants, antidepressants, β-blockers, opioids, proton pump inhibitors, and statins.7

A weakness of some standard drug interactions is the theoretical nature of said interactions. A post hoc analysis of an observational randomized trial of MTM sessions compared the outcomes of incorporating clinical decision support systems and pharmacogenomics test results into MTM and found that although the incorporation of these tools did not necessarily increase the number of drug therapy problems identified by pharmacists, the use of pharmacogenomics reports helped pharmacists determine more serious problems for which prescribers willingly accepted pharmacist recommendations.8 Thus, pharmacogenomics can be seen as additional supporting evidence for pharmacists to validate the drug-gene problems surfaced by the reports and recommendations that they are already making. A barrier to incorporating pharmacogenomics into health care is the knowledge of prescribers on what pharmacogenomics entails. It is reported that even though physicians do recognize the role of genetic variations in drug response, just 10% feel adequately knowledgeable about pharmacogenomics testings.8

The Clinical Pharmacogenetics Implementation Consortium (CPIC) creates guidelines based on critical review of literature and the translation of pharmacogenomic research to applicable clinical consideration and is the go-to reference for pharmacogenomics recommendations. The consortium develops its guidelines to be specifically incorporated into electronic health records and clinical decision support systems in which genetic results and appropriate clinical actions can be inputted seamlessly.9 CPIC guidelines have been circulated and endorsed by multiple organizations, such as the American Society of Health-System Pharmacists, the Agency for Healthcare Research and Quality—sponsored National Guideline Clearinghouse, and the National Institutes of Health (NIH).9

Most drug-gene interactions revolve around cytochrome P450 enzymes and consequences for drug metabolism. However, other drug-gene interactions are just as important, if not more so. Abacavir, a nucleoside reverse transcriptase inhibitor used for HIV treatment, is associated with an increased risk of hypersensitivity in patients with the HLA-B*57:01 allele.10 The HLA-B gene does not code for a metabolic enzyme but for a class 1 HLA molecule expressed on almost all cells. This variant is associated with a dysregulation of the immune system recognizing its own cells and can create an overt hypersensitivity reaction with abacavir.10 The online table is a compilation of different drug-gene interactions.10,13-15 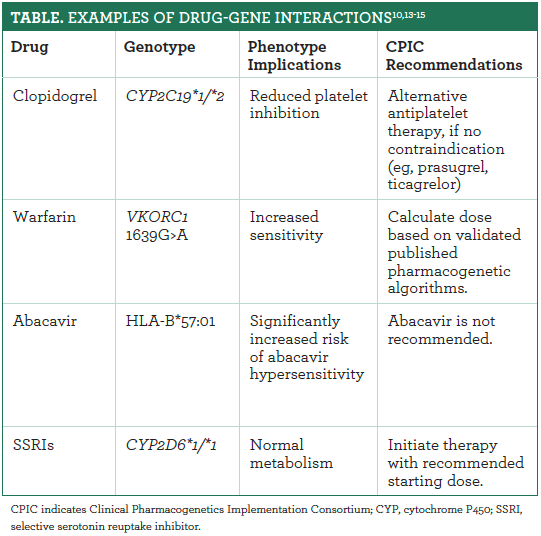 In terms of regulatory overview of implementing pharmacogenomics in practice, the FDA has to warn providers about “a clinically significant hazard as soon as there is reasonable evidence of a causal association with a drug” (Title 21 Code of Federal Regulations 201.57).11

The results of a semistructured interview study on patients receiving pharmacogenomics reports showed that patients wanted to know why certain medications may not work well but at the same time preferred laymen’s terms over medical jargon.16

Explaining drug-gene interactions can be as simple as telling a patient that a particular drug is not the best choice based on their body’s genetic makeup. In today’s world of endless OTC medication choices on top of prescription drugs, the notion of what “works” for patients and what “does not work” is already commonly held. Countless times, patients approach pharmacy counters and say that they prefer a particular brand or drug over another based on their own perceptions of efficacy. Sometimes this is because of obscure allergies to specific excipients added into drug formulations that can be very hard to pinpoint for patients. Pharmacogenetics, on the other hand, is 1 way to bridge the gap of patients’ perceptions that are not the result of overt adverse effects. This impression of more individualized medication care is already happening, and pharmacists can jump onto that stepping-stone to catapult personalized medicine even further. Doing so will lead to better patient care and better therapeutic outcomes. Importantly, emphasize to patients that the charm of pharmacogenetics testing for drug-gene interactions is that pharmacists can identify possible adverse events before they happen and individualize the drug therapy and dosage.

Critical strategies in explaining drug-gene interactions to patients include avoiding the word sensitivity, which can be misinterpreted to mean an allergy. If patients question whether an interaction is an allergy, pharmacists should differentiate allergies from drug interactions. Because many drug-gene interactions revolve around drug metabolism, pharmacists should explain that these are normal differences in processing drugs. This is where pharmacists can teach patients a bit more about their biology and how their body works using patient-friendly terminology. When patients understand the underlying reasons, they more easily accept recommendations instead of just taking everything at face value. Care should be taken not to mislead patients into thinking they have hepatic issues. Additionally, pharmacists should stress that these interactions are not because of mutations, which patients may interpret as carcinogenic or a diagnosis of cancer itself. Mutations are defined as DNA changes that occur in <1% of the population, whereas allelic variants such as SNPs occur in >1% of the general population.17 Thus, mutations are much rarer and fall under a different subset of genetics used in health care. Certain variants are more common in specific geographical locations, which can account for variant prevalence in family members. For example, the abacavir druggene interaction with the HLA-B*57:01 variant has the highest frequency in Southwest Asian populations.10

Pharmacists should gravitate toward more patient-friendly language typical of standard counseling sessions. In interviews with patients, they opined that complex terms, such as intermediate/normal/poor metabolizers, would make patients more likely to tune out information.16 Alternatives to describe metabolism to patients are break down and digestion. Overall, pharmacists should stress the individuality of pharmacogenetics interventions as a way to personalize medication therapy based on pharmacogenetics information, in addition to multiple patient-specific factors, such as age, diet, lifestyle, and medical history. Suggested patient-friendly terms from the Mayo Clinic to explain pharmacogenetic drug-gene interactions include best medication and right drug for you.18

Despite the advancement of modern medicine, in which clinicians are able to access a plethora of hidden information from a simple cheek swab, the importance of using clinical judgment is still paramount in practice. Even with regular drug interactions, a need exists for the critical, keen eye of a pharmacist who can tell whether a change in therapy or precaution is warranted. The core of druggene interactions is based on the likelihood of adverse events just as that of regular drug interactions is. In the end, the clinical presentation of patients is what makes the biggest difference in finding the best drug therapy to suit each patient’s needs. 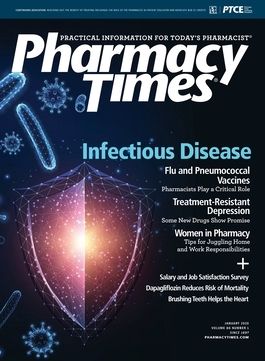