“The central problem in heart failure is not that patients are short of breath or retain fluid. The problem is that they die.”

“The central problem in heart failure is not that patients are short of breath or retain fluid. The problem is that they die.”1

These words by the late Dr. Arnold Katz resonate in this era of outcomes-focused health care, perhaps even more than when they were penned in 1993. In the early 1980s, the primary pharmacologic agents for combating heart failure (HF) with a reduced ejection fraction (HFrEF) were diuretics, digoxin, and hydralazine-isosorbide dinitrate. The field has come a long way since then, with the emergence of cornerstone therapies, such as angiotensin converting enzyme (ACE) inhibitors, beta-blockers, and mineralocorticoid receptor antagonists (MRAs).2

Two novel agents, recently approved by the FDA, with the potential to alter the landscape of HF management are the angiotensin receptor blocker/ neprilysin inhibitor (ARNI) combination of sacubitril/valsartan and the “funny” current inhibitor ivabradine. Both agents recently received endorsement in 2 major guideline revisions (table2,3).2,3 According to these guidelines, ARNI therapy has the potential to supplant ACE inhibitors as the preferred agent for neurohormonal modulation in HFrEF. These recommendations stem from the 20% relative reductions in both cardiovascular death and hospitalization for HF with ARNI therapy over enalapril in the PARADIGM-HF Study.4 Although the main PARADIGM-HF findings are impressive, recently published post hoc analyses have further bolstered the known benefits of ARNI therapy:

• The reduction in HF-related hospitalization was seen within 30 days of randomization to ARNI over enalapril.5 Patients randomized to ARNI also had fewer emergency department visits and were less likely to require outpatient intensification of medical therapy.

• Among cardiovascular deaths, both sudden cardiac death (HR, 0.80; P <.01) and death due to worsening HF (HR, 0.79; P = .034), were reduced by treatment with ARNI, compared with enalapril. Of note, the reductions in rates of sudden death were not influenced by the presence of an implantable cardioverter defibrillator (ICD), which is noteworthy, as the PARADIGM-HF trial has been criticized for low use of ICD therapy.7

• ARNI therapy is more expensive than enalapril when considering only direct costs of the medications. However, 2 recent papers have demonstrated acceptable cost effectiveness of ARNI therapy over enalapril, about $50,000 per quality-adjusted life-year.9,10 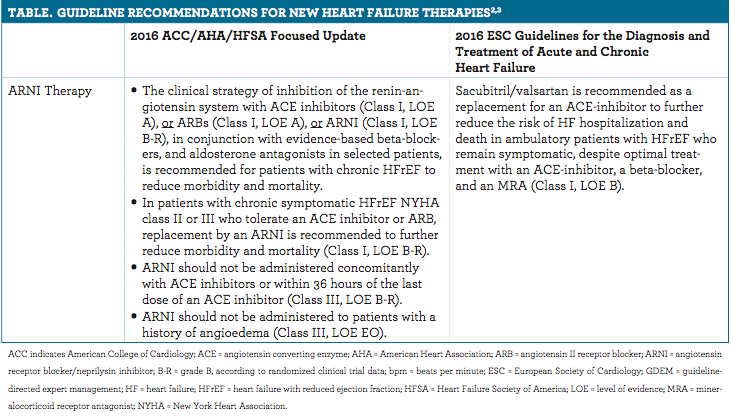 One important caveat is that this entire data set is from a single large clinical trial, in which patients of African descent and those with severe HF were not well represented. However, the potential benefits of ARNI are hard to ignore. Of 2,736,000 patients with HFrEF patients in the United States, 2,287,296 (84%) are projected to be candidates for ARNI therapy.11 Optimal use of ARNI therapy is empirically estimated to prevent 28,484 deaths per year in the United States alone.

Both the American and European guidelines provide a softer recommendation for ivabradine, which is appropriate, as this agent does not appear to reduce cardiovascular-related mortality.2,3 Ivabradine can, however, reduce HF-related hospitalization when added to standard medical therapy in those in normal sinus rhythm with HFrEF and a resting heart rate of 70 beats per minute or greater. Ivabradine has a relatively favorable adverse effect (AE) profile (bradycardia and visual disturbance were the main AEs seen in clinical trials). However, it carries an infrequent but potentially serious risk of new-onset atrial fibril- lation. Nevertheless, it is possible that ivabradine may establish a niche for use in patients with persistent symptoms, despite maximally tolerated doses of neurohormonal antagonists. This is especially true for patients who are unable to reach target doses of beta-blockers or who are completely intolerant of this class of medication.

Pharmacists, regardless of the practice setting, are charged with a duty to ensure that patients with HFrEF are prescribed contemporary, guideline-directed, mortality-reducing drug therapies. Pharmacists should consider all HFrEF patients who are taking an ACE inhibitor or an angiotensin II receptor blocker (ARB) as candidates for ARNI therapy. Pharmacists should offer counseling to patients about the risks and benefits of switching and engage providers as to how to do so safely (ie, ensure at least a 36-hour washout between agents). Pharmacists should also anticipate prior authorization for this therapy and be prepared to assist prescribers with ensuring a smooth process for the patient to obtain their medication. Also, pharmacists should monitor patients closely after switching, and transition back to ACE inhibitor or ARB therapy if intolerance, such as hypotension, develops.

We should also evaluate those not taking either an ACE inhibitor or ARB for ARNI therapy. Assess for possible contraindications (eg, hypotension, hyperkalemia, and severe renal impairment), and refer patients to their providers if none exist. Due to the risk of hypotension, always start at the lowest dose of ARNI therapy in these patients and monitor them closely for the emergence of angioedema. This is especially true for patients of African descent, who carry a higher risk for angioedema and who were not well represented in the PARADIGM trial.

In conclusion, the approvals of ARNI therapy and a funny current inhibitor afford clinicians new options to further reduce residual disease in patients with HFrEF. These medicines facilitate a movement away from older, less effective therapies, such as ACE inhibitors and digoxin. Pharmacists are key members of this shifting paradigm and must be aware of the recent evidence supporting these agents to best serve patients and health care colleagues.

3. Yancy CW, Jessup M, Bozkurt B, et al. 2016 ACC/AHA/HFSA focused update on new pharmacological therapy for heart failure: an update of the 2013 ACCF/AHA guideline for the management of heart failure: a report of the American College of Cardiology/American Heart Association Task Force on Clinical Practice Guidelines and the Heart Failure Society of America. J Am Coll Cardiol. 2016;68(13):1476-1488. doi: 10.1016/j.jacc.2016.05.011. 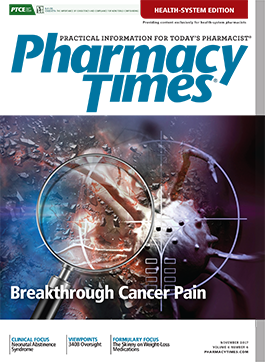