Diabetes is a complex, chronic disease requires a multifaceted approach to management that combines education and support, lifestyle modifications, and pharmacological treatment.

Diabetes afflicts more than 30 million Americans.1 There are also an estimated 84 million people in the United States who are pre-diabetic, with elevated blood glucose levels, and at risk for developing the disease.1 This complex, chronic disease requires a multifaceted approach to management that combines education and support, lifestyle modifications, and pharmacological treatment.

Type 1 diabetes (T1D), often called insulin-dependent or immune-mediated diabetes, is usually diagnosed in children or young adults but can develop at any age. About 5% to 10% of those affected by diabetes have T1D, which develops because of the cellular-mediated autoimmune destruction of the beta cells in the pancreas.2,4 Beta-cell destruction can be variable; it is rapid in some individuals and slow in others. Because of the severe insulin deficiency, exogenous insulin is required to control blood glucose and prevent diabetic ketoacidosis. Often, the first symptom of T1D is the presentation of ketoacidosis. In other patients, moderate fasting glucose may quickly change to ketoacidosis in the presence of infection or stress. Yet others can maintain enough residual beta-cell function to prevent ketoacidosis for years. Risk factors for T1D are not very clear, but genetic and environmental components appear to be involved.

Type 2 diabetes (T2D), or insulin-resistant diabetes, is the most common type, representing 90% to 95% of patients with diabetes. It is characterized by varying degrees of insulin resistance, impaired insulin secretion, and increased glucose production.2 Worsening beta-cell function with decreased insulin release is primarily responsible for disease progression in patients with T2D. Risk factors for developing T2D are being pre-diabetic, overweight, and physically inactive; having a family history of the disease, high blood pressure, or high cholesterol; or being older than 45. African Americans, Latinos, Native Americans, and Alaska Natives also have higher incidences of diabetes.1 Gestational diabetes, which affects 2% to 10% of pregnancies, and other diabetic syndromes make up the remaining cases.

Diabetes can be diagnosed by any of the following criteria in nonpregnant adults4 :

Management of diabetes is individualized and includes setting therapeutic goals, alleviating symptoms, achieving metabolic control, and preventing acute and long-term complications.2 This can be accomplished through patient education; lifestyle modifications, including diet and exercise; and pharmacologically through medication.

General therapeutic goals per American Diabetes Association (ADA) guidelines include fasting glucose of 80 to 130 mg/dL and postprandial glucose below 180 mg/dL.5 The ADA also recommends an A1C goal <7% for nonpregnant adults, with more stringent goals for selected patient populations if they can be reached without significant hypoglycemia or other adverse effects (AEs) of treatment.5

Treatment for patients with T1D usually centers around lifestyle modifications and insulin either via self-administration or pump, with results from the Diabetes Control and Complications Trial showing that intensive insulin therapy (3 or more injections per day) or continuous subcutaneous insulin infusion improved glycemic control and resulted in better outcomes.5

First-line therapy for T2D centers around lifestyle modifications. These interventions include controlling diet, getting adequate exercise (recommended 150 minutes moderate to intense aerobic activity per week), reducing weight, and other measures that contribute to the individual’s blood pressure, lipid, weight, and glucose goals.5 Although some patients are able to start with lifestyle modifications, the ADA and the European Association for the Study of Diabetes issued a consensus statement recommending that metformin therapy concurrent with lifestyle intervention should be initiated at the time of diagnosis. Individuals who just received their diagnosis, are symptomatic, or have an elevated glucose or A1C may start on insulin therapy.

If a target A1C is not reached within 3 months of lifestyle intervention and metformin, recommendations include adding a second oral or injectable agent, such as insulin, or switching to insulin.6 For patients close to their A1C goals, a short-acting sulfonylurea (eg, glipizide) is preferred, as it is less likely to cause hypoglycemia than the longer-acting agents, especially in older patients. Insulin is the agent of choice when the target A1C has not been achieved (>8.5%) or when there are symptoms of hyperglycemia.

An alternative for patients not reaching their therapeutic goals with metformin is the addition of repaglinide, especially if there are contraindications to sulfonylureas or a patient is resistant to starting insulin. Repaglinide is also principally metabolized in the liver and can safely be used in patients with kidney disease.7 A glucagon-like peptide-1 receptor agonist (GLP-1 RA) may also be an appropriate alternative, especially if the A1C level is close to target, weight loss is a consideration, and cost is not a barrier. The GLP-1 RA, liraglutide, has shown positive outcomes as a second drug added to metformin in patients with a prior history of myocardial infarction or stroke.7 Empagliflozin may also be selected in patients with cardiovascular disease. Thiazolidinediones are not recommended as first- line agents because of their AE profile, but they may be options in settings where patients are at very high risk for hypoglycemia or have a contraindication to sulfonylureas.

In patients who do not achieve their target A1C with metformin plus a sulfonylurea or basal insulin, starting or intensifying insulin therapy is recommended. An alternative option is to take 2 oral agents and a GLP-1 RA, especially if a patient is close to their glycemic goal or prefers not to start insulin. Patients who are not well controlled on 2 oral agents may benefit from switching to insulin, rather than adding a third agent, as this has shown to be a lower-cost alternative and have fewer AEs.6

The ADA has developed a detailed algorithm for the initiation of insulin in patients with T2D. An intense regimen is associated with better glycemic control than either an oral drug or basal insulin regimen. However, many patients can be resistant to starting insulin and noncompliance may be an issue.

Other medications that can be added include alpha-glucosidase inhibitors, which mainly lower glucose concentrations after meals. Disadvantages of these agents are thrice-daily dosing, expense, and gastrointestinal AEs. Pramlintide also may offer a modest improvement in A1C values, as it works as a synthetic analog of human amylin and is approved in patients taking insulin. Dipeptidyl peptidase-4 inhibitors have shown modest benefits in A1C reduction. They are not considered as initial therapy in most patients with diabetes but can be used in those with contraindications to metformin, sulfonylureas, or thiazolidinediones. Sodium/glucose cotransporter 2 inhibitors are relatively weak glucose-lowering agents that promote the renal excretion of glucose and reabsorption of the filtered glucose load. They are not considered first-line therapies but can be used as add-on agents in patients who have failed therapy with lifestyle intervention and metformin. Long-term benefits and risks of choosing one agent or regimen over another are largely unknown because of a lack of head-to-head comparison trials with outcomes data.

Ninety percent of people with pre-diabetes do not know they have it, yet they are at a higher risk for developing diabetes and having high blood pressure or a stroke.1 Uncontrolled diabetes can lead to micro- and macrovascular complications that significantly contribute to morbidity and mortality.

Screening; lifestyle modifications, such as with diet, exercise, and weight loss; and medication education and initiation are all important facets of diabetes that pharmacists can affect. Because of their accessibility, knowledge, and training, pharmacists are perfectly positioned to be a primary resource and means of support for patients with diabetes.

Joanna Lewis, PharmD, MBA, is a clinical pharmacist who is passionate about medication safety, clinical quality, leadership development, and regulatory affairs. She received her pharmacy degree from the Medical University of South Carolina and is an active member of the American Society of Health-System Pharmacists. She has worked in a variety of practice settings, most recently as a coordinator at Duke University in Durham, North Carolina. 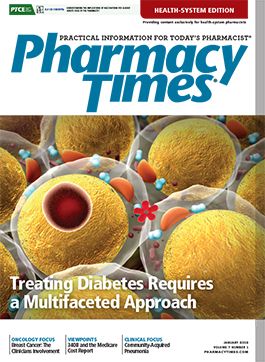 Breast Cancer: the Clinician's Involvement
Urinary Tract Infections: Opportunities for Clinical and Stewardship Pharmacists
Key Points to Consider From USP
340B and the Medicare Cost Report
Treating Diabetes Requires a Multifaceted Approach
Pharmacists' Role in the Management of Perioperative Analgesia
Community-Acquired Pneumonia
Understanding the Implications of Vaccinations for Elderly Adults: Role of the Pharmacist
Chicken Soup for the Patient's Soul...and Yours, Too
A Resolution to Beat Cancer
Related Videos
Related Content