Over the past 30 years, health plans have changed from primarily conventional health care coverage to alternatives such as health maintenance organizations and, most recently, high deductible health plans.

Over the past 30 years, health plans have changed from primarily conventional health care coverage to alternatives such as health maintenance organizations (HMOs) and, most recently, high deductible health plans (HDHPs). Choosing the right plan for you and your family can be very confusing. I’d like to walk through the similarities and differences in these plans and examine the prevalence of each as seen over the past 3 decades.

As a pharmacist, your insight has a direct effect on patient outcomes. Help drive medicine forward with your opinions. Participate in a quick survey of OTC products for a chance to win a $1,000 Visa gift card. Vote now by clicking here: https://hraresearchnetwork.com/wix/p6499706.aspx?hPTsource=5

Also known as a traditional insurance plan, conventional insurance coverage operates on a fee-for-service (FFS) structure. It provides basic coverage for doctor visits, hospitalization, surgery, and other medical expenses in an 80/20 split. The insurance covers 80% of the bill while the patient is responsible for the remainder.

Deductibles, the amount you are responsible to pay before insurance begins to pay, are usually in the range of $250 for an individual but can be as high as $10,000. The higher the deductible, the lower the premium.

Most plans include an annual maximum out-of-pocket amount; however, they also have a lifetime cap. In other words, once your bills reach a certain amount—usually $1 million or higher&mdash;the insurance company just won’t pay anymore.

These plans are said to focus on treating health issues rather than preventing them, therefore, they often do not cover “well” visits or annual physicals.

HMOs provide health insurance coverage for a monthly or annual fee. An HMO limits member coverage to medical care provided through a network of physicians and other health care providers who are under contract to the HMO. These contracts allow for premiums to be lower than for conventional health insurance because providers have the advantage of having patients directed to them.

In addition to low premiums, there are typically low or zero deductibles with an HMO. Instead, the organization charges a co-pay for each office visit, test, or prescription. Co-pays in HMOs are typically low, for example $5 to $20, per service.

Out-of-pocket expenses are usually minimal, which makes HMO plans affordable for families and employers. HMOs require a primary care physician (PCP) to manage care, who are considered “gatekeepers” and must provide a referral before you can see a specialist.

They typically have more expensive monthly rates than other types of health plans due to the freedom to see both in- and out-of-network doctors.

A POS plan requires individuals to choose an in-network PCP and get referrals from that physician if they want to see a specialist. They also provide coverage for out-of-network services; however, you will have to pay more than if you used in-network services.

POS plans require the policyholder to make co-payments, but in-network co-payments are often just $10 to $25 per appointment. They also do not have deductibles for in-network services.

POS plans often cost less than other policies but savings may be limited to visits with in-network providers.

An HDHP is a health insurance plan with a high minimum deductible for medical expenses. Once an individual has paid that portion of a claim, the insurance company will cover the other portion as specified in the contract. An HDHP usually has a higher annual deductible than a typical health plan, and its minimum deductible varies by year.

The higher deductible also lowers insurance premiums, making health coverage more affordable. HDHPs have an annual catastrophic limit on out-of-pocket expenses for covered services from in-network providers. Once you have reached this limit, your plan will pay 100% of your expenses for in-network care.

With an HDHP, you can qualify for a tax-advantaged health savings account (HSA). You contribute funds to an HSA to be used for medical costs that HDHPs don’t cover. These funds are not subject to federal income taxes at the time of the deposit.

Most employers or plan sponsors will offer colleagues a choice between 2 or more of these types of plans. In 1988, 73% of covered workers chose a conventional health plan with the remaining enrolled in an HMO or PPO. Around 1999, the number of covered workers with conventional health coverage would drop dramatically to only 10%, the remaining workers would choose an HMO, PPO, or a POS. By 2009, the conventional fee-for-service health plan would become nearly extinct.

The PPO would make up the majority choice of covered workers since 1999, however, it is declining year over year. Around 2006, the HDHP would be developed and grew in use year over year, some of which is related to plan sponsors offering the HDHP as the only choice (Figure). 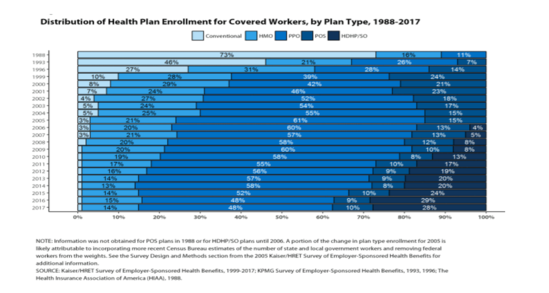 Nicole Kruczek earned her BS in Pharmacy degree from Temple University and is currently enrolled in the Masters of Pharmacy Business Administration (MPBA) program at the University of Pittsburgh, a 12-month, executive-style graduate education program designed for working professionals striving to be tomorrow’s leaders in the business of medicines. She has spent the last two decades in management roles in various pharmacy operations in long-term care, specialty, and PBM.