Diabetes is the seventh-leading cause of death in the United States.

Diabetes is the seventh-leading cause of death in the United States. In 2015, 30.3 million Americans had diabetes.1 Of these, 7.2 million had not received a diagnosis.1 About 1.5 million new cases are diagnosed each year in the United States.1 In addition, 84.1 million US adults had prediabetes.1

We are all familiar with the comorbidities associated with diabetes, such as amputations, diabetic retinopathy, heart disease, nephropathy, and peripheral neuropathy. But is there a correlation between diabetes and cancer? If there is, imagine the far-reaching effects that this association can have, given the growing number of patients with diabetes.

Epidemiologic studies have found a definitive relationship between cancer and diabetes. These studies have presented evidence that the causal factor may be a single factor or a combination of factors. Type 2 diabetes (T2D) can double the risk of contracting endometrial, liver, and pancreatic cancers.2,3 In addition, T2D can increase the risk of bladder, breast, blood (eg, non-Hodgkin lymphoma), and colorectal cancers by 20% to 50%.2 However, the risk of prostate cancer in men with T2D is decreased.2

Type 1 diabetes can increase the risk of stomach cancer and cervical cancer,2 in addition to the same cancers as T2D, though to a lesser extent.2

Modifiable risk factors include alcohol and tobacco use, diet, physical activity, and weight. Overweight or obese individuals have a higher risk of several types of cancers compared with people whose body mass index is within the normal range.4 The cancers consistently associated with overweight or obese patients are postmenopausal breast, colorectal, endometrial, esophageal, gall bladder, kidney, liver, and pancreatic.4 Decades of studies have proved that obesity has a direct association with insulin resistance and diabetes.4

Diet is an important risk factor for both cancer and diabetes. Diets high in processed and red meat and low in fruits, vegetables, and whole grains increase the risk of cancer as well as diabetes.4

Tobacco smoking is estimated to account for 71% of all bronchial, tracheal, and lung cancer deaths.4 Other cancers associated with smoking include bladder, cervical, kidney, laryngeal, leukemia, liver, pancreatic, stomach, and upper digestive.4 Smoking is also an independent risk factor for diabetes.5,6

Non-modifiable risk factors include age, ethnicity or race, and gender. Seventy-eight percent of newly diagnosed cancers in economically developed countries occur in patients 55 and older.4 The prevalence of diabetes also rises with age.4

Men have a slightly higher age-adjusted risk of diabetes. Although many cancers are gender-specific, such as cervical, prostate, testicular, and uterine, men are at higher risk for cancer overall.7

The incidence of cancer and diabetes varies widely among different populations, perhaps because of differences in genetic and other risk factors as well as medical procedures such as reporting and screening.4 The population most at risk for cancer and for diabetes is African Americans. For cancer, African Americans are followed by non-Latino whites, Latinos, Native Americans, and Asian Americans/Pacific Islanders, with the lowest incidence. For diabetes, African Americans are followed by Native Americans, Latinos, and Asian Americans/Pacific Islanders, which are all disproportionately affected compared with non-Latino whites.4

Carcinogenesis occurs when normal cells receive genetic “hits,” after which a full neoplastic phenotype of growth, invasion, and metastasis develops. Diabetes may influence this process through chronic inflammation, endogenous or exogenous hyperinsulinemia, or hyperglycemia.

Most cancer cells exhibit insulin and insulin-like growth factor (IGF) receptors, which are capable of stimulating cancer cell proliferation and metastasis.4 Insulin/IGF may also stimulate normal cells involved in cancer progression.4 In addition, hyperinsulinemia may work independently to promote carcinogenesis through its ability to increase circulating IGF receptors.8 Hyperinsulinemia also increases the bioavailable estrogen in both men and women, as well as testosterone in women but not in men.9 These higher levels of endogenous hormones are associated with a higher risk of endometrial and postmenopausal breast cancers.

Many cancers depend on glycolysis for energy, requiring high levels of glucose. The possibility exists that hyperglycemia allows neoplastic proliferation.

Here are some treatments:

Metformin, a biguanide, is the most commonly prescribed therapy in patients with T2D. Metformin reduces hepatic glucose output, thereby reducing circulating glucose and insulin. Results from studies show that metformin inhibits cell proliferation, reduces colony formation, and causes partial cell cycle arrest in cancer cells.11 A growing number of studies have shown that metformin treatment is associated with a reduced risk of cancer compared with other glucose-lowering therapies.12

Results of recent studies show no statistically significant increase or decrease in the risk of cancer of all sites when using TZDs to control blood glucose levels.13

Results from a small number of studies have shown an association between sulfonylurea treatment and an increased risk of cancer compared with treatment with metformin. However, it is difficult to determine whether this reflects an actual increase in cancer risk when using sulfonylureas or a reduction in risk in those treated with metformin.

No information has been published associating glinide secretagogues with cancer risk.

No published data indicate a relationship between incretin-based therapy and cancer risk.

Injection of exogenous insulin and insulin analogs results in significantly higher amounts of circulating insulin than endogenous insulin secretion. This may amplify the links between hyperinsulinemia and cancer risk.

A strong relationship exists between cancer and diabetes. Unfortunately, both diseases are complex and progressive—all the more reason for pharmacists to advocate for screenings for both diseases and help patients make informed decisions regarding their health.

Kathleen Kenny, PharmD, RPh, earned her PharmD from the University of Colorado Health Sciences Center in Aurora. She has more than 25 years of experience as a community pharmacist and is a freelance clinical medical writer based in Colorado Springs. 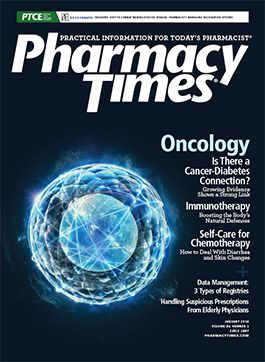