When using a therapy to clear the senescent cells, disease progression and cell death were stopped, according to the study.

A new study has found a rare population of potentially toxic senescent cells in human brains that can serve as a target for a new Alzheimer disease treatment, according to a Wake Forest Baptist press release.

According to the study, senescent cells are old, sick cells that cannot properly repair themselves and do not die off when they should, instead functioning abnormally and releasing substances that cause inflammation and kill surrounding healthy cells. The cells continue to build up over time in tissues throughout the body, contributing to the aging process, neurocognitive decline, and cancer.

The research, conducted in 2018, found that senescent cells accumulated in mouse models of Alzheimer disease where they contributed to brain cell loss, inflammation, and memory impairment. When using a therapy to clear the senescent cells, disease progression and cell death were stopped, according to the study.

“However, until now, we didn’t know to what extent senescent cells accumulated in the human brain, and what they actually looked like,” said study lead Miranda Orr, PhD, in the press release. “It was somewhat like looking for the proverbial needle in a haystack except we weren’t sure what the needle looked like.”

Using the sophisticated statistical analyses, the research team was able to evaluate large amounts of data. The total was tens of thousands of cells from the postmortem brains of people who had died with Alzheimer disease. The team found that approximately 2% of the brain cells were senescent and identified the type of cell and characteristic features.

Additional findings indicate that the senescent cells were neurons, which are the fundamental units in the brain that process information and are the power of memory.

Orr and the team then sought to determine whether the senescent neurons had tangles because these tangles closely correlate with disease severity, according to the study authors.

The team found that the senescent neurons had tangles but also overlapped to the point that it was hard to distinguish between them. Further, they validated the findings by examining a different cohort of postmortem brain tissue samples from people with Alzheimer disease.

“Now that we have identified these cells in the brain, we have opened the door to many possibilities, including treatment options for people with Alzheimer's,” Orr said in the press release.

According to the study, this therapy worked well in Alzheimer disease mouse models and has proven safe in humans with other conditions.

“Dr. Orr and her team are paving the way in senolytics research for Alzheimer’s disease, opening up a new target for potential treatments,” said Howard Fillit, MD, founding executive director and chief science officer of the Alzheimer Drug Discovery Foundation, in the press release. “This is especially exciting for the field as we now know we will need drugs that work against the many underlying biological processes that go wrong as we age—like the buildup of toxic senescent cells—that contribute to Alzheimer’s disease." 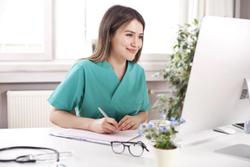