Flu vaccine market estimated to grow by $1 billion over the next decade.

A new report has found that the market for seasonal influenza vaccines will grow by almost $1 billion by 2025.

Physicians, pharmacists, healthcare providers, and other patient advocates recommend that everyone be vaccinated against influenza. This seasonal vaccine can prevent serious health complications associated with influenza, especially among elderly and very young patients.

For this season, the CDC is recommending that everyone aged 6 months and older be immunized, with the exception of patients who have severe allergies to the vaccination or anything in it.

“For the past few decades, children have not been the focus of season influenza immunization recommendations in developed nations,” said Christopher J. Pace, PhD, GlobalData’s Director of Infectious Diseases. “More recently, developed countries such as the US and the UK have issued expanded recommendations for the vaccination of healthy children and adolescents against seasonal influenza, thereby indirectly protecting high-risk groups such as the elderly and the immunocompromised from disease by disrupting community transmission. This generates a significant new opportunity for market penetration.”

The new report by GlobalData estimates that the market for the seasonal influenza vaccine will grow from $3.1 billion in 2015 to $4.3 billion by 2025 across the 7 major markets from a variety of different factors. The 7 major markets (MM) of the seasonal influenza vaccine include the United States, France, Germany, Italy, Spain, the UK, and Japan.

A growth of almost $1 billion dollars is quite significant, especially since this vaccination is not given year-round, and only during certain times of year.

The availability of quadrivalent vaccines will contribute a significant amount to market growth over the next decade. These vaccines contain antigens against 2 influenza type A and 2 influenza B subtypes, which expands protection that is offered by trivalent formulations.

Large growth will be seen among the 5 countries in the European Union due to an increased utilization of egg-based, quadrivalent vaccines. The market is expected to grow at a rate of 5.5% per year in the 5 European Union countries, reaching sales of $1 billion by 2025.

Moderate growth of 3.5% over the next 10 years is expected to reach $2.6 billion in the US, and Japan’s growth will be much slower at 0.3%, according to the report.

However, Japan has recently replaced its trivalent seasonal vaccination with quadrivalent formulations for the 2015 influenza season, and is a large driver of growth for the market.

Utilization of trivalent vaccinations among countries are also decreasing in the United States, and it is expected that trend will continue, according to the report.

While there will not likely be an uptick in vaccination rates, these newer quadrivalent vaccines are likely to increase growth through higher costs.

“Although the vaccination rate across the 7MM is anticipated to remain stable during the next decade, the higher price commanded by quadrivalent vaccines and other next-generation immunizations, such as Sanofi’s Fluzone High-Dose and CSL Limited’s Fluad, is expected to drive market growth,” Pace said.

Cell-based quadrivalent vaccinations are also an anticipated driver of growth for this market. Since the older egg-based vaccinations cannot be received by individuals with egg allergies, this opens up a vaccination option for this population.

Overall, great strides are being made to develop new vaccinations, as evident by new cell-based quadrivalent vaccinations that are largely driving costs.

“Novavax’s and Mitsubishi Tanabe’s novel virus-like particle vaccines are also anticipated to further revitalize an influenza market that is gradually moving towards the eventual development of a universal seasonal influenza vaccine.”

Despite enormous progress made already, the efficacy of the vaccines still needs improvement, according to the report. Influenza’s rapid antigenic drift, and an extensive manufacturing process all add treatment barriers to creating a more efficient and durable vaccine that could be implemented globally. 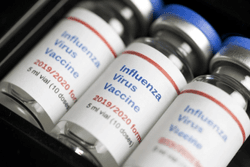