A policy from the Trump administration to benefit patients and alleviate the high cost of prescription drugs would eliminate rebates from pharmaceutical companies to pharmacy benefit managers.

companies to pharmacy benefit managers. However, there is still a lot of uncertainty around the rule, how it might actually benefit patients, how others in the industry might change behavior, and if January 1, 2020, is enough time to make these changes go live.

At Asembia’s 15th annual Specialty Pharmacy Summit, held April 30 to May 2 in Las Vegas, Nevada, 2 speakers from Deloitte Consulting LLP outlined what models are expected to result from the changes to rebates and how they will affect various stakeholders in healthcare.

The proposed rule would do away with retrospective rebates and require that they happen at the point of sale (POS), so patients benefit, explained George Van Antwerp, managing director at Deloitte. There are 2 models being discussed that would replace the current rebate system: a POS rebate model and an upfront negotiated discount price (NDP) model.

However, as part of that model, the pharmacy is out money, Coppola noted, because it is still acquiring the product at WAC.

“So, there needs to be some making the pharmacy whole,” he said. “But the mechanism by which they would be made whole is still unknown.”

He said the transaction processor who could fill that role might be played by PBMs or a wholesaler or Amazon—no one knows just yet.

According to Coppola, they expect that the new NDP model will accelerate biosimilars to the market because of the focus on the lowest price. Innovative therapies will also have an easier time getting access to patients.

“If you think about this rebate wall that exists today...if that goes away...the implications of that is that it opens the door, it levels the playing field for more innovative therapies to gain access to formulary,” he said.

For the PBMs, there is going to be a shift in business model as pools of revenue and profit from rebates disappear, said Van Antwerp.

While the government policy to eliminate rebates would only affect Medicare, there is the very real possibility that it could spill over into the commercial space or into Medicaid, he added. Without those rebates, there could be an increase in premiums from as little as 1% to as much as 25%, depending on which study you look at and what assumptions are used.

“The point is there will be some impact,” he said. “Rebates have been used to keep everybody’s cost, even the healthy people, down. Now you’re going to see only the people that have high brand usage [or] high specialty usage really be the people who see the benefit of the rebate, because they’re going to go directly to

Already, there is proposed legislation in the House about eliminating rebates in the commercial space, and states will look to drive that change even faster than the federal government, Van Antwerp said. He expects to see more adoption of POS programs in the commercial world.

There remains a lot of uncertainty around the policy, such as that January 1, 2020, start date; who can administer chargebacks to pharmacies; and whether or not pricing will come down. Van Antwerp also noted that this rule might be the end of value-based contracting as we know it because those contracts are very retrospective and tied to outcomes. There might need to be a caveat that those contracts are not part of the change.

“I think it’s an exciting time for those of you who like disruption and like being able to take advantage of the market changes,” Van Antwerp said. “What exactly will happen, how fast it will happen...is still up in the air.” 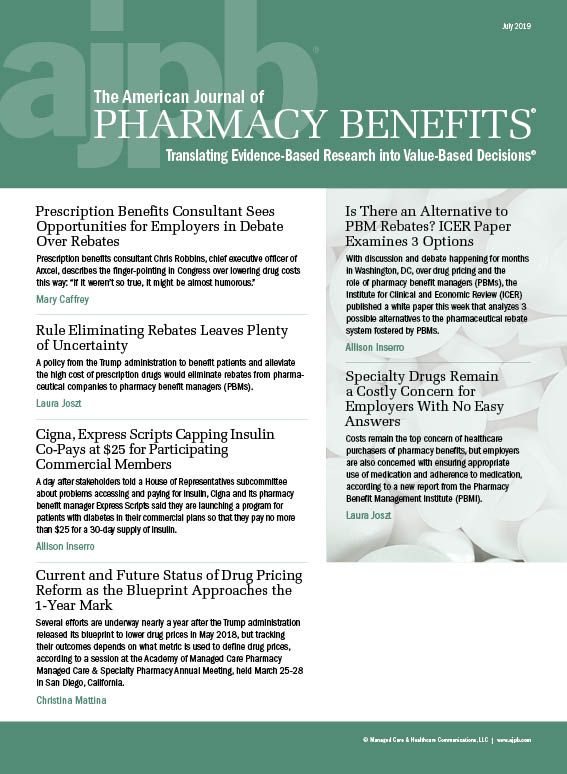