Poster at AACR highlights in vitro and in vivosynthetic lethality activity of rucaparib in multiple cancer cell types and PDX tumors that harbor genetic or epigenetic alterations in non-BRCA HRR genes.

A poster presentation of non-clinical data at the American Association for Cancer Research (AACR) Annual Meeting 2022 evaluating rucaparib (Rubraca; Clovis Oncology) in a panel of tumors with deleterious alterations in a core group of non-BRCA homologous recombination repair (HRR) genes produced efficacy findings similar to what was observed in BRCA1/2-altered models.

Rucaparib, a poly(ADP-ribose) polymerase (PARP) inhibitor, is approved for the treatment of patients with recurrent ovarian cancer or metastatic castration-resistant prostate cancer (mCRPC). The researchers noted that DNA repair deficiencies that result from genetic and epigenetic alterations in breast cancer 1 and 2 genes (BRCA1/2) cause tumor cells to be sensitive to treatment with rucaparib via a mechanism called synthetic lethality.

For the study, the investigators sought to evaluate the in vitro and in vivosynthetic lethality activity of rucaparib in multiple cancer cell types and PDX tumors that harbor genetic or epigenetic alterations in non-BRCA HRR genes.

BRCA1/2, as well as other genes, such as PALB2, RAD51C,and RAD51D, are key in HRR of DNA damage, with deficiencies in these genes potentially conferring sensitivity to PARP inhibitors, according to the investigators. In clinical trials, biallelic and monoallelic alterations in BRCA1 and BRCA2 have been linked to responses to PARP inhibitors; however, the importance of HRR gene aberration zygosity within the context of PARP inhibition remains unclear and may be gene dependent, according to the investigators. 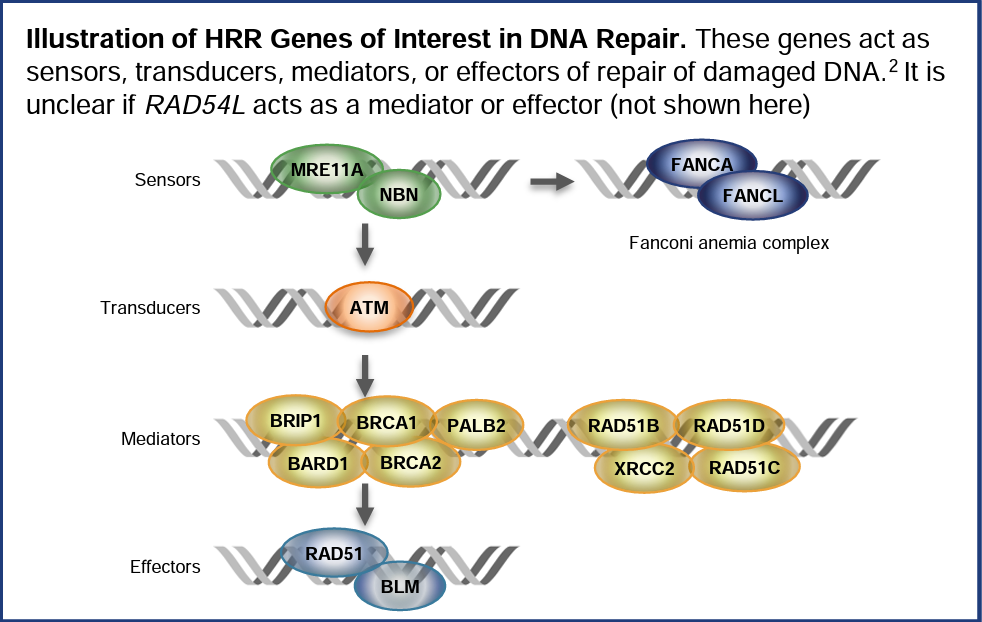 Transplantation of human tumor explants from patients to immunodeficient mice have been used as preclinical models for drug development. Patient-derived tumor xenografts (PDX) retain the majority of patient tumor characteristics, including histology and sensitivity to anticancer drugs. Prior research indicates that PDX models passaged in mice can match the response of the donor patient to standard cytotoxic anticancer drugs in >90% of cases.

In the current study, small interfering ribonucleic acid (siRNA) was used to knockdown a panel of 16 HRR genes in ovarian and prostate cancer cell lines. The investigators monitored gene inactivation for 24 hours post siRNA transfection by qRT-PCR, which showed an average of 80% loss of RNA expression. 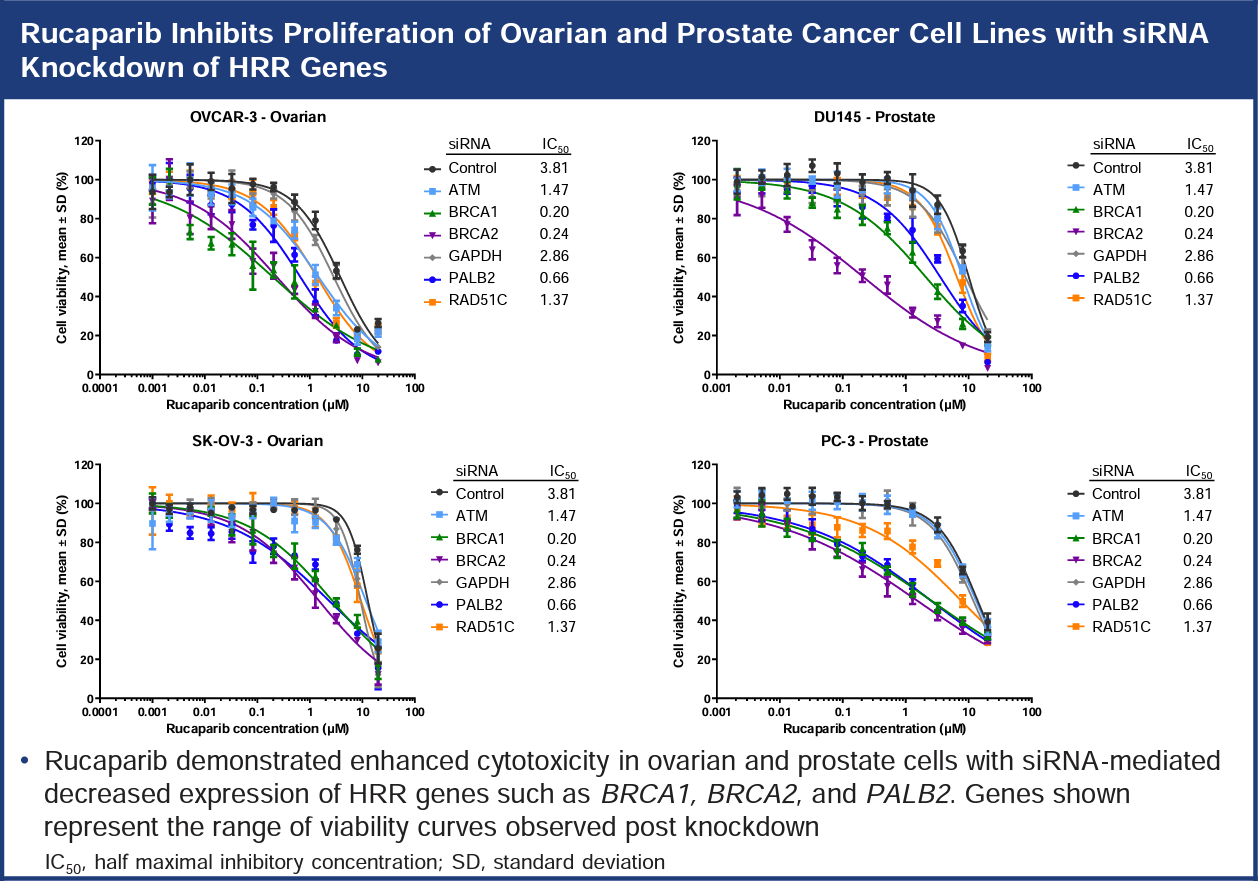 The investigators used siRNA to knockdown a panel of HRR genes to model the effect of their functional inactivation. Genes were selected based on the role they perform in DNA repair, sensitivity to treatment with PARP inhibitors, and the frequency of mutations in high-grade serous ovarian cancer and mCRPC.

The investigators found a significant rise in the potency of rucaparib, with the greatest increase observed in cells with siRNA-mediated decreased expression of BARD1, BRCA1, BRCA2, FANCA, NBN, PALB2, RAD51, RAD51C, and RAD54L, in which at least 1 cell line showed a <50% decrease in IC50. 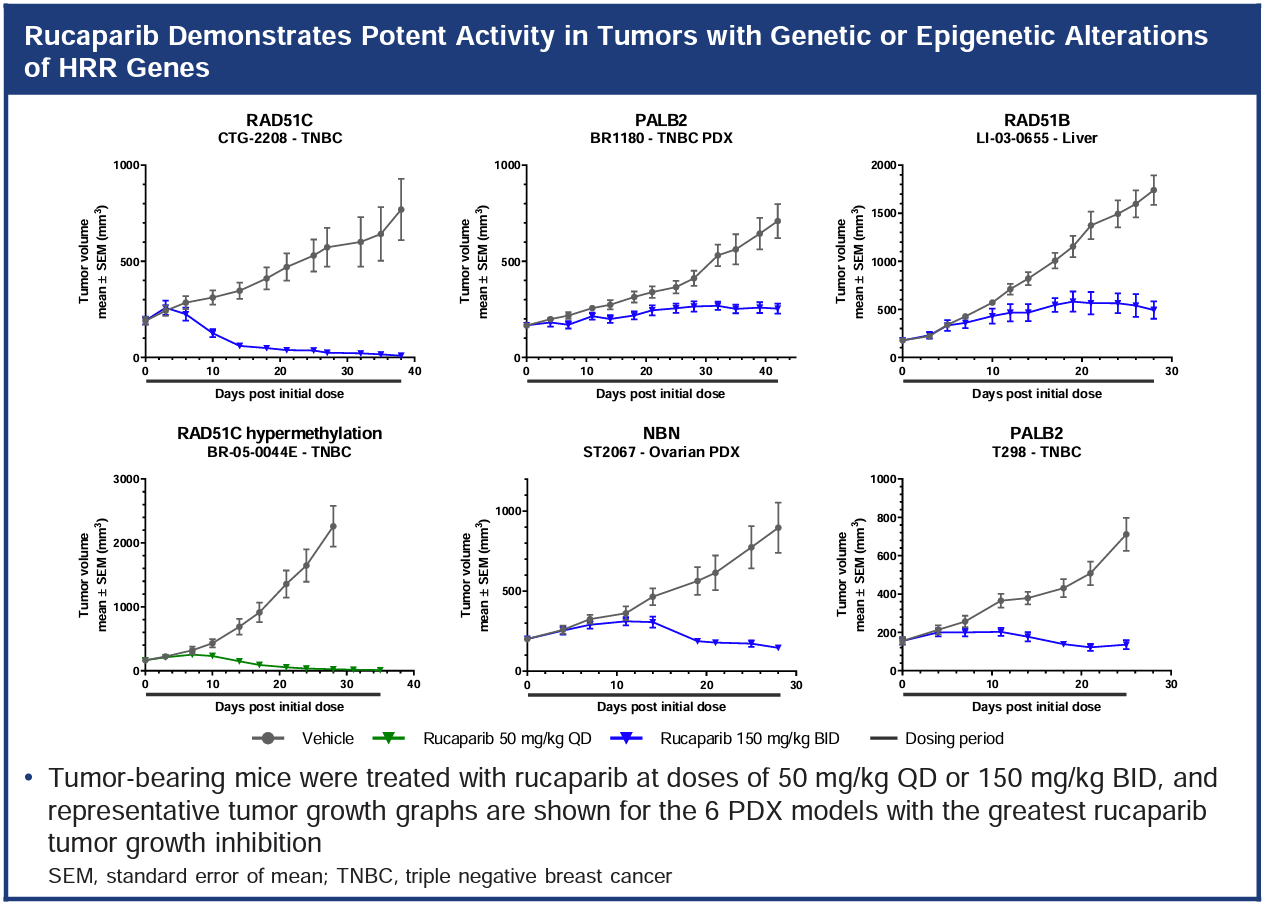 They added that the lack of effect of certain genes may be due to insufficient knockdown of gene expression for some genes and in some cell lines, with the threshold of inactivation for efficacy potentially varying by gene. The investigators observed that in vitro siRNA knockdown of a subset of HRR genes showed synthetic lethality with rucaparib treatment in ovarian and prostate cancer cell lines.

The efficacy of rucaparib shown in PDX models with deleterious alterations in a core group of non-BRCA HRR genes was found to be similar to the efficacy produced in BRCA1/2 altered models across different solid tumors, with enhanced sensitivity in biallelic altered tumors.

In a statement, Patrick J. Mahaffy, president and CEO of Clovis Oncology, added that Clovis is "committed to a greater understanding how patients with tumors associated with different genetic alterations may benefit from treatment with Rubraca."