Respiratory syncytial virus, or RSV, is the most common cause of lower respiratory tract infection (LRTI) and hospitalization in infants.1 Approximately 90% of all children are infected with RSV by 2 years of age. The terms bronchiolitis and RSV are often used interchangeably, since 80% of bronchiolitis cases are caused by RSV. 2 Although RSV has a very low mortality rate of less than 1%, it is associated with high morbidity. The estimated cost of bronchiolitis is up to $700 million in the United States annually.1 RSV infections generally follow a seasonal pattern with December through March being the peak time for infection in the United States.1

Most children with RSV will experience a mild upper respiratory tract infection that is similar to the common cold. Approximately 40% will progress to an LRTI.1 Children most at risk for severe disease requiring hospitalization are those born prematurely, those with congenital heart disease, and children with pulmonary disease such as chronic lung disease.1

On examination, patients with severe disease will have nasal flaring, retractions, and tachypnea along with rhinitis, cough, and wheezing. Severe cases of RSV are physiologically characterized by increased mucous production, acute inflammation of the respiratory tract, edema, and necrosis of epithelial cells within the bronchioles. Ultimately, the airways become obstructed, which results in a characteristic wheeze accompanied by hypoxia and hypercapnea.1

The diagnosis of RSV is typically made from clinical observation and history (Table 11,3). Although laboratory studies, such as rapid antigen testing, may be useful in excluding other infectious causes, these results will rarely alter management. For this reason, the American Academy of Pediatrics (AAP) recommends deferring from the use of routine laboratory and radiologic studies when diagnosing bronchiolitis.1 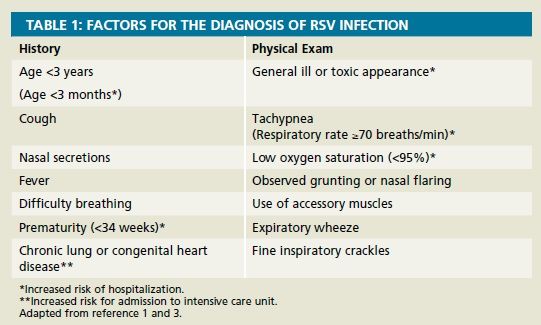 The mainstay of RSV treatment remains largely supportive. Intravenous fluids are usually warranted to maintain hydration. Children with RSV are susceptible to dehydration due to fever. Supplemental oxygen is appropriate for children with oxygen saturations <90%. Nasal suctioning with saline removes upper airway obstruction and provides symptomatic relief, particularly prior to feeding.4 The saline helps to thin mucous, making suctioning more effective. However, deep suctioning should be avoided, as it may increase nasal edema and cause obstruction.1,4 Nasal decongestants have not shown any benefit and should not be used in children less than 2 years of age.5

Several pharmacologic therapies have been studied for the treatment of RSV, but few therapies have demonstrated consistent benefit. The economic burden of RSV is directly related to the length of hospital stay, therefore most bronchiolitis studies examine length of stay as the primary outcome.

Bronchodilators are not recommended for routine use due to lack of consistent efficacy. However, beta agonists such as inhaled epinephrine and albuterol are commonly integrated into hospital bronchiolitis protocols due to the potential benefit for some patients. Bronchodilators do not alter the course of illness and should only be continued in children that demonstrate clear benefit from their use.1

Corticosteroids are utilized in approximately 60% of patients admitted to the hospital. 1 However, inhaled and systemic corticosteroids have failed to demonstrate statistical improvement in hospital length of stay, clinical score, or readmission rates in clinical trials. Therefore, routine use of corticosteroids in RSV is not recommended.1,3

The role of ribavirin for the treatment of RSV is highly controversial. While ribavirin has demonstrated marginal benefit in sub-populations, there is considerable burden and risk associated with its use.1,6 Nebulized ribavirin must be administered in a well-ventilated room, usually negative pressure, and via continuous aerosolization up to 18 hours per day. Ribavirin poses serious risk to pregnant health care workers, as it is a pregnancy category X medication and is a nebulized formulation. Additionally, it is quite expensive. Ribavirin may have a role in patients with severe infection who are immunocompromised or that have cardiopulmonary disease, but routine use of ribavirin is not recommended.1,6

There is currently no recommendation from the AAP regarding the use of nebulized hypertonic saline (NHS) for RSV treatment. However, several recent randomized trials and a Cochrane meta-analysis have demonstrated improvement in clinical score and a significant reduction in hospital length of stay from NHS therapy.7-13 The ability to reduce hospital length of stay by approximately 1 day and the affordability of NHS make it an attractive therapy for RSV. Some practitioners may be hesitant to utilize NHS due to the potential for bronchospasm. This risk may be minimized by pre-treating with a bronchodilator.

Antibiotics should only be administered to children with secondary bacterial infection (SBI).1,3 Observed rates of SBI from retrospective studies have been between 0% and 3.7%.1 Recent studies have investigated the role of macrolides in RSV infection due to their anti-inflammatory properties. At this time, there is no evidence of significant benefit that would outweigh the cost and potential for bacterial resistance to recommend routine use of macrolides for RSV infection.15-17

Montelukast, a leukotriene receptor antagonist (LRA), has also been investigated for the treatment of RSV. It has been hypothesized that the anti-inflammatory action of LRAs may ameliorate symptoms and alter the course of infection. However, LRAs have demonstrated inconsistent benefit in currently published trials.3,18,19 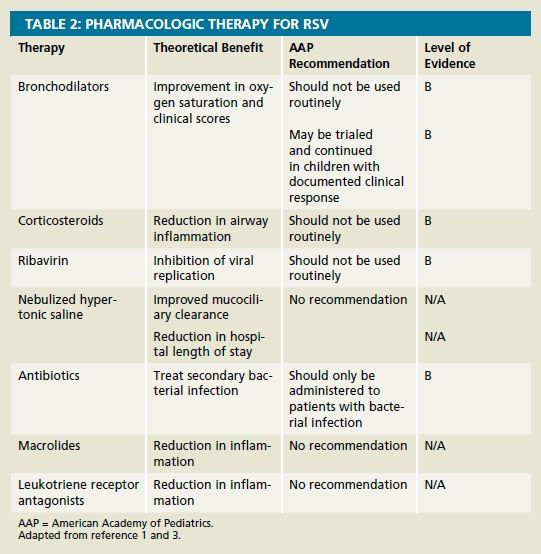 Basic prevention of severe RSV infection involves good hand hygiene, eliminating cigarette smoke exposure, minimizing the infant’s exposure to other children asmuch as possible, and avoiding contact with other infected individuals. Additionally, breast-feeding should be recommended, as it decreases the risk of RSV acquisition as well as other lower respiratory tract infections.1

Proper patient selection for palivizumab therapy is an area where hospital pharmacists play a major role during RSV season. Palivizumab is an intramuscular (IM) injection that decreases the rate of hospitalization from RSV infection in high-risk patients by about 50%.18,19 Palivizumab is dosed at 15 mg/kg/dose IM once monthly during the RSV season for a maximum of 5 doses. Palivizumab is expensive and should only be administered to patients most likely to benefit from its use. It is recommended that hospitalized infants at risk for severe RSV receive palivizumab 48 to 72 hours prior to discharge. Guidelines for palivizumab therapy are listed in Table 3.1,18 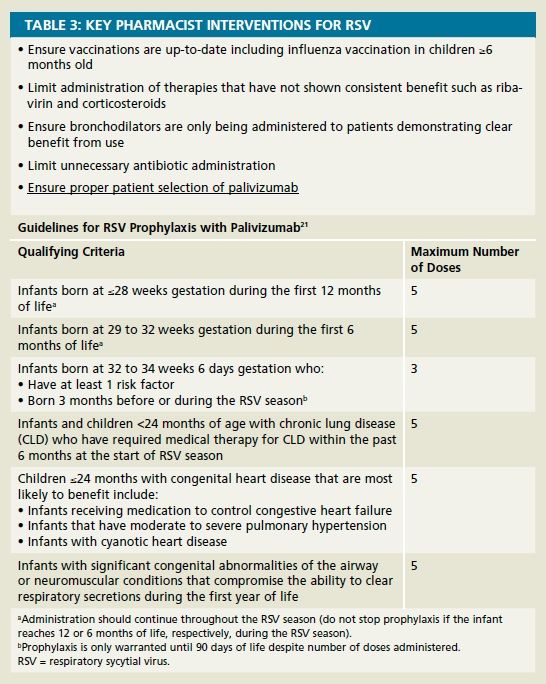 Research is currently being targeted at formulation of an RSV vaccine. Although it does not appear that there will be a commercially available RSV vaccine in the near future, it is clear that hospital pharmacists will undoubtedly play an integral role in proper utilization of the product once it is available.